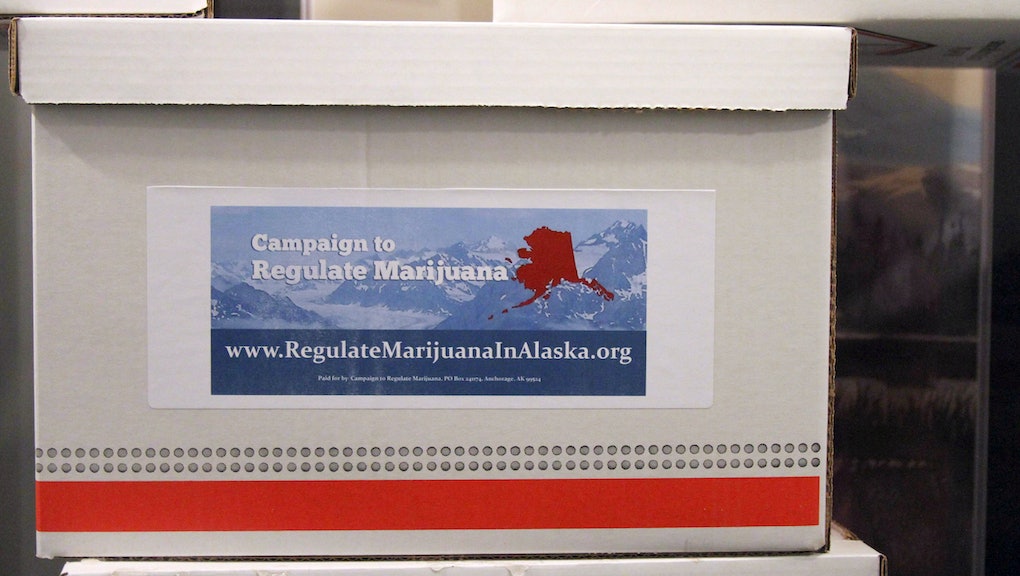 If Alaska Legalizes Marijuana This Week, Here's What Will Happen to the State

The news: Voters in Alaska have 7 million reasons to legalize marijuana, according to a new report.

That's how much money, in tax dollars, the state will bring in if legalization passes, according to the Marijuana Policy Group, a Colorado-based collection of researchers and economists focused on examining the impact of marijuana legalization on state economics.

Alaska's legalization measure would allow residents 21 or older to purchase up to one ounce of pot and grow up to six plants at home. Similar measures did not pass in 2000 and 2004, though Alaska did legalize medical marijuana back in 1998.

The report predicts that the $7 million in state tax revenue will come as a result of 4 metric tons of pot being sold in the first year of legalization. But it's only supposed to go up from there.

The numbers: The 4 tons figure represents less than 25% of the predicted marijuana consumption in Alaska. Adults there consume about 18 tons of marijuana a year.

The change won't be immediate. Given Colorado's example, people who are used to getting their marijuana illegally aren't suddenly going to drop everything and race for the stores, especially because legal marijuana, given its tax status, tends to be more expensive.

"Previous studies incorrectly assume that all demand will quickly shift to regulated markets," the report said. "In our experience, such assumptions are naïve."

The scales will likely tip, though. By 2020, the report forecasts, the state will be making $23 million in taxes off 13 tons of weed. Overall, the experts predict $55 million in legal marijuana sales the first year of legalization, with nearly double that to come in 2020.

The vote: None of this matters, of course, if the ballot measure doesn't pass. And recent data suggest that the vote is up in the air. Two polls published last month showed different results. One from Dittman Research saw 53% of respondents opposed, while another from pollster Ivan Moore saw 57% in support. Keep in mind that each poll was sponsored by whichever side of the campaign appeared to be winning. (Surprise!)

Oregon and (to a more limited extent) Washington, D.C., are voting on legalizing marijuana in November. Florida will be voting on allowing it for medical uses. Chances are at least some lawmakers in every state considering legalization will be looking at these revenue projections and salivating.