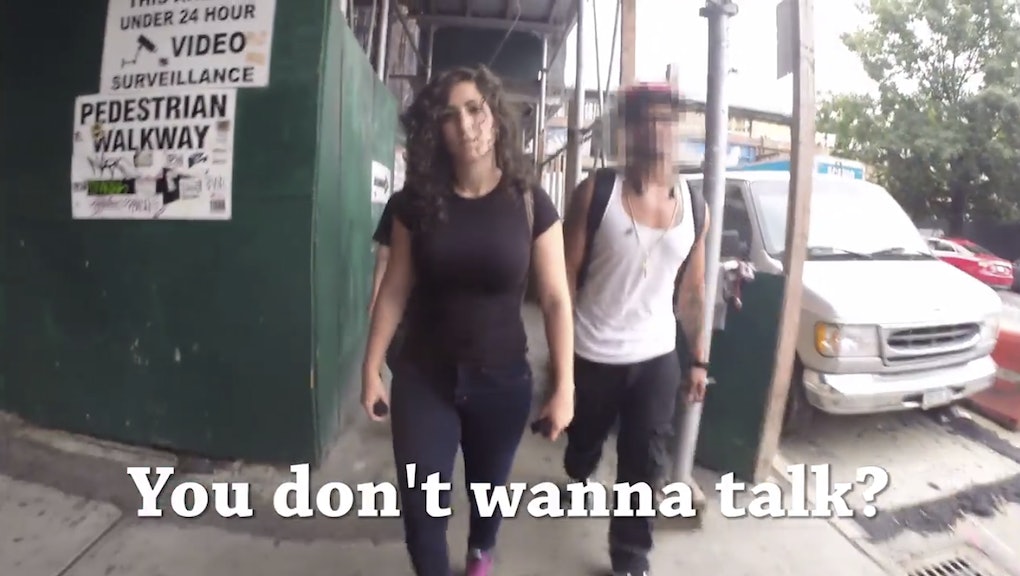 If Anyone Tells You Street Harassment Isn't a Problem, Show Them This Video

A woman often hears that street harassment isn't a big deal. She's assured that it's not as bad as it's made out to be. She's laughed at when she complains about it. She's asked why she can't take a compliment. She's told that because it's not violent, it's not a problem. She's instructed to put up with it and "let men be men."

When it comes to catcalling, being a woman means constantly hearing that your fears and opinions don't matter.

Of course, any woman who's ever been victim to this kind of provocation can tell you that it is, in fact, a problem. But if you're not a woman, or you've never been a target, it can often be hard to believe — after all, how can this sort of thing possibly happen to millions of people on a daily basis? If it was that bad, wouldn't something have been done by now?

Luckily, we have hidden cameras to help educate those who think that because they don't see it, it doesn't happen.

The above video follows a woman for 10 hours as she walks around New York City, dressed in jeans and a T-shirt. It notes that she received over 100 instances of verbal street harassment over the course of the day, and that doesn't even include winks, whistles and other non-verbal forms of aggravation.

Shot and produced by Rob Bliss for Hollaback! a movement to end street harassment, Shoshana B. Roberts hears linguistic gems like "Somebody's acknowledging you for being beautiful! You should say thank you more!" and "You don't wanna talk because I'm ugly?" She's also followed by the same man for five straight minutes.

As Hollaback! argues, "Street harassment is a 'cultural' thing in the sense that it emerges from a culture of sexism — and unfortunately — that is everyone's culture."

It illuminates a harsh truth. The clip itself is only two minutes long, with a clear beginning and end, but the reality for many women is even scarier. Street harassment doesn't occur in a vacuum — it's always present, and it's so ingrained that harassers often don't recognize the problematic nature of their behavior.

Similar to "Creepers on the Bridge," the video that revealed what it was like to walk around alone as a woman in Cairo, Bliss' project captures street harassment as it actually happens. There's no pretending here: The camera, of which they're blissfully unaware, captures everything.

Throughout it all, Roberts stays silent. Though this is likely a conscious choice — the video is a PSA of sorts, after all — it reflects the helplessness many women feel at the hands of catcallers.

Of course, when you're constantly told that your fears are unfounded, despite proof to the contrary, is it really any wonder why?