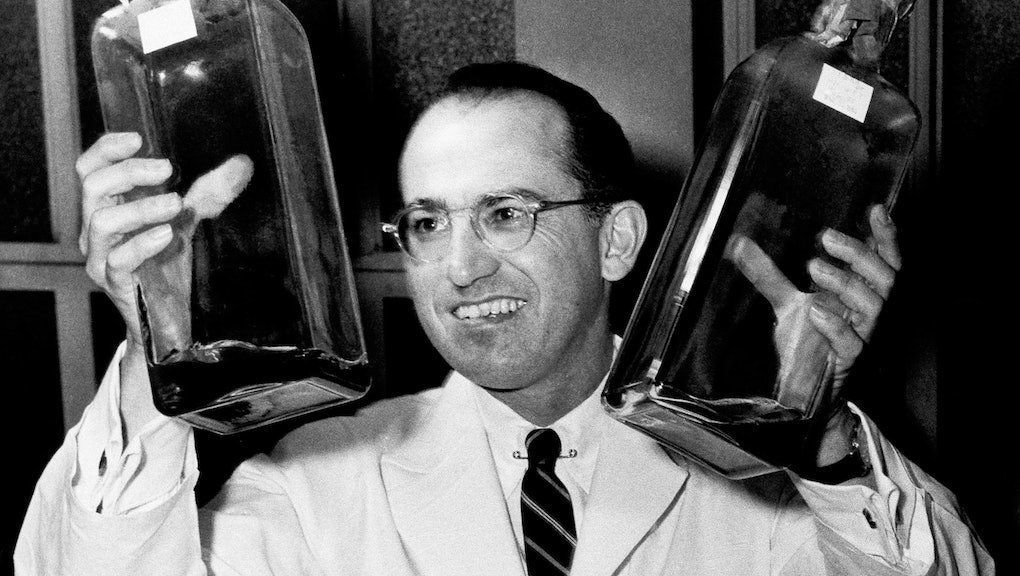 The Best Way to Remember Jonas Salk, Polio Pioneer, on His 100th Birthday

Today's Google Doodle is a nice way to honor Jonas Salk. An even better way? Vaccinate your kids.

Salk, who would have been 100 years old Tuesday, invented the polio vaccine. His work led to the disease's becoming nearly extinct and earned him numerous medals and accolades. Salk actually turned down a ticker tape parade in New York City and told Edward R. Murrow in 1955 that he didn't want to patent the vaccine. "There is no patent," he said. "Could you patent the sun?"

Yet Salk's breakthrough, along with plenty of others, have been forsaken by crowds of people who, whether through parental paranoia or disinformation campaigns, refuse to have their children vaccinated.

The background: Polio was a major part of life in the 1940s and '50s, crippling more than 35,000 Americans a year, according to the Centers for Disease Control.. The social toll was greater still, with people refusing to let children play outside or travel to other cities. Occasionally, an outbreak forced entire towns to be quarantined..

Salk's big innovation was working with a "killed" virus rather than a live one, making it harder for test subjects to catch the disease — a huge problem in previous polio experiments. His vaccine was eventually tested successfully.

Almost as important as Salk's work to stop the disease was the public relations campaign necessary to spread awareness about the vaccine. More than 650,000 children were vaccinated, thanks in large part to television appearances by Salk, encouragement from the government and even a pro-vaccination campaign by Disney.

What's changed: Now, though, there are plenty online who would accuse Salk of just being another member of Big Pharma. Despite the huge successes of vaccines for diseases like polio, smallpox and tetanus, some in the U.S. seem more scared than ever to get their children vaccinated.

This has led to fears of comebacks for diseases previously thought to be eradicated. This year has seen a ridiculously high number of measles cases, for instance, that experts attribute to vaccine refusals.

While "herd immunity" can keep most children safe, its effect is lessened for every parent who voluntarily opts out of vaccinations. So no matter what kind of literature you get trick or treating, follow Salk's lead instead.