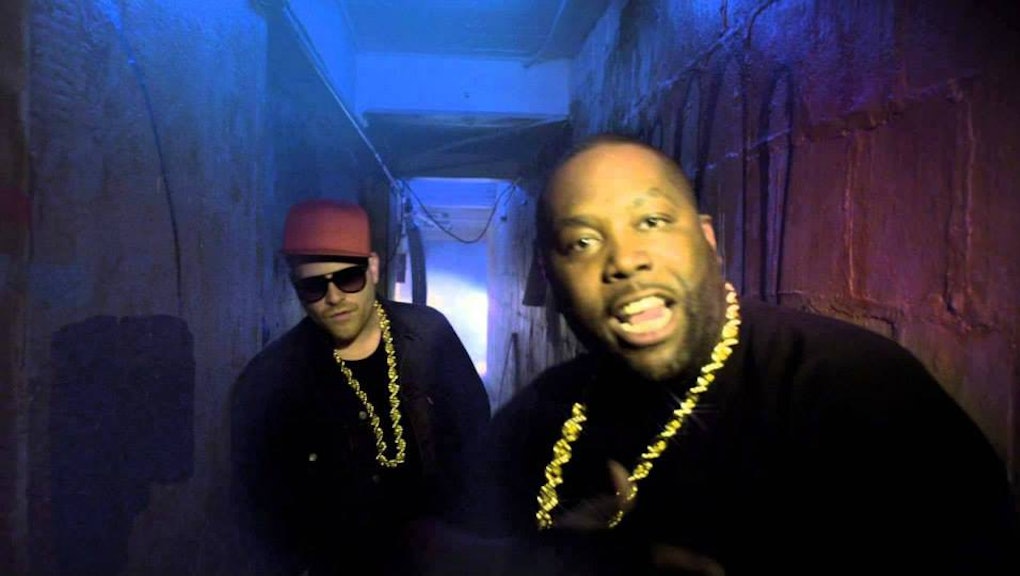 Run the Jewels Will Forever Change the Future of Hip-Hop

The worst thing about the hottest new album in hip-hop, Run the Jewels 2, is the music.

That isn't saying much — the album is unbelievably good. But the group's quirky-as-hell marketing campaign is even better. A string of seemingly absurd ideas have proven so effective that it launched an album almost nobody would have heard about into the very center of the hip-hop mainstream.

It isn't just an album, though, it's a movement. And it's laid a whole new blueprint for how hip-hop will sound and how rappers will market albums for years to come.

El-P originally came up with the idea for an all-cat remix album while he was high and messing around on Twitter. He never thought much of it until a Redditor from r/hiphopheads put together a Kickstarter campaign that sought to collect $45,000 to produce the album. Then he realized just how far the Run the Jewels project could go.

Since the remix album's inception, some of the biggest names in hip-hop have come together to make it a reality. Just Blaze, the famed producer behind Jay Z's Blueprint and Black Album, promised he would release collections of drum samples he used for those albums if Meow the Jewels reached its funding goal. Boots, the mysterious producer who produced 80% of Beyoncé's latest album, said he would contribute and help mix the project. Portishead's Geoff Barrow, Prince Paul (of De La Soul fame), Skywalkr (Danny Brown's DJ), The Alchemist and Zola Jesus also offered the talents to the cause.

And against all odds, the project got funded. Now El-P is stuck with the unenviable task of auditioning cats to sample for the new album. In a hilarious celebratory video, he hit New York City's BARC animal shelter to find contenders, and in doing so, helped raise awareness about their mission to find homes for the Brooklyn borough's homeless feline population. Because El-P can do no wrong.

Run the Jewels is all about alternative releases, though. Deeper into their web store, there's a series of increasingly pricey "BONU$" packages ranging from the $7,500 "I'm On the Fucking List, Asshole" package (promising, "We will share our weed with you and let you yell at our tour manager. We will pretend to like you and will introduce you to our friends as our 'friend'") to the $50,000 "Mystery Time Supreme!" package ("Run the Jewels will start a private detective agency and make you an employee for a month where you and run the jewels will work together to unravel local mysteries but mostly just smoke weed in the back of your van") and the $10 million "Run the Jewels Retirement Plan Package" ("Run the Jewels will retire from music, making only one song a year for you personally. Every song title will be your name with a number next to it").

Every part of their campaign has been carefully plotted — to the point where even the descriptions in the Web store are hilarious and some of them (like the cat album) actually come true. They also launched the "Tag the Jewels" project, in which Run the Jewels invited 30 artists from around the world to paint murals inspired by the album's artwork. The results are almost as badass as the music itself.

And it paid off. When the album leaked — as hip-hop albums often do — Run the Jewels handled it better than most. Instead of letting the leaker get the last laugh, Killer Mike and El-P kicked album promotion into high gear by pulling a casual Beyoncé. They surprise-released the album — for free. When they posted an interactive map of where the artwork came from, the music's potential reach became suddenly clear.

This is what all album promotion should look like in the 21st century. Run the Jewels made full use of the deeply collaborative, multimedia capabilities of the Internet to spread good music, uncorrupted by pop hooks or other safe radio conventions. When artists create their own platforms, they don't have to compromise anything about the sound for the radio.

Run the Jewels' music is raw, highly political and subversive rap — the kind that should be enjoying the reach of Drake and Rick Ross. They're proving to musicians everywhere that, if you focus on your distribution as much as your music, you'll find the audience you need.