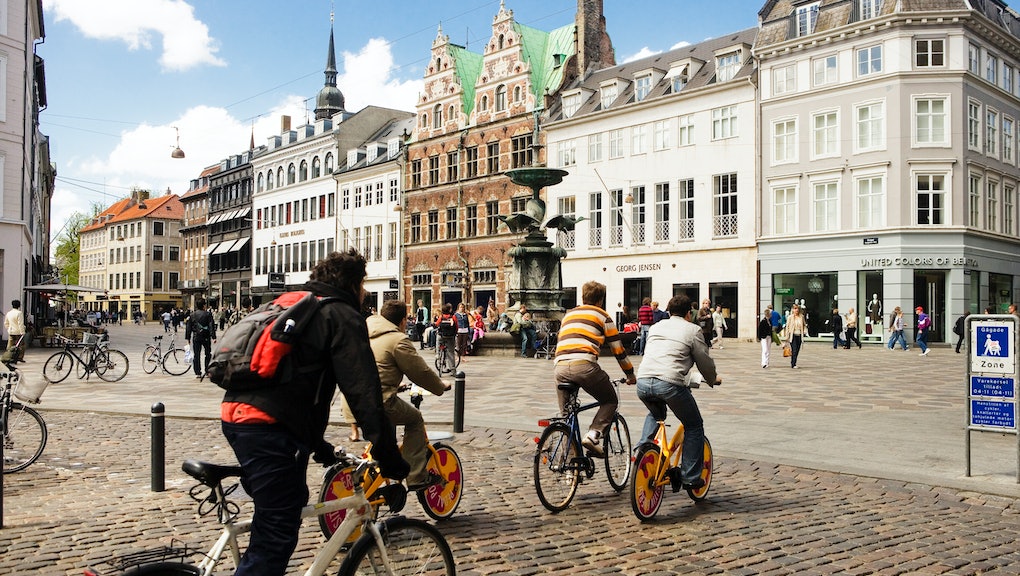 Flipping burgers isn't considered a way to make a decent living in the United States: It's a summer job for teenagers, an entry point into the workforce for immigrants or a way to scrape by while working another job.

But fast-food workers in Denmark make the equivalent of $20 per hour; a Burger King employee has enough money to pay rent, go out with friends and still save a bit of money, according to an extensive report in the New York Times.

And their experience can teach the us a lot about how to pay workers a decent wage for honest work.

Working to live: The quality of life for fast-food workers in the small Scandinavian nation is astonishing — it includes a host of benefits that even well-paid American workers would envy. As the New York Times reports, under the industry's collective agreement, employees are guaranteed five weeks of vacation, paid maternity and paternity leave, a pension plan and paid overtime for work after 6 p.m. and on Sundays. In contrast to American wage earners, Danes often receive their work schedule a month ahead of time.

Denmark doesn't officially uphold a minimum wage, but it has very high union density — roughly two-thirds of workers are in trade unions, which gives organized labor a great deal of leverage in negotiating the base wage that workers can be paid in many industries.

According to the New York Times, Denmark's 3F union, the largest in the country, has an agreement with the employers group Horesta, which includes many restaurants including Burger King, that the lowest a fast-food worker can be paid is $20 an hour. In exchange, unions and employees are expected to not engage in any kind of militant or disruptive practices such as strikes or boycotts.

"Sometimes I ask, 'Do I buy food or do I buy them clothes?' If I made $20 an hour, I could actually live, instead of dreaming about living."

Living to work: Contrast this to the United States. In America, fast-food workers average a wage of $8.90 an hour. A fifth of them live below the poverty line, and nearly 90% do not receive health benefits through their employer. There is no legally guaranteed paid vacation, in the U.S., so an employee is at the mercy of their employer; the Center for Economic and Policy Research has found that in the bottom fourth of earners, most workers don't get any paid time off at all.

Earning wages so far below what's needed to live poses enormous challenges for people who work at these restaurants.

Anthony Moore, a shift manager at a Burger King in Florida, shared the struggles of being a single father on a wage of $9 an hour with the New York Times: "Sometimes I ask, 'Do I buy food or do I buy them clothes?' If I made $20 an hour, I could actually live, instead of dreaming about living."

Is this possible in America? Comparisons between two different countries with countless differences in  size, economy and culture is tricky business, and the success of the $20 wage in Denmark doesn't translate readily into an identical policy prescription for fast-food workers in the U.S., who have been campaigning nationally in recent months for a higher wage at $15 an hour.

But it's clear that paying much higher rates to workers at fast-food restaurants doesn't destroy the economy's employment rate or render fast-food restaurants unprofitable, and it provides a degree of dignity to lives that Americans largely assume is impossible for those living on the margins of society.

Larry Mishel, president of the Economic Policy Institute, doesn't think the takeaway from the Danish experience is simply instituting a $20 wage in the U.S., but that another economy is possible if wages are designed to match productivity.

"The point is that one can have a modern, productive economy at full employment where low-wage workers earn a decent living. The U.S. could have evolved this way but didn't because the political power of those aligned with the most income, wealth and influence took us a different path," Mishel told Mic.

"We can't easily or quickly get from where we are to the Danish-type situation. But one can see how we can afford much higher wages by comparing productivity growth to the rise in the value of the minimum wage since 1979 or so  — or back to 1968."

Mishel is right that this is bigger than raising the wage. Higher pay for fast-food workers isn't an end unto itself, but one component of how our political economy needs to evolve is in distributing the fruits of productivity to everyone — not just the rich. In that sense, Denmark can teach the U.S. some lessons about just how to accomplish that goal.