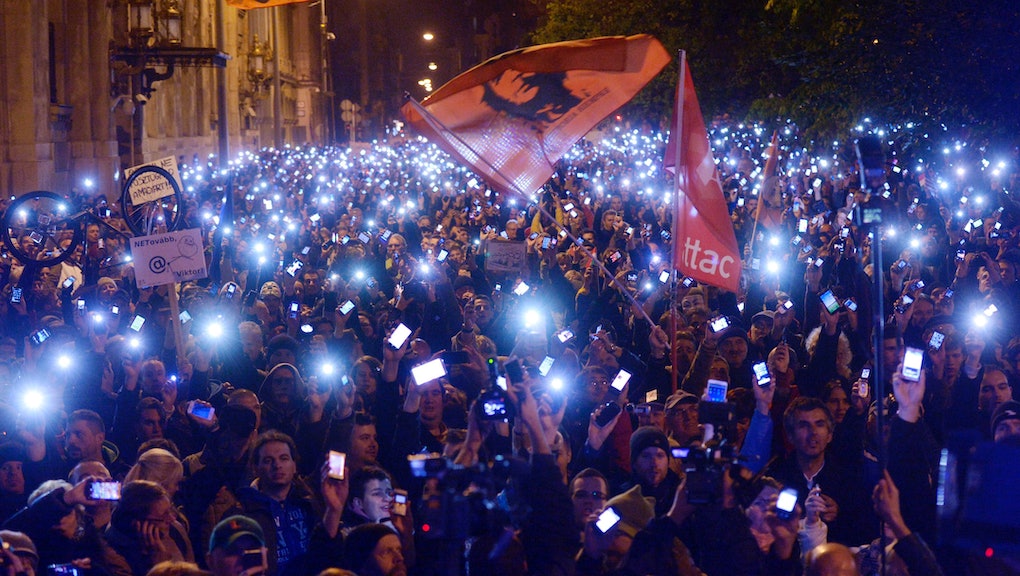 The news: Tens of thousands of Hungarians marched Tuesday in Budapest to protest the government's plan to tax Internet use. The government claims the tax will help reduce the country's debt, but many Hungarians just see it as an effort to restrict their freedom of speech and expression.

Protesters held up makeshift banners that read "ERROR!" and "How many times do you want to skin us?" Reuters reported. More than 100,000 Hungarians rallied in what experts say shows a growing discontent among younger citizens against Prime Minister Viktor Orban's policies to centralize power and shrink private enterprise.

Amid the growing public outcry, Orban's administration has denied any anti-democratic agendas.

Background: The government announced the proposal last week without consulting any of Hungary's industry groups. The association of cable companies, of communications service providers, of informatics and electronic firms "all called upon the government to reconsider the plan," the Wall Street Journal reported.

Perhaps that's because, in addition to reducing the debt, Orban's lawyers explained, the Internet tax is supposed to curtail telecommunications companies' allegedly large profits. Revenues from these taxes would then be diverted into improving Internet access in rural areas, the government claims.

Unsurprisingly, not everyone was swayed by the government's slick rhetoric. Though there were democratic elections, there was only one party for voters to cast their ballots, a tightening grip of power led by Orban. And besides, most Hungarians see the tax as an undue burden.

"I am a student, my parents are not well off, neither am I, so I work hard," Ildiko Pirk, a 22-year-old studying nursing, told Reuters. "I doubt the Internet companies won't build this tax into their prices. And I have a computer, a smartphone, as does my mother and my four siblings. That adds up."

Though the government's initial proposal was to tax Internet traffic at $0.62 per gigabyte, Orban agreed to reduce the rate after Sunday's protest.

Many are skeptical that the government will further reduce the cost and rescind the proposal because of previous taxes on banking, retail and energy and telecommunications.

Why it matters: This week's protest was the largest demonstrations since Orban's administration was elected in 2010, but it's likely the fight for the free flow of information will continue in the coming weeks.

"Those who use the Internet see more of the world, that's why the government doesn't want a free Internet," organizer Balazs Gulyas told the crowd, according to Bloomberg. "We're not going to pay an Internet tax to a corrupt tax authority."

It's not just Hungarians who are worried about threats to the Internet. Preserving a free and open Internet is a major issue in the U.S., where the debate on network neutrality pits consumers against large telecom companies that aim to exploit technologies by monitoring and controlling data sent via their networks. Certain companies will have to pay to use "fast lanes," a paid prioritization model that will make companies pay for better, smoother access for consumers.

In addition to potentially rising costs, telecom companies including Comcast, Verizon and AT&T are also censoring information, according to evidence of abuses gathered by the American Civil Liberties Union. In late 2007, Verizon Wireless took away access for a text-messaging program by the pro-abortion rights group NARAL, which the group used to send messages to its supporters.

In the same year, Comcast, the nation's largest cable TV operator, discriminated against an entire class of online activities by blocking file transfers from customers using popular peer-to-peer networks such as BitTorrent, eDonkey and Gnutella.

To prevent against blocking or discrimination, the Federal Communications Commission acted in recent years to enforce rules. But in January, a major court decision stripped the FCC of its power to enforce network neutrality protections under the regulatory framework it was using, the ACLU documented.

If the FCC's proposal passes at the end of the year, it would end up greatly restricting how Americans use the Internet.

During the height of the Arab Spring in the Middle East, Secretary of State Hillary Clinton declared that Internet access was a fundamental human right. For the thousands of Hungarians that took to the streets this week — and thousands of Americans fretting over net neutrality at home — these policies aren't just an inconvenience: They're a threat to democracy as we know it.