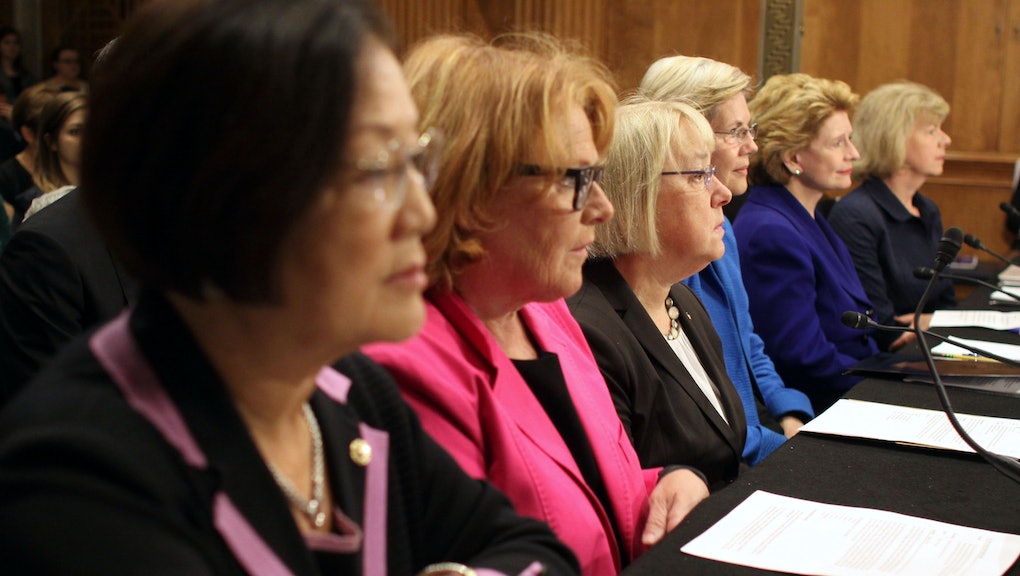 The midterm elections are shaping up to be a historical opportunity to increase female representation in a historically male-dominated Congress.

The male-to-female ratio in the House and Senate could reach "an unprecedented 1:5" when new members are sworn in, according to an analysis by the Center for American Women in Politics, reported by TIME.

There are currently 79 women in the House and 20 women in the Senate, comprising 18.9% of total members. Fifteen women are running for the Senate across the country (most are challenging incumbent senators: 16 of the 20 female senators in the Senate aren't up for re-election this year), and 161 women are running for House seats. Depending on how many female candidates emerge victorious on Election Day, women could account for over 20% of members of Congress for the first time.

This increase is part of a larger trend of increased female representation that goes beyond Congress. State legislatures across the country have increased female membership over the past 40 years:

And the percentage of women in Congress has increased, as well:

Reason for the increase: As a Gallup poll from July demonstrates, Americans are ready for more women to take the reins. The poll revealed that 63% of Americans believe the country would be governed more effectively with more women in positions of power:

Studies have shown women politicians may be better suited to establishing a bipartisan agenda than their male counterparts. Researchers from the University of Virginia recently examined every House bill between 1973 and 2008 and found that female members of the minority party in the House were better at crossing party lines to find common ground on legislation. Women's effectiveness trumped that of male politicians by as much as 33%.

Considering partisan gridlock is worse than ever, this is even more of a reason to celebrate women's increased presence. But the upward trend doesn't mean that the battle for equality is over.

Roadblocks ahead: One troubling obstacle has to do with Senate committee chairs. Committee chairs are powerful positions and wield a lot of influence in setting the national agenda. They can open investigations, call hearings and shape legislation before it reaches the full Senate. If the GOP takes control and installs new committee heads, it's likely that just 1 of the 16 standing committees in the Senate would be led by women, according to the National Journal.

That's a huge drop. Under the Democrats, one-third of all committee chairmanships in the Senate are held by women.

Obstacles to more equal treatment extend beyond numerical representation. A Republican-controlled Senate could lead to serious setbacks on policy issues that are traditionally labeled "women's issues" but are actually important to everyone. Issues such as minimum wage, paid family leave and affordable child care won't get the same attention from Republicans as they have from Democrats. Just last month Republicans blocked equal pay for women — for the fourth time.

But here's to a historical midterm election and to continuing the upward trend of electing women to Congress. Just keep in mind that marking one historical milestone doesn't mean the hard work of ensuring gender equality is over. It's just beginning — 20% is still not representative of the American population, which is 51% female.

But we're moving in the right direction. Women have made it this far, and we're not going to let setbacks stop us now.