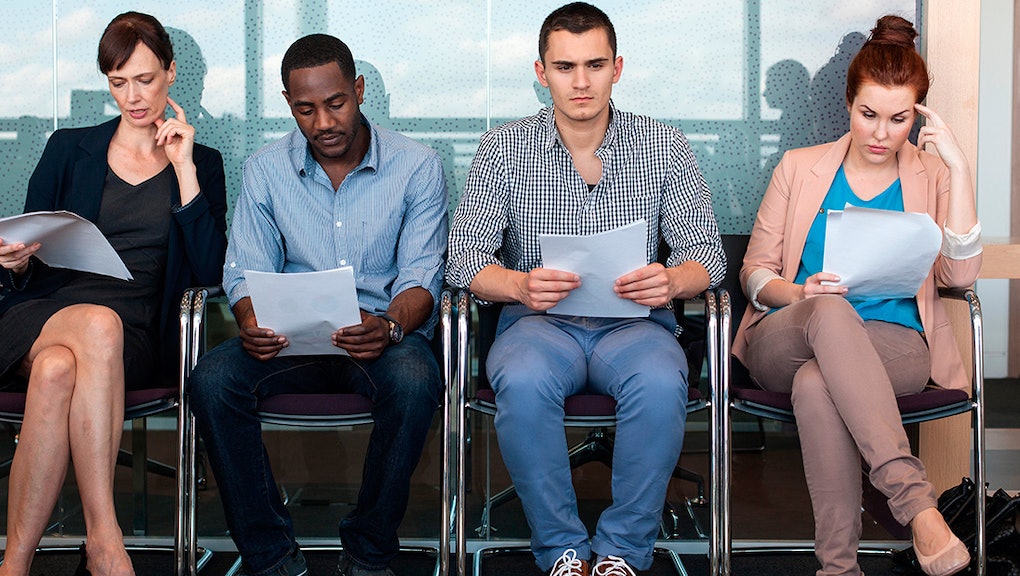 The Biggest Reasons Young People Do — Or Don't — Get Hired

The news: America's best companies would love to start hiring Millennials — if only they weren't such selfie-taking narcissists.

That's what a recent study performed by Millennial Branding, a Generation Y-centric consulting firm, and Elance-oDesk, a large online workplace for freelancers, concluded. They polled 200 company owners and human resource managers and asked them what attributes Millennials were most likely to possess.

However, Dan Schawbel of Millennial Branding, co-author of the study, says this statistic isn't too troubling.

"Some of it has to do with the generation that's grown up with the selfie," Bisharat said to Mic. "But I also do think that this is a generation that's grown up in a different world, where business is moving faster than ever, technology underpinnings and advantages are key for the success of business, the need for on-demand talent and constantly honing your skills are changing, so this generation is having to reinvent the way people work to be successful. In the process of doing that, if they have to think about themselves as they're saddled with debt, I can't blame them."

So why do Millennials get hired? The Washington Post recently noted that Millennials are still having difficulty getting jobs despite a gradually improving economy. Even though the Class of 2014 entered one of the healthiest job markets for recent college graduates in years, the youth unemployment rate in the United States is still hovering above 12%, near the same level it was at the peak of the Great Recession. Despite their efforts, recent college grads just can't seem to catch a break.

According to the study, Millennials need to focus on hard skills. More than half of hiring managers want hard skills from their Millennial hires, and 45% expected to focus even more on skills in the future.

"I think this is a shift," Bisharat said about the change in priorities away from a fit with the company's culture. "But the big gap they're seeing is in technical skills. There's a huge shortage of technical skills out there that we are hearing from hiring managers. At the same time Millennials, and 8/10 hiring managers believe this too, are a native digital generation so [they have] very concrete, specific skills."

The Millennial predilection toward freelancing will inevitably play a part in their employment endeavors in the future. The study polled just over 1,000 Gen Yers and found the freelance life appealed to 79% of them. In a "1099 economy" that's increasingly making freelancers out of full-timers, the genuine desire to freelance is a blessing.

You can't get a job in American society simply by going to college anymore. You need a degree and bankable skills on which to make a living. Learning Adobe Photoshop, JavaScript or C++ (and other languages) is just as important as a bachelor's degree in 2014.

And as far as interviews go, be humble, but not too humble. Fewer than half of hiring managers thought Millennials were confident. So you need to be sure of your abilities, but not to the point where you come off as pompous or cocky. Something as simple as a quick Google search will show you there's a huge perception out there that Millennials are narcissistic. And remember that Time magazine cover decrying Millennials as the "ME ME ME Generation?"

In fact, the opposite is true. Millennials often donate to charity and do a high amount of volunteer work. Furthermore, a study from earlier in 2014 found Millennials are actually less likely to be narcissistic later in their lives due to the economic circumstances they entered the workforce in.

So find a way to convey that, and maybe play up any experience you've had working on teams (or if you haven't had any, say you like working on teams) since so many HR people value an ability to be a team player.

In short, if you want a job, put down the smartphone, download some tutorials on any number of fields, rehearse job interview questions in the mirror and prepare to fill out enough 1099 forms to last a lifetime.