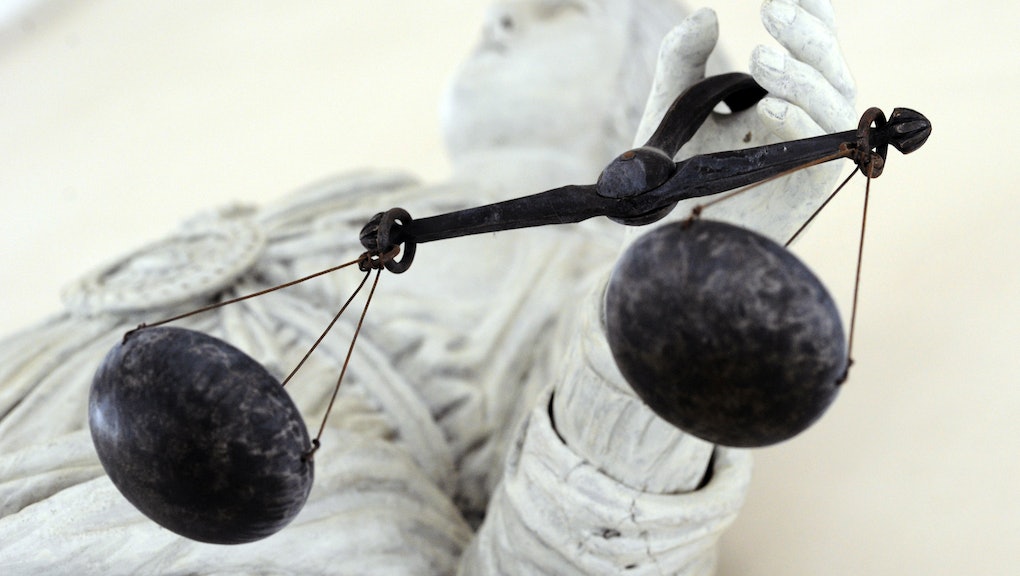 Science Explains Why True "Justice" Is Actually a Myth

The news: Justice, it seems, is in the eye of the beholder.

According to a recent study from New York University, people are "more likely to punish wrongdoing as a third party to a nonviolent offense than when [they're] victimized by it." In other words, our definition of justice depends entirely on whether we're the victim of a crime, a fact that poses problems for the idea of a truly objective or just legal system.

To put it plainly: When we're wronged, we want to be compensated for it more than we want to punish the person who wronged us. However, when we witness someone wronging someone else, we're psychologically predisposed to punish the wrongdoer rather than compensate the victim.

The results don't jell with our legal system, which can have a stifling selection of options to deal with certain crimes or offenses. In certain cases, no matter how much judges and lawmakers attempt to right a wrong, we may never feel truly satisfied.

"In our legal system, individuals are presented with the option to punish the transgressor or not," Oriel Feldmanhall, the study's lead author, said in a news release. "But such a narrow choice set may fail to capture alternative preferences for restoring justice. In this study we show that victims actually prefer other forms of justice restoration, such as compensation to the victim, rather than punishment of the transgressor."

According to the study's co-author, Jay Van Bavel, this ultimately means juries are "[making] decisions on justice that are at odds with the wishes of victims."

How'd the study work? It's fairly convoluted, but here's a rundown:

Things changed when researchers added a third player to the mix. When the third player watched an unfair exchange of money, they were more likely to punish the offending player than compensate the victimized one.

The study concluded that "people show little desire to punish the transgressor when directly affected, however, when deciding to restore justice on behalf of another people become highly punitive, applying the harshest form of punishment."

The takeaway: Justice is subjective, not just in terms of what we define as "wrong" or "right," but also how we determine what constitutes an appropriate punishment.

The U.S. justice system is full of problems. One-quarter of the world's prison population lives in the United States. Perhaps if we use this study's findings to tailor our legal system to help victims rather than (in some cases unfairly) punish perpetrators, we can erase that horrifying statistic and create a system that truly is just.