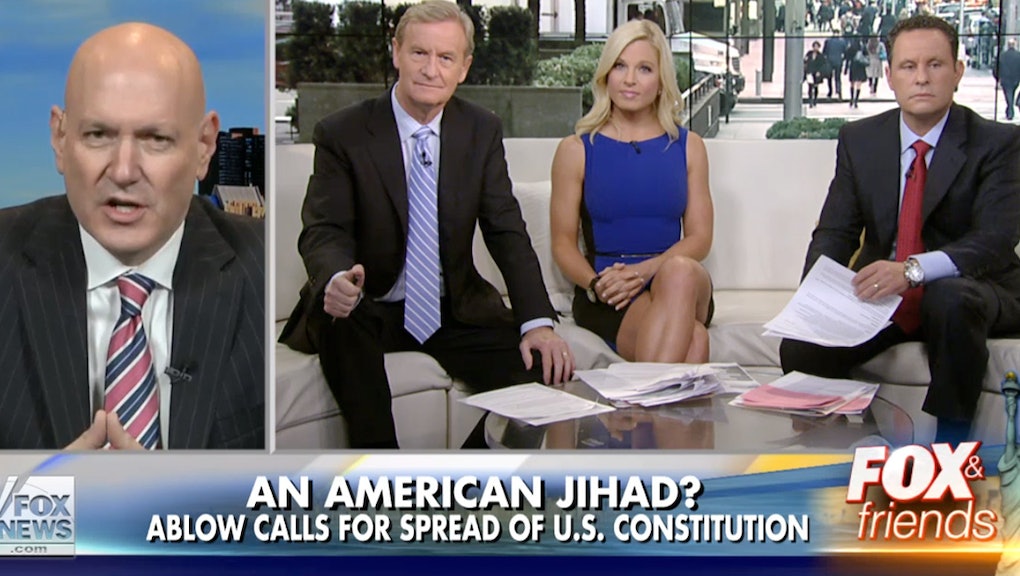 A certain group of people has a "God-given right" to declare "jihad" send soldiers into other countries to wage a "struggle against unbelievers." But who?

If you guessed the Islamic State, you're way off. Try Fox News.

Contributor Keith Ablow called for an "American jihad," in a column posted Tuesday. "An American jihad would embrace the correct belief that if every nation on earth were governed by freely elected leaders and by our Constitution, the world would be a far better place," he wrote. "And an American jihad would not only hope for this outcome, but work toward it."

He also reiterated his point during a Wednesday morning appearance on Fox & Friends.

If it were up to Ablow, the U.S. would take an active role in spreading its greatness, from peaceful solutions like sending retired lawmakers "to seek dual citizenship in other nations, like France and Italy and Sweden and Argentina and Brazil and Germany" to putting boots on the ground "where human rights are being denigrated and horrors are unfolding."

"Because wherever leaders and movements appear that seek to trample upon the human spirit, we have a God-given right to intervene — because we have been to the mountaintop of freedom, and we have seen the Promised Land spanning the globe," Ablow writes, seemingly unaware of how that might be interpreted and not at all aware of how crazy that sounds.

Change begins at home, of course, so Ablow recommends getting rid of President Obama's "psychological plague" and teaching children "to internalize and project their justifiable feelings of pride in our democracy as superior to all other forms of government." Also we would teach in elementary schools that America was "preordained by our commitment to the truth about the essential nature of man," which will totally make sense to a bunch of third-graders.

Other recommendations: Fox News is no stranger to, let's say, unorthodox ideas for dealing with American foreign policy.

Bill O'Reilly announced his plan to deal with the Islamic State, which involved creating an "anti-terror mercenary force paid for by coalition nations" that could be deployed around the world. In September, Duck Dynasty patriarch Phil Robertson showed up on Fox News with his own IS containment plan: "Convert them or kill them. One or the other."

Ablow's screed is even stranger, though. It's almost North Korea-esque in its confidence in America's divine right to spread its will throughout the world and declaration that children should be taught about how glorious the country is. He even sneaks a mercenary force in there for good measure.

It's not just crazy, it's the kind of stuff that terrorist groups like IS accuse the U.S. of doing in their propaganda. Yet he must have heard that and thought, yeah, that sounds about right.