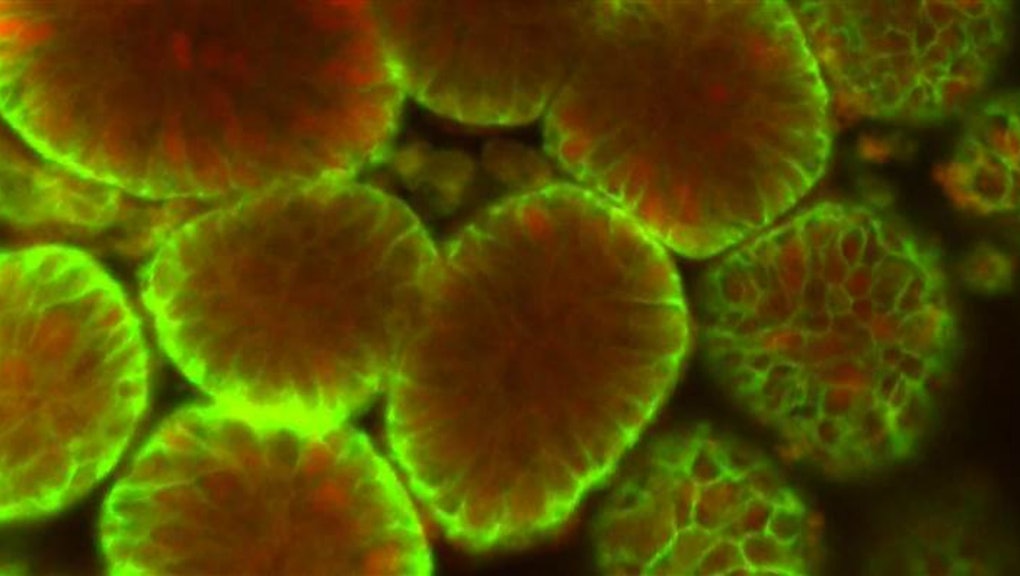 The news: Plagued by peptic ulcers? Relief may be on the way.

Scientists have successfully created human "mini-stomachs" about 3 milimeters in diameter using human pluripotent stem cells. Their research, published Wednesday in the journal Nature, documents the creation of some of the world's most advanced stem cell-derived organs — and while they won't end up inside patients anytime soon, doctors may be able to use them to study diseases like stomach cancer or peptic ulcers.

The researchers grew these mini-stomachs over the course of a month using embryonic stem cells taken from adult volunteers, resulting in a small organ containing eight different cell types. The team was only successful in forcing the stem cells to grow into the lower end of the stomach called the "antrum," meaning full fabrication of the entire stomach is still some time away.

Still, study co-author James Wells told the Verge that it's "more like a mini-organ than anything else that's ever come before."

Growing tissue in petri dishes holds the potential to be much more useful into investigating the causes of various ailments than human observation because researchers are able to control and study the conditions under which illnesses develop. Naturally grown human stomachs in particular are difficult to study. The researchers said they had already identified some immediate applications for the new organoids:

The new technique might one day help them identify the genes and cell signaling patterns that allow bacteria like Helicobacter pylori — the primary cause of peptic ulcer disease — to wreak havoc in our gastrointestinal tracts. The gastric tissues could also enhance the way pharmaceutical companies test the drugs that treat infections ... since stomach cancer is the second leading cause of cancer-related deaths, investigating how these sorts of cancer precursors develop might one day help extend patients' lives.

According to NBC News, this could save a lot of lives:

Helicobacter pylori causes many, if not most, cases of stomach cancer, which affects more than 22,000 Americans a year and kills half of them. Stomach cancer is a major killer globally, affecting close to a million people a year and killing more than 70 percent of them.

Other uses include the possibility that doctors could one day graft cells from the mini-stomachs onto genuine ones, repairing, for example damage, done by ulcers or other ailments.

Why you should care: Stem cell science is rapidly taking off. Recently, Harvard scientists were able to convert human cells into pancreatic beta cells capable of growing insulin, advancing rapidly toward an effective treatment for Type I diabetes.

All of a sudden, that Bush administration ban on embryonic stem cell research looks even worse in retrospect.