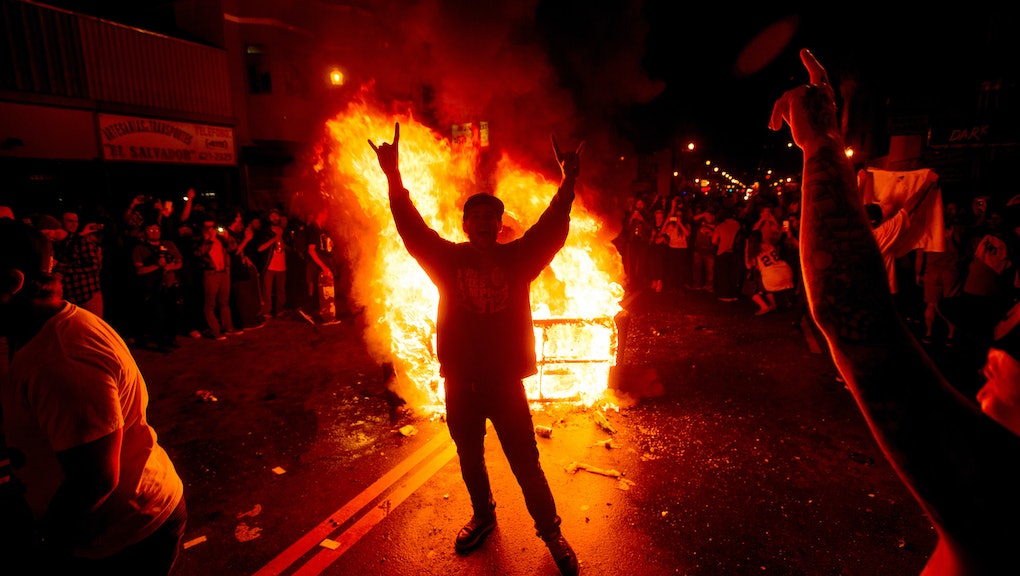 5 Cities that Rioted After Championship Games

Believe it or not, the riots that took place Wednesday on the streets of San Francisco after Game 7 of the World Series didn't go down because the Giants had just lost to the Kansas City Royals.

In fact, the Giants won their third World Series in five years in very exciting fashion with the tying run stranded 90 feet away.

Regardless of whether their team wins or loses, historically there is something that has attracted fans to get rowdy and light stuff on fire after championship games. NPR listed various reasons suggesting why people are compelled to riot, including alcohol, police presence and sports culture in general.

Here are five scenes from notable riots after other championship sporting events:

Some San Franciscans decided to light a couch on fire in the middle of the street, while this man took it upon himself to jump over it. The riots resulted in a number of injuries and arrests.

One of the most iconic moments of 2011 was snapped in Vancouver, British Columbia. The Vancouver Canucks lost the 2011 Stanley Cup to the Boston Bruins, and the city went into full riot mode. The unrest led to nearly $5 million in damage to businesses around the city.

Boston Red Sox fans had to wait 86 years between World Series titles, so naturally they took that bottled-up emotion and rioted after Boston swept the St. Louis Cardinals in the 2004 World Series. As a result, 37 people were arrested as a result.

Less than a week before that, a 21-year-old student was accidentally killed by a police projectile fired to disperse a crowd celebrating a Red Sox victory over the New York Yankees.

After the Chicago Bulls defeated the Portland Trailblazers in the 1992 NBA Finals, Chicagoans took to the streets and celebrated. The ensuing riots resulted in more than 1,000 arrests and $10 million in damages.

With the majority of these riots coming after championship wins, victorious fans in future cities might want to reconsider the ways they celebrate.