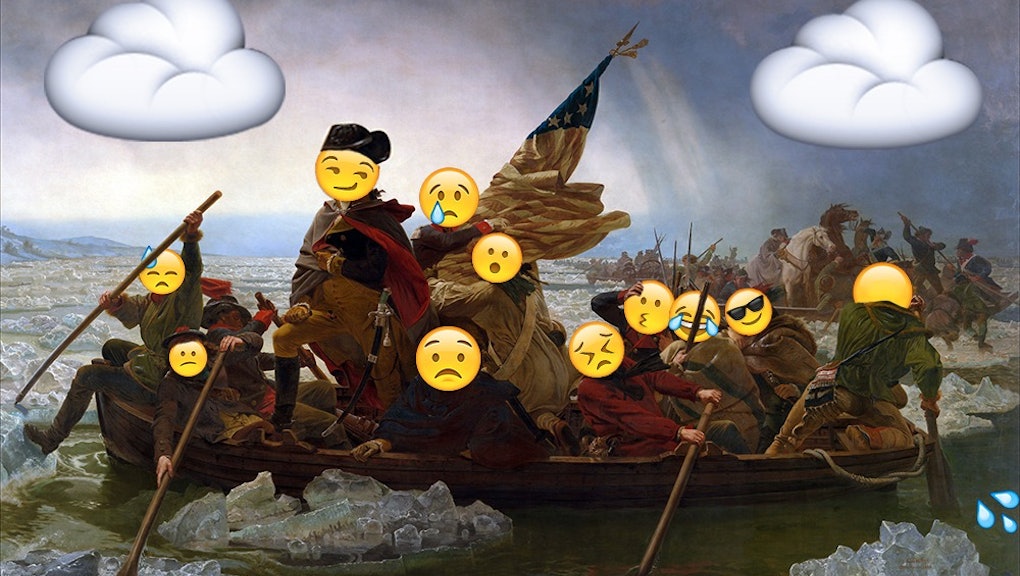 12 Tumblrs That Put a Hilarious Pop Culture Spin on History

To some people, history is a hoot in itself. For others, it's the stuff of crusty textbooks, magazine archives and dinners with grandparents.

Luckily, if history never excited you before, the Internet is here to help. Technology is changing the way we think — and for the better. While online courses might be the most obvious way the Internet is transforming learning, it also offers some much-needed comic relief.

As ridiculous as the Web can be, it also contains some educational gems. Whether you're a history buff or a hater, herein lies proof that some people on the Internet get history, and they get how to make it enjoyable:

The history: iconic pieces of art

As if the canvases that line museum walls weren't damn cool enough, Fly Art has made the modern music-lover completely fall for all kinds of artwork. Kayne West may be a piece of work, but his lyrics transposed onto famous pieces is art.

This Tumblr might be comparing Lorde to more black celebrities than black people in ancient history, but putting her alongside Ancient Egypt's Queen Nefertiti is slayage. While the general motive of the blog could be seen as mean-spirited, the ridiculousness of this specific side-by-side is priceless.

The history: all of it

The pop culture: the princess of pop herself, Britney Spears

There's no better written fiction than the likes of "On Feb. 19, 2006, Britney Spears met Steve Jobs on MySpace and befriended him based on a shared love for science fiction." Britney Inventions lives and breathes this ludicrous idea that Spears is responsible for key creations in history, such as Apple computers and kung fu.

The history: places with incomplete representation of genders

The pop culture: institutions that love to post rosters of their non-diverse members

Ugh, men suck. This Tumblr will remind you of that.

The history: Hillary Clinton being in the spotlight for politics

The pop culture: Clinton being a badass and SMS

In recent years, Clinton has become a media goldmine. There's major speculation as to whether or not she's going to run for president in the next election or what exactly her political game plan is. But one thing is for certain: This Tumblr hit comedy gold with the former secretary of state.

The history: the Queen of England and the pope

Similar to the Lorde Tumblr, this project showcases a surprisingly hefty number of comparisons between Brandy and other celebrities. But also common are outfit-stealers Queen Elizabeth II and Pope Francis, whose repeated transgressions against the celeb must be recorded.

The history: famous figures who got shit done

The pop culture: our thirst for hot people

One of the best ways to make studying and learning easier is adding in attractive people. Think someone is hot? You probably know as much about them as possible, because the thirst is for more than just their good looks. Same goes for this Tumblr.

LOL My Thesis takes more than just history submissions, but the ones in this specific realm of academia are particularly killer, as time-consuming scholarship becomes a tweetable fact about the world.

The history aspect of this Tumblr isn't too informative, but hey, Kim Jong Il was a dictator everyone should know about. What better way to familiarize yourself with him than through his remixes?

The pop culture: the ever-so-useful emoji

The history: masterpieces of art

If the sheer brilliance of Beyoncé was not enough, here her lyrics harmonize with the stuff of art history textbooks. If only she could also offer tutoring sessions on Impressionism.

The history: Founding Fathers of the United States

OMG can u believe that George Washington was wearing a wig to that party?! Although the best gossip is probably stuff you haven't heard yet, these factual rumors from history will surely pique your interest.

The best part about most of these Tumblrs is that the history is real. The creative corners of the Internet are helping teach history — let's embrace it (and reblog it).