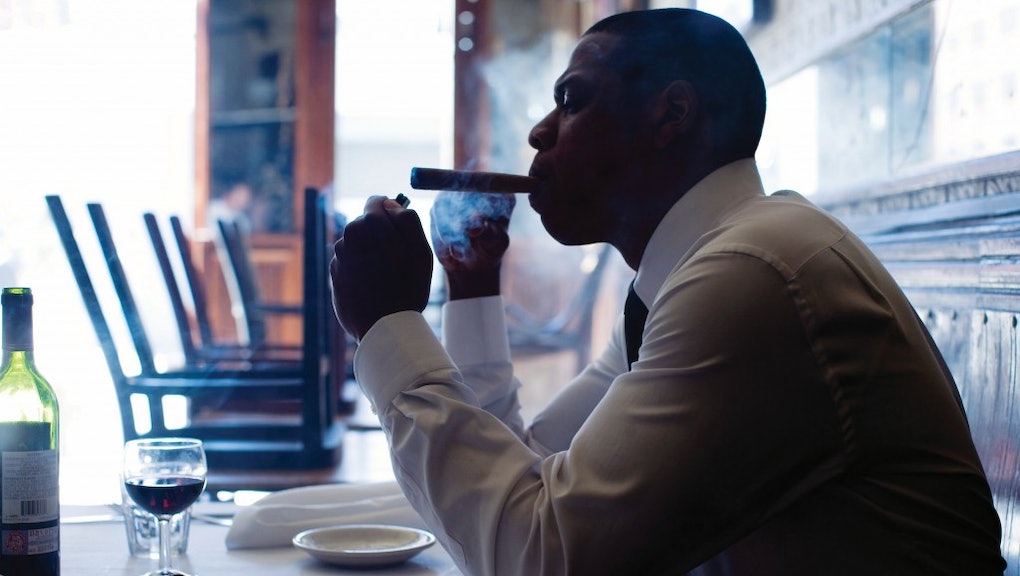 Nowadays, it seems every CEO fancies him or herself a friend of rappers.

For example, Ben Horowitz, founder of Andreessen Horowitz venture capital firm, begins each chapter of his latest book The Hard Thing About Hard Things: Building a Business When There Are No Easy Answers with a quote from one of rap's legends. Chapter 1, entitled "From Communist to Venture Capitalist," begins with a lyric from DMX's "Who We Be" before launching into a story about barbecuing with his friends in his mansion. Classic hip-hop.

He isn't the only one, though. Reddit co-founder Alexis Ohanian shared his admiration for Jay Z and Biggie Smalls while discussing his entrepreneurial strategies at a Phat Start-up event, which is regularly held in New York City to provide networking resources for entrepreneurs who seek to apply hip-hop's hustler mentality to the business world.

And of course the annual Forbes Hip-Hop Cash Kings list is a prime example of how we all basically think of hip-hop as financial culture. It's continually one of the magazine's most read features of the year, celebrating the net worth of hip-hop moguls who make luxury sound so good.

But, if this trend cheapens anything, it's hip-hop. Hip-hop is about so much more than the bottom line. Its stories discuss identity, morality, love, spiritual trials and the struggle to save and inspire communities. Hip-hop is booming and the U.S. economy is not. Maybe the financial moguls of today should look more closely at the advice of the men they claim to admire. If they did, they might break the cycle of destructive decision-making that led us into our current recession and start working to build the sustainable economy we desperately need.

Corporate executives with AIG and Merrill Lynch drew harsh criticism when they spent their bailout money on executive bonuses and related lavish expenditures rather than getting their businesses back in order. These seemingly illogical patterns added unnecessary hostility to conversations about the future of capitalism. Our country's 1% should look to get back to the basics as Kendrick Lamar suggests, if they want to avoid all out class warfare.

2. Avoid relying too heavily on credit and loans.

Biggie was dealing with a very different clientele than most of America's corporate elite, but what he preaches holds true for a much wider market: Building a business based on credit is a path to financial ruin. Markets can be just as erratic as crack addicts. Wildly optimistic loan speculation and over-reliance on our credit system created our most recent housing bubble, which jumpstarted the Great Recession when it burst. I'm looking at you, $1.2 trillion student loan debt.

Cutting corners on quality can boost profits — up to a point. A company that develops a reputation for being lax on safety standards and quality control will watch its brand become an object of mockery. The stigmas can be difficult to shake. The solution is simple — don't cut corners.

4. Your employees are more important than the bottom line.

There's this absurd idea that turning a profit and paying employees livable wages are mutually exclusive business strategies. This is absolutely false. Wage increases improve company morale, decrease employee turnover, increase productivity and quality of products and services. Organizations that make an explicit point of paying their employees salaries they can be proud of — Trader Joe's, Costco, QuikTrip, the state of Washington — are doing very well for the most part. America's executives should look to with their people to succeed, as Jay Z suggests, not against them.

Businesses need to be able to tolerate change. There are innumerable examples throughout history of companies that could not or refused to adapt to changing times. They got bopped. There are even more examples nowadays of corporations actively trying to stand in the way of innovation, most notably in the energy sector. These corporations resist innovation not only to their own detriment but the detriment of all. Just ask Bun B. Those individuals (corporations and people) that can adapt and create change are the ones that will be making the most change in the long run.

6. Create a moral direction for your business.

Ethical considerations have ridden in businesses' sidecar for years, like Robin in his short shorts. But if the last few decades or so have proven anything, it has proved that businesses that maintain a strong ethical component tend to do better than those that don't.

If we want create a more stable economy, the businesses that make it up should look to make their company practices more sustainable. Because business won't get better until businesses get better, like the mighty Mos said.

As the above list has illustrated in part, rappers and CEOs do actually face similar challenges. But they differ in one important respect: The best rappers have all had a firm understanding that, once they make it, they need to work give back and create favorable conditions for the generation that's still coming up. They create opportunity, they outline new cultural directions, and they inspire as a way to break negative cycles. The higher moral and aspirational goals present in all of hip-hop's greatest verses are what has given real mystique and body to the artform.

Business doesn't always have the same ideal. Hip-hop, then, is a more apt case study for businessmen than they realize. It's a music modeling how emotional beings should relate to and interact with impersonal economic forces. Executives admiring the art form need to see that it's about more than straight dollars and cents — it's dollars and sense.