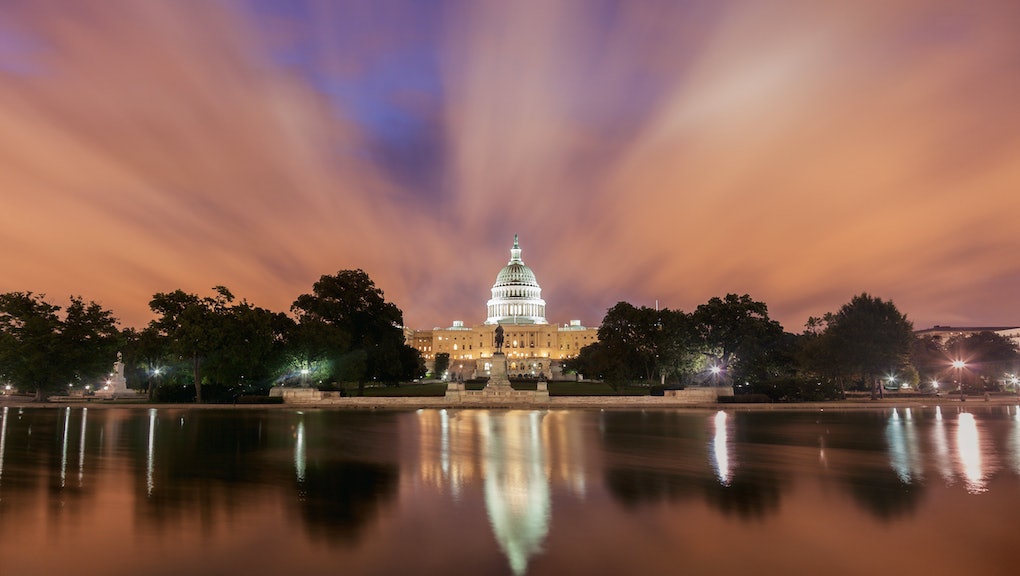 The grand narrative of the midterm elections is that there is no grand narrative. No ominous specter, like the Iraq War or a dreadful unemployment rate, hangs over either party and neatly seals its fate. Furthermore, the public has little reason to believe things will change dramatically: Republicans will almost certainly continue to hold the reins in the House of Representatives, and the expectation that they will finally seize control of the Senate won't render Washington more ideologically conservative than the House has already made it.

But the midterms matter a great deal in a number of ways. They don't offer high drama as far as the horserace is concerned, but there are many big issues with high stakes that inform both the process and the outcome of the election. Here's what you need to pay attention to, in eight numbers:

83%: The chance that Republicans will take control of the Senate

Just one day before the election, many races are far too close to call, and the confident rhetoric coming out of both parties' headquarters is in and of itself a campaign tactic for mobilizing more voters. But in the aggregate, the Republicans are in better shape than the Democrats — the latest projections from Bing indicate there's an 82% chance that the GOP will take control of the Senate.

53%: The percentage of young Americans who would be willing to recall and replace all members of Congress

Harvard's Institute of Politics (IOP) poll released last week shows that millennial voters are dissatisfied with Barack Obama and the Democrats, and there's been a swell in enthusiasm for the Republican Party. But all the numbers on disaffection with one party or another pale in comparison to their total disillusionment.

Fifty-three percent of young Americans would be willing to recall and replace all members of Congress, and this figure rises nearly 10 points among "likely" voters. A survey published by IOP earlier in the year indicated that only 14% of young people believe Congress does the right thing most of the time. Turnout for young people is going to be low on Tuesday, but disillusionment is a better way to characterize it than apathy. Check out Mic's analysis on low youth engagement here.

$4 billion: The record amount projected to be spent on this year's elections

The Center for Responsive Politics estimates that this year's midterm elections will the most expensive ever, with spending from candidates and outside groups totaling close to $4 billion. Perhaps even more troubling is that this election also has more "dark money" — money from political nonprofit organizations that can spend on races without disclosing their donors — than in any other set of congressional races before it.

This money, so much of it spent by corporate interests buying favor through shadowy mediating organizations, could be better spent elsewhere. How about pre-kindergarten for 1.5 million 4-year-olds? Or body cameras for the half-million police officers employed across the nation as it tries to reform its culture of brutality toward minorities? Check out Mic's guide to more productive ways to spend money on America here, or an explanation of the dark money phenomenon here.

22: The number of states with new voting restrictions since the 2010 elections

The Republicans' war on voting could very well swing the election results this year. Their nationwide campaign to create obstacles to voting — whether through shortening early voting, blocking initiatives to make same-day registration simpler or outrageously stringent voter ID requirements — is going to decrease turnout for key Democratic constituencies, including minorities and young people.

The correlation between race and voter restrictions is striking. In the 11 states with the highest black turnout in 2008, seven have new restrictions; in the 12 states with the largest Hispanic population growth between 2000 and 2010, nine passed laws making it harder to vote. Check out our full guide to the new voting restrictions here.

4: The number of states and the District of Columbia voting on marijuana legalization

When citizens enter the voting booth on Tuesday, they will have the opportunity to vote on ballot initiatives on all kinds of different state-specific issues. The passage of these initiatives often allows states to act as laboratories that tests out policies too divisive to be executed on a national level, and the most interesting ones are on weed and wages.

Oregon, Alaska and Washington, D.C., will have a vote on recreational marijuana legalization, and Florida will be the first state in the South to consider medical marijuana. Whether you're a pot enthusiast or a critic of the war on drugs, drug policy observers consider the potential passage of these initiatives a crucial step in what many consider to be a tipping point for the marijuana legalization movement, which is, in many ways, poised to be the next gay marriage. To learn more about the issue, read our guide on the initiatives here.

4: States with minimum wage increases on the ballot

Alaska, Arkansas, Nebraska and South Dakota all have minimum wage hikes on the ballot. All of the states have a conservative voter population and polling shows that all of them are likely to pass initiatives that will raise the minimum wage and improve lives for millions in coming years.

Raising the minimum wage has become a hot topic. Democrats have buckled down on the issue this year, while Obama called for a raise on the federal level during this year's State of the Union address, and fast-food workers have been protesting with great energy across the country. National polling shows that a majority of Americans support raising minimum wage. To learn more about the issue, read our guide here.

$4 million: How much the National Rifle Association has spent against a gun-loving Democrat, just to send a message.

Democratic incumbent Sen. Kay Hagan is not a gun-control zealot. Mother Jones has described her as being "a strong supporter of gun rights, having voted against bans on assault-style weapons and high-capacity magazines." Yet the NRA has dropped $4 million against her in what may be the most-watched Senate race in the country. Hagan dared to vote for the watered-down post-Sandy Hook background check expansion bill, which never even passed, and so the NRA has decided she should be dispensed with.

But advocates of gun control should be optimistic overall. Despite the NRA's clout, more states have strengthened their gun control laws than weakened them, and they increasingly have big dogs like billionaire and former New York Mayor Michael Bloomberg on their side in the fight. Read more about guns and the midterms in our guide here.

9: The number of federal circuit courts in which Democratic appointees now hold a majority

Since Obama has taken office, he has dramatically altered the partisan and demographic composition of the federal courts. "When Obama took office, Republican appointees controlled 10 of the 13 circuit courts of appeals; Democratic appointees now constitute a majority in nine circuits," notes the New Yorker. If Republicans gain control of the Senate, further progress will likely be be blocked, as will Obama's careful attention to selecting minority and women judges. Despite the fact that they don't consistently attract media attention, the courts could very well determine what the remainder of Obama's second term looks like. Read Mic's full analysis of the potentially dire consequences of a GOP-controlled Senate here.

As you can see, this election may be a lot of things, but it's not inconsequential. Get to a voting booth Tuesday and make your voice heard.