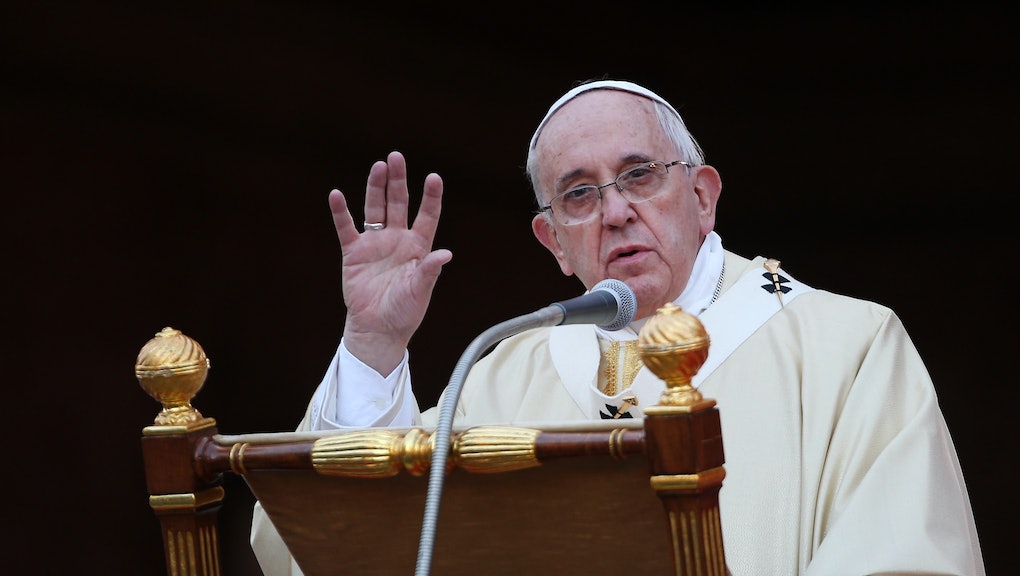 The news: Pope Francis defended himself this week against critics who tried to paint his progressive attitude toward the poor as a form of communism.

"The fact that the love for the poor is in the center of the gospel is misunderstood," the Pope said in a speech at the World Meeting of Popular Movements — a group comprised of farmers, workers and trade unions, reports Newsweek.

"Land, housing and work are increasingly unavailable to the majority of the world's population," Francis said. "If I talk about this, some will think that the Pope is a communist."

And he was right. Earlier this year, Rush Limbaugh derided the Pope's altruistic stance toward the poor as "Marxism" and "socialism" rather than charity. But the pontiff's words upset more than just conservative demagogues; American Christians are upset with Francis' actions as well.

On Sunday, one American cardinal at the Vatican told USA Today that the Roman Catholic Church was "a ship without a rudder" thanks to Pope Francis. The cardinal joked everyone was "feeling a bit seasick."

But Pope Francis has remained steadfast in his commitment. The world needs to "keep up the fight" for the disenfranchised, the Pope said. "Let's say together with our heart: no family without a roof, no peasant farmer without land, no worker without rights, no person without dignified labor."

The Pope's latest words are just the latest in a string of progressive commentary he's made in recent weeks. Last week, Pope Francis stated his belief in evolution and the Big Bang Theory. And earlier in October, he doubled down on including gays in the church despite a bureaucratic setback, saying, "God is not afraid of new things."

The takeaway: Pope Francis is right to be alarmed; the average worker would have to work 354 years to make what the average CEO makes in one year. Under such economic circumstances, it's refreshing to see the Church take such a bold stance, even if it attracts negative attention from some pundits.