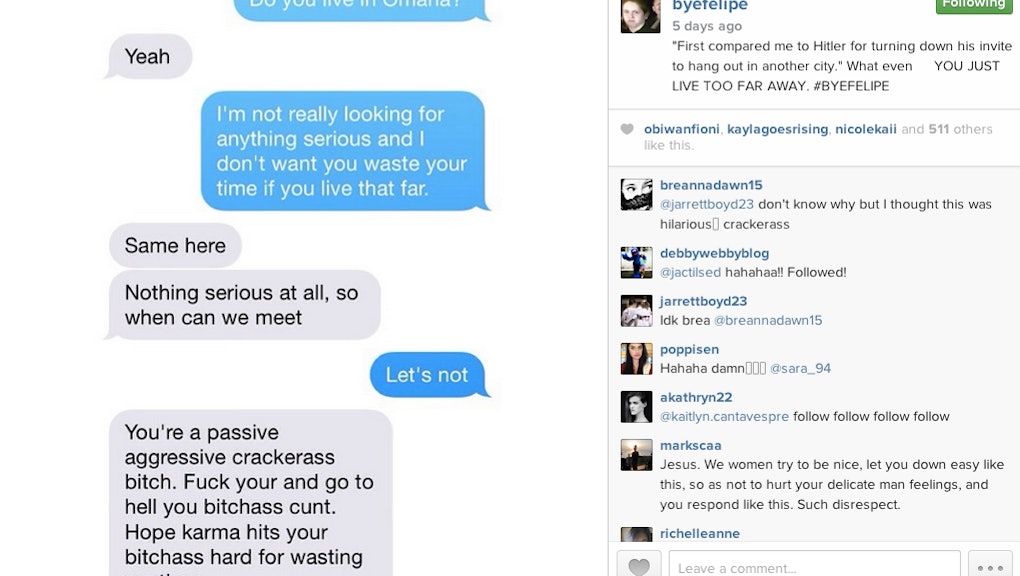 The creepy underworld of online dating had yet more unforgiving light shined upon it last week with the brilliant Instagram account Bye Felipe.

Woman, in response to a man's request to meet up: "Let's not."

The messed-up texting interactions showcased on Bye Felipe have struck a chord with women across the Internet, not the least because, as BuzzFeed summed up, the jarring screenshots reveal "the shocking truth about being a woman online."

But as Tweten pointed out in a blog post on Friday, the disturbingly combative texts also reflect a bigger truth about women's treatment offline, in the "real world."

As Tweten wrote on Ms:

After seeing these disturbing messages grouped together, it's easy to come to the conclusion that our society has a misogyny problem. The same forces that taught Elliot Rodger that he was justified in murdering women for rejecting him, the cultural atmosphere that says it's OK for hundreds of men to catcall any woman a public space, the thing that drives men to brutally injure women who ignore them are all connected to the sense of toxic entitlement some men possess.

The frightening entitlement demonstrated by the angry men of Bye Felipe is the same entitlement of those catcalling men who demand that female passers-by smile at their unsolicited compliments or assume that a woman's presence on the sidewalk in a short dress is an open invitation for praise.

It's the same entitlement that's driven misogynistic gamers of GamerGate to threaten women like Anita Sarkeesian and Felicia Day for daring to criticize the video game industry's treatment of women. It's the same entitlement, as Tweten said, that led Elliot Rodger to think that his repeated rejection by women was justification for a killing spree.

And it comes from the same sentiment at the root of so many domestic abuse cases, in which the man takes out his anger on a woman simply because he's the one "in charge."

The harsh irony is that, in theory, online dating could create a safer space for women to encounter men on an even playing field, allowing them to screen unsolicited advances and interact with the opposite sex on their own terms. But as evidenced time and again, most recently by Bye Felipe, online dating also draws out the worst kinds of misogynistic behavior, exposing men's abusive treatment of women in one unmistakable screenshot after another.

"The messages featured on Bye Felipe are like an immortalized version of the catcalls and threats women receive on the the street every day, just walking around and existing," Tweten explained on Ms. "Until we change the cultural atmosphere, women will continue to receive these hurtful messages online and in real life."