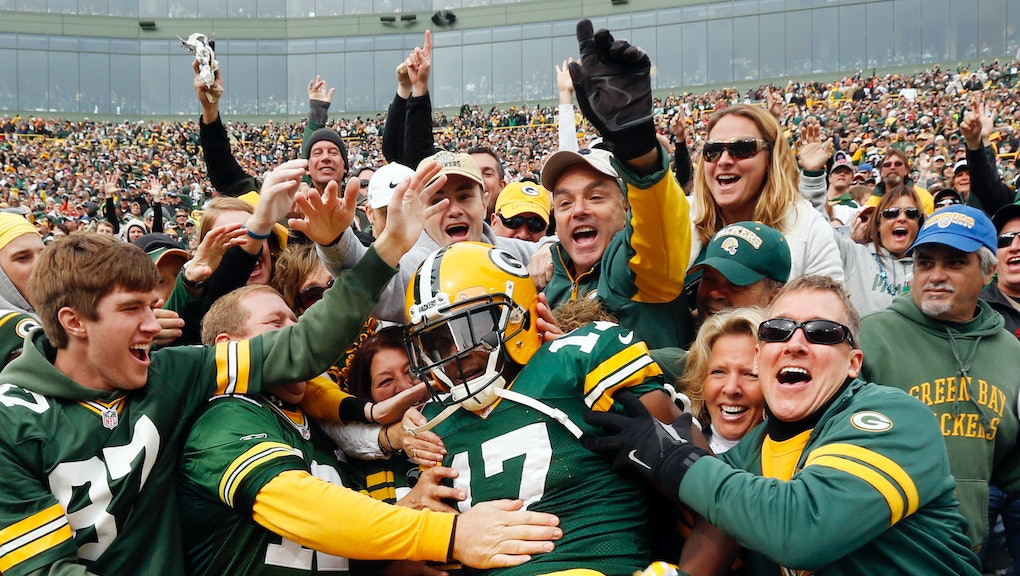 Scientific Evidence You're in a Romantic Relationship with Your Sports Team

You are in a serious, longstanding relationship, and admit it: You're a hopeless romantic. Even though you are bound to be disappointed and heartbroken numerous times throughout the year, something inside you keeps coming back for more.

This is the life of a sports fan.

While people may not consider sports fandom to be very romantic, the pairing of fan and team has more similarities with actual relationships than you might think.

Let's break down the scientific evidence.

You feel a deep emotional bond with your team.

It's well known that the strongest romantic relationships require emotional connection, but who knew the same was true for sports fandom?

Your team plays such a significant part of your day-to-day that you couldn't imagine what your life would be without them. Sports teams become so embedded in people's lives that it begins to feel like a legitimate relationship.

Author Eric Simons laid this out to Smithsonian magazine in unmistakable terms (emphasis ours):

"The way that relationships work, your brain often has trouble distinguishing between you and the other person. In the case of sports, there is compelling evidence that this is basically a real relationship in your brain. In a very real sense, the sports team becomes a part of you. You just feel like whatever success it achieves is a personal success, and whatever failure it has is a personal failure. You can't cut the team off without cutting off a part of yourself. Even if the team is losing, you have so much of yourself wrapped up in it that you can't just walk away. To do so is to give up on a part of yourself."

Your team makes you feel less alone in the world.

A 2007 study from the North American Journal of Psychology reported that identifying with a sports team can lead to "lower levels of loneliness and alienation," not to mention higher self-esteem. And as any recently single person can attest, having a romantic significant other can certainly reduces loneliness.

You feel better physically when you're with your team.

Studies show that both sports identification and romantic identification can both improve psychological and even physical health. As professor Daniel L. Wann told CNN back in 2012, "Sports fans are quite active physically, politically and socially." Wann said later, "The more you can relate or connect to a sport (through action or the athlete), the more likely it will influence you to get moving."

Being in a romantic relationship won't necessarily inspire you to exercise, but studies have shown correlations between loving relationships and multiple positive health outcomes, including reduced pain and lower blood pressure.

Although occasionally, your team sends you into a downward carb spiral.

Seeing your team lose can not only affect your mood — it can also affect your physiology, as well. Studies show that individuals adopted unhealthier eating habits after their teams suffered losses. As researcher Pierre Chandon told Mic, "When our favorite team wins, we feel good, we feel strong and it's easier to make healthier food choices. When our team loses, however, we feel weak, and it becomes more difficult to resist the comfort of indulgent food."

The same can be true for individuals in not-so-happy relationships, as anyone who's ever stared down the bottom of a Ben and Jerry's pint knows.

This emotional connection to a team builds over time.

You are hopelessly loyal to your team...

Like any romantic relationship, there needs to be commitment. You wouldn't ever "cheat" on your team by dipping your toes in the pool of sports infidelity. Would a Dallas Cowboys fan ever be caught dead cheering for the Philadelphia Eagles?

In science terms: If you're a real fan of a certain team, or a part of a certain "ingroup," you wouldn't ever considering changing allegiances and becoming a member of an "outgroup." A Psychology Today report explains:

Is a Red Sox fan fundamentally different from a Yankees fan? Does one bleed red and the other bleed blue? Of course, the answer is "No." Fans of any sort are identical in their passion, their drive, and their devotion. More importantly, they are really no different at all in their basic human qualities. Yet sports rivalries feed on the manufactured distinctions that ingroups and outgroups breed within themselves.

And as anyone in a romantic relationship knows, loyalty is basically everything.

...even when that team changes who it is.

This loyalty holds true even if rooting for a team is essentially "rooting for laundry."

Jerry Seinfeld might have a point. With the "revolving door" that is professional sports, teams change from year to year. Any allegiance that was made over numerous years goes out the window as soon as a player is traded or decides to leave.

But no matter what team changes are made, sports fans stay devoted and don't jump ship (right, Miami Heat fans?). Even if the sports fans are rooting for laundry, that laundry sure has a place in their hearts.

You have endless patience for your team, even when it's driving you crazy.

Romantic love is patient, and the same holds true for being a fan of a sports team. Some sports franchises, like the Chicago Cubs, have gone 106 years without winning a championship. Winning titles is extremely difficult in any sport (there can only be one winner per year, after all) and for certain sports franchises, it feels downright impossible.

Despite the almost guaranteed disappointment and aggravation from championship-deprived teams, fans continue to pack stadiums or arenas every single year hoping that things might turn out differently. Look at Washington's football team: They continue to be mediocre on the field, but they rank near the top of the league in fan attendance.

Most importantly, you trust your team no matter what.

They say trust is the most important aspect of any relationship, and the same is true for fans' connections to their team. That trust plays out when it comes to team owners, who have to be trusted not to relocate your favorite team to another city and especially not overnight. That trust also applies to coaches, who promise to lead their team in the right direction through the season.

And if fans sense that playoffs and championships are not on the horizon? Teams will have a hard time maintaining that trust and risk losing their support.

But if the team keeps your trust, it could be a joyous, lifelong relationship — in other words, until death do you part.

At the end of the day, your team just makes you happy.

It can be as simple as that. As Simons told Smithsonian, "People get significant rewards from sports. It just makes you feel good." Like the best relationship you've ever had.