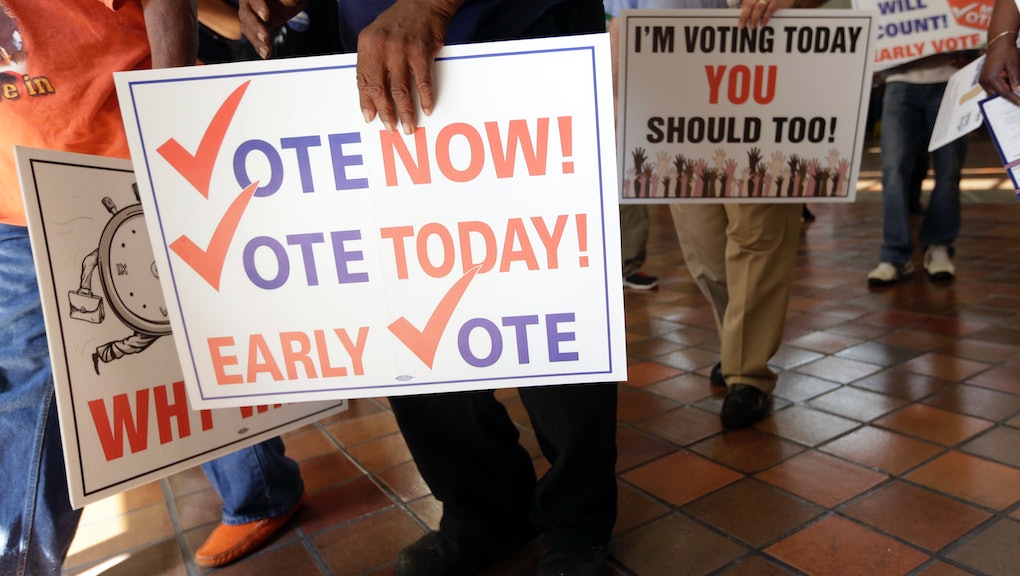 Get Out and Vote! Here's How to Find Your Polling Place on Election Day

Turnout in this year's midterm elections will likely be among the lowest in recent years.

Enthusiasm has been dismal. Americans are unhappy with President Obama and fed up with Congress. Normally dissatisfaction fuels higher numbers at the polls, but there are few pressing national issues at stake that have captured the public's attention.

As a consequence, not many young Americans are following the midterm elections, nor are they planning to vote. A Pew Research Center poll found that only 5% of adults under 30 are closely following the elections. Moreover, a survey by Harvard's Institute of Politics reported that less than 1 in 4 Millennial voters definitely plans to vote on Tuesday.

Where to vote: But it's not too late! You can still make a difference if you get out there and vote. Check out this tool from the Pew Charitable Trust and Google to find your local polling place, because not knowing where to vote isn't an excuse for not voting:

Voting matters: The midterms might not have all the drama of a presidential year, but that doesn't mean they're not extremely important. A lot is at stake tomorrow, especially for young Americans.

If we don't vote, we won't end up with a government that reflects our beliefs and ideas. In fact, sitting on the sidelines contributes to a more partisan and divided Congress, which is one of the driving forces of gridlock and inaction and one of the big reasons we're all so frustrated right now.

The people who are definitely turning out to vote are those who are the most partisan, particularly the most conservatively partisan. There are big differences between the voting and the nonvoting public. Nonvoters tend to be more liberal than voters, and wealthy voters turn out in higher numbers.

So, instead of letting voters make the decisions for you, cast a vote yourself. That's the only way change will happen. Hopefully that's a convincing enough reason to take a look at the tool above and get out to vote on Election Day.