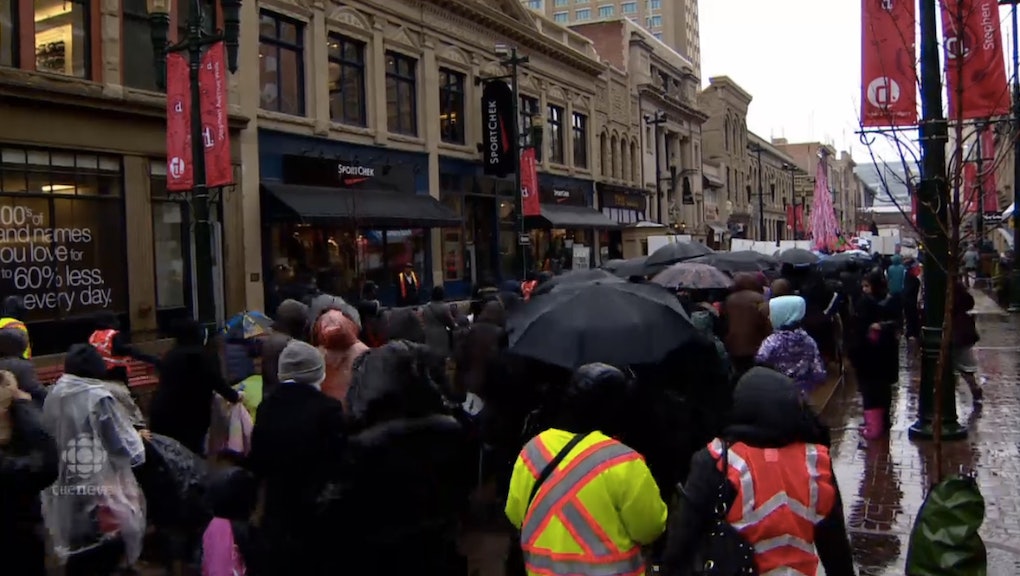 Canadian Muslims March to Show the True Meaning of Islam

The news: This weekend in Calgary, Alberta, hundreds of Muslims came together to condemn the recent shooting by a young Canadian man who police say held extremist Islamic beliefs.

"We are here to build this country together, to make peace and love together," Fatima Albarri, who took part in the march, told CBC. "We are originally from the Middle East, but we are Canadian."

The violence and unsubstantiated links to terrorism have again brought scrutiny against Islam, though not all have responded to the conversation with fear. The mosque in Cold Lake, Alberta, was vandalized in the wake of the shooting. As Mic reported last week, "[t]he words 'Go Home' were spray-painted in red across the walls, and the windows were smashed in. [...] A number of volunteers arrived shortly after the defacement was discovered to clean up the site; they scrubbed the walls, helped replace the glass and displayed signs that said 'Love Your Neighbor.'"

Last week's shooting in Ottawa, which left public officials barricaded inside Parliament and one soldier dead, moved the community in Calgary to take a different tone to protest terrorism. The marchers said they must clarify Islam's tenets of peace.

On Monday, Muslims around the world will also mark the holy day Ashura. The day commemorates the death of the prophet's grandson, Hussain, who was died protesting against tyranny in 680 C.E.

"Islam is a religion of peace," Riyaz Khawaja, the leader of Calgary's Muslim community and head of the Hussaini Association of Calgary, told CBC. "We are here to gather, to stand against terrorism."