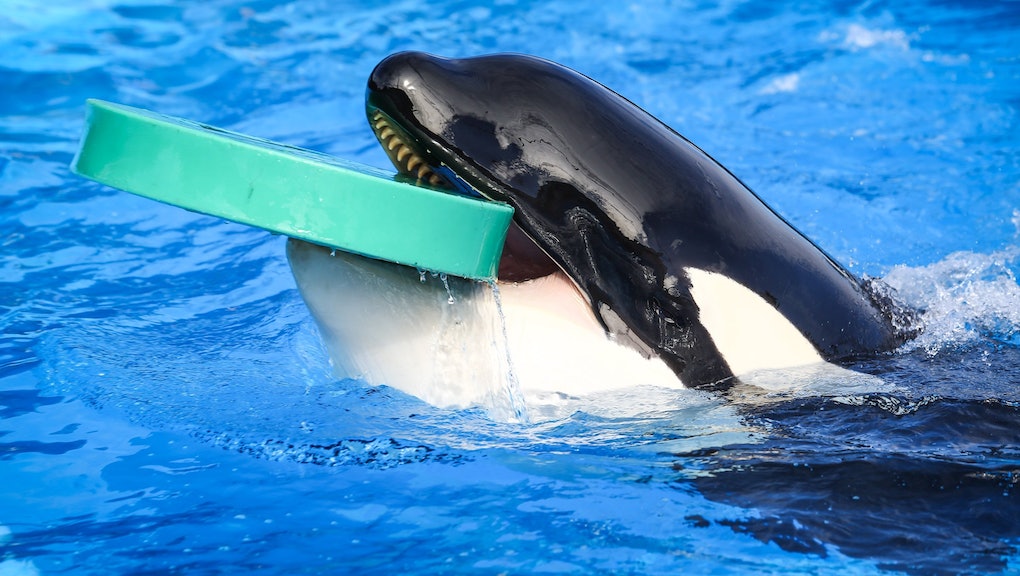 One Year After 'Blackfish', Here's What's Happened to SeaWorld

It's been just over a year since the documentary Blackfish aired on CNN and told the tragic story of Tilikum, an orca captured in 1983 that would later be connected to three deaths, including that of trainer Dawn Brancheau. The film took an unwavering stance against animal captivity.

Blackfish not only depicted the life of Tilikum, but also the 39-year history of killer whale captivity. It received rave reviews and incited a major push against SeaWorld Entertainment, the aquatic theme parks that hold the likes of orcas, dolphins and sea lions.

So, what impact has the documentary had on SeaWorld and the public image of the water parks one year later?

SeaWorld Entertainment announced its second-quarter financial results in August, and the numbers weren't great. Only 6.6 million people visited the park from April to June, a minuscule 0.3% increase from the same period in 2013. And though the company's net income was $37.3 million, it fell far short of the expectations of investors, who sent the company's stock down 33%.

Many believe SeaWorld's portrayal in the Blackfish documentary sparked its fall. But SeaWorld pointed to increased competition, delays in one of its own attractions, a late start to summer for some schools and negative publicity from legislation in California. And even though admissions were up, admission per capita (admissions revenue divided by total attendance) fell 2.5% because of promotions and the mix of visitors, and in-park per capita spending was basically flat.

California state Assemblyman Richard Bloom, a Democrat from Santa Monica, unveiled legislation that would ban the use of orcas in shows. Bloom was inspired to become an advocate for the captured aquatic animals after watching Blackfish. A whopping 1.2 million people signed a petition supporting the bill.

As broken down by the U-T San Diego, the bill has three main goals: "end the use of performing orcas in theme shows, ban captive breeding and prohibit the import and export of the so-called 'killer' whales." But the bill was tabled for the rest of the year, and the earliest it could be voted on is mid-2015 after further study.

After the news of its poor financial performance, SeaWorld revealed plans for the Blue World Project at its San Diego location. The project is an initiative to "build new, first-of-its-kind killer whale environments" along with funding "new programs to protect ocean health and killer whales in the wild."

The Blue World Project is expected to add 10 million gallons of capacity to the park. Projected to open in 2018, it will be the world's largest underwater orca viewing establishment. The Orlando, Florida, and San Antonio, Texas, parks are slated to get upgraded next.

4. Inevitably, SeaWorld still has to defend itself against the haters.

As much as SeaWorld is doing damage control and appearing to change its ways, the masses are still fuming.

4. Video footage of a pregnant orca caught in a gate at SeaWorld San Diego has surfaced.

In the video below, you can see one of the gates close on a killer whale named Kalia, resulting in her being wedged between the gate and a structure in the water. Heads up, it's difficult to stomach. The struggle starts at about the 2:00 mark.

The Dodo has highlighted similar incidents as reported by Cetecean News Network. SeaWorld has responded to the situation, explaining that the gates move slowly and use a small amount of pressure. According to the water parks, "gate play" happens regularly with the whales.

Things have been dark for SeaWorld since Blackfish.  But hopefully the bad publicity from the film has served as a wake-up call for all aquatic theme parks about their treatment of wildlife, as it has for SeaWorld. And even if it hasn't, at least there was enough pushback against SeaWorld to demand change.