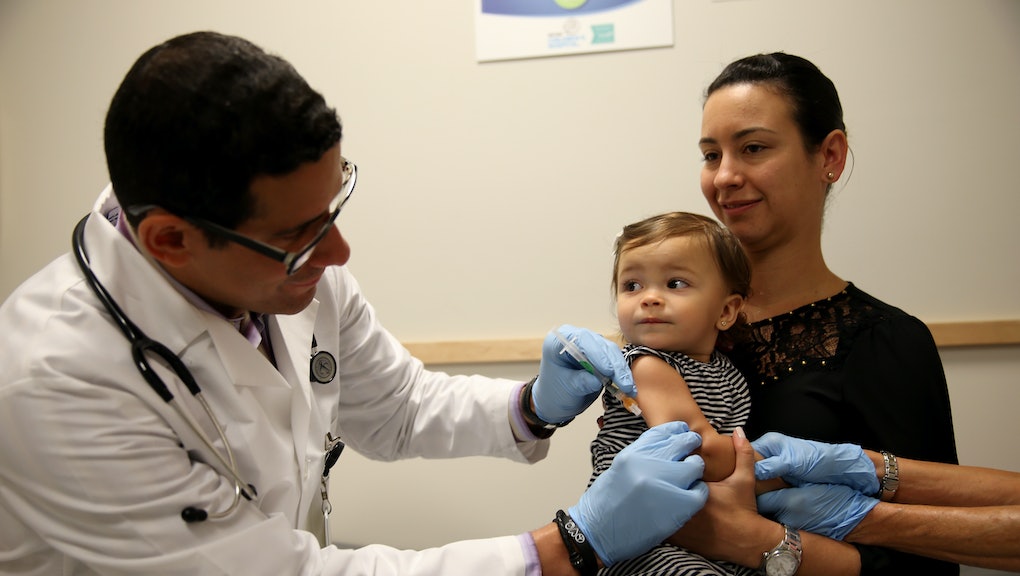 The Case for Vaccinating Your Kids, in One Disturbing Chart

A new report in the New England Journal of Medicine contains alarming news: There have been more reported cases of measles this year in America than in any year in the past two decades.

Why is this happening? According to researchers, the uptick is the result of two things. The first is the presence of the disease in places other than the U.S. Although we've seen significant progress in eradicating the disease globally, the report notes that "there is still substantial circulation of the virus in other countries." When susceptible U.S. residents travel to these countries, they can pick up the disease and bring it back here.

The second reason, however, is where the real concern lies. "An increasing number of parents in this country are hesitant to have their children vaccinated," the report warned. "Such hesitancy has resulted in an accumulation of unvaccinated populations who can become infected and maintain transmission."

These conclusions expand on recent findings from the Centers for Disease Control and Prevention, which found that of this year's 594 reported cases, the majority isn't vaccinated.

This is a worrying trend. According to the report, measles is one of the most contagious of the vaccine-preventable diseases: The average infected person is capable of transmitting the disease to 12 to 18 people. Unlike Ebola, which has received far more attention lately, measles can easily spread through coughing and sneezing; transmission doesn't require direct contact with a sick person.

The vaccine, however, works exceedingly well in preventing the spread of the disease. According to the CDC, 95 of 100 children who receive the recommended two doses will be protected.

The link between the anti-vaccination movement and the uptick in measles, as clear as it may seem, isn't necessarily causative. But it is strikingly correlative, and that should be enough to at least re-examine the situation. At the very least, given the disease's apparent comeback, leaving children unvaccinated puts them at risk for contracting the disease — an unnecessary risk, given the vaccine's effectiveness.

It's also especially worrying given what seems to be the anti-vaccine movement's general disregard for proven scientific knowledge in favor of poorly researched and severely limited pseudo-science.

"We must ... overcome vaccine hesitancy," the study's authors said. "Despite the overwhelming evidence that vaccines — including the measles, mumps and rubella vaccine — are safe, too many people still believe that greater risk is posed by vaccinating than by not vaccinating.

"Efforts are needed to educate the public that measles is a serious disease, which no one need suffer from, and that vaccines are highly effective in preventing it."