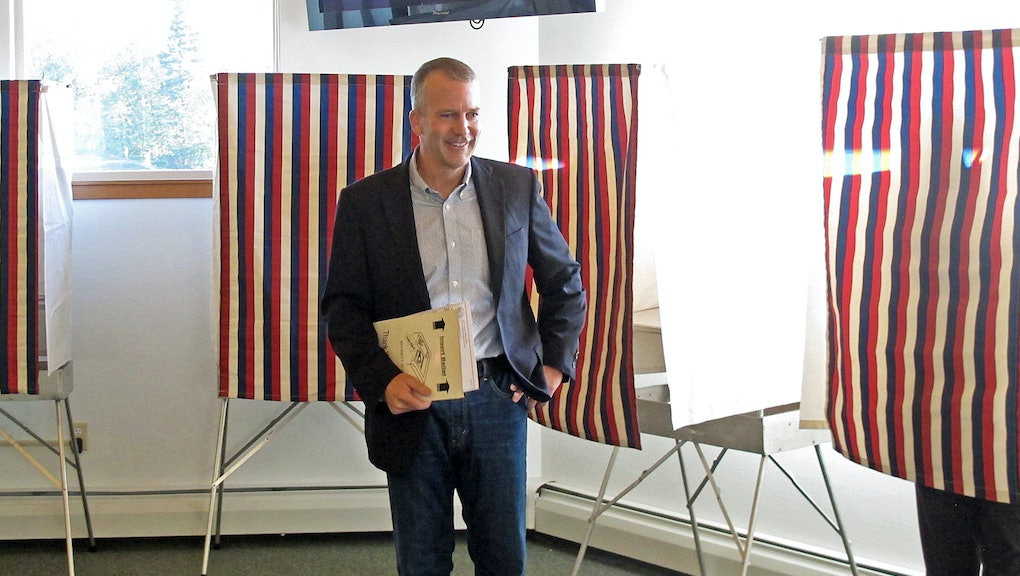 7 Charts Politicians Don't Want You to See on Election Day

The news: Tuesday is Election Day, when millions of Americans will go to the polls to vote in the midterm elections. As campaign season comes to a close, what candidates have left out can be as telling as what they're stumping for.

For many observers, this year's election is really a "referendum on nothing," a vague, inarticulate struggle over abstract issues that don't really impact Americans at all. A new poll from CNN/Opinion Research, in fact, shows not one issue is seen as "extremely important" by a majority of Americans, the first time that's happened since before the Great Recession. And this is glorious for Democrats and Republicans, who can make the midterms about their own pet issues (the Islamic State is invading from Canada!) rather than the ones that actually affect a majority of Americans.

This year is, as MacLean's Luiza Ch. Savage wrote, "a battle of billionaires." OpenSecrets estimates that total spending this year will reach an astonishing $3.66 billion, and Executive Director Sheila Krumholz told the Los Angeles Times that "As the post-Citizens United campaign finance system matures, we're seeing evidence that the traditional campaign apparatus has been overtaken by shadow counterparts."

What's more, undisclosed "dark horse" spending may play a major role in the most competitive battleground states. The New York Times reports that tens of millions of dollars in ads and negative telephone calls from murky sources are flooding into politics in the last stretches of the 2014 campaign season, pushing outside spending "to an average of at least $20 million a day last week. Total spending on Senate races reached $200 million in October alone, significantly more than in the same period before the 2010 midterms."

Many of these groups only exist to splurge cash for a few weeks and disappear entirely; the New York Times reports that 18 groups that did not exist in September spent $9 million alone through Oct. 30; 90 groups didn't spend any money until October.

This splurge in outside spending is inevitably linked with the next point:

Politicians no longer care about your opinion.

It turns out, politicians mostly care about major interest groups and the opinions of the very wealthy. The above charts from researchers Martin Gilens and Benjamin Page illustrate that "the preferences of the average American appear to have only a minuscule, near-zero, statistically non-significant impact upon public policy," meaning big corporations, the rich and major interest groups are by far the biggest drivers of what happens in D.C.

"Basically, average citizens only get what they want if economic elites or interest groups also want it," as Vox's Andrew Prokop explained. "Specifically, if fewer than 20% of wealthy Americans supported a policy change, it only happened about 18 percent of the time. But when 80% of them were in support, the change ended up happening 45% of the time. There's no similar effect for average Americans."

Now that we know that our political and economic elites aren't making decisions based on national needs, the next few charts highlight big issues that elites essentially ignored this election cycle.

Income inequality is bad and getting worse.

The richest Americans are doing much better than the rest of us, and the problem is accelerating. While the extremely wealthy have been capturing the vast majority of gains during periods of economic growth since the Reagan administration began promoting supply-side economics, since the beginning of the new millennium they're doing even better.

Economists Emmanuel Saez and Thomas Piketty calculated that in September 2013, the top 1% of earners had captured 95% of all income gains since the Great Recession ended. The results can be seen in the two graphs below, illustrated by the Center on Budget and Policy Priorities:

In fact, the situation is so bad that the bottom 90% of Americans are objectively poorer than they were in 1987.

But income inequality is not one of the driving concerns for voters this year, and Democratic politicians have toned down their rhetoric. Why? Harvard researchers have concluded it's because voters vastly underestimate just how unequal the U.S. has become, while Pew Research Center polls find that they disagree on what's causing it. And since Democrats are skittish this year, many are basically campaigning against President Barack Obama and his perceived unpopularity, rejecting his recent push to bring inequality to the forefront.

Racial inequality still exists in America, but nobody believes it.

With the shooting death of Michael Brown and endless discussion of race in the public sphere, it might be surprising to learn that America's white people broadly think that the days of racial discrimination are over. So over, in fact, that Harvard University professor Michael I. Norton found that white people now think anti-white discrimination is a bigger problem than anti-black racism. Just 16% of white Americans think that there is a "lot" of discrimination against black people, compared to 56% of black Americans.

For an example of the difficulties still faced by minority Americans, look at the line you end up in when you cast your vote Tuesday. If it's long, Mother Jones' Stephanie Mencimer argues, it's likely because you live in a precinct with more nonwhite people. In 2012, black voters waited over twice as long than white ones to cast their ballots, and that's not even counting "blatant attempts to suppress minority voting, including voter ID requirements, shortened early voting periods and limits on same-day voter registration":

We'll still have a black president after Tuesday, but the 113th Congress was 87% white. Almost all of the megadonors driving that high election spending are old white dudes.

Climate change is real, and it affects everyone.

At the exact time that scientists are pleading with world leaders to please pay attention to this greenhouse gas thing, climate change remains a peripheral campaign issue. This chart from the UN's most recent paper on global warming and CO2 emissions (released Sunday) is about as dire as can be. Far from reducing global emissions, the world is pretty much increasing the amount of greenhouse gases it emits annually unimpeded. From the New York Times:

If governments are to meet their own stated goal of limiting the warming of the planet to no more than 3.6 degrees Fahrenheit, or 2 degrees Celsius, above the preindustrial level, they must restrict emissions from additional fossil-fuel burning to about 1 trillion tons of carbon dioxide, the panel said. At current growth rates, that budget is likely to be exhausted in something like 30 years, possibly less.

In contrast, the world is spending just $400 billion annually to fight climate change.

Environmental groups are spending an unprecedented $85 million (mainly from billionaire Tom Steyer) this year to sway elections, and they're having a big impact in some races. But Republicans are still outspending the left, and even the hefty chunk Steyer is committing is having a limited impact on American perceptions of climate change. The Daily Climate's Peter Dykstra writes that despite all this money, climate change remains unlikely to be a driving force for voters.

In fact, if recent history is any indication, the U.S. political system isn't going to move away from gridlock anytime soon, regardless of who takes control of Congress on Tuesday.