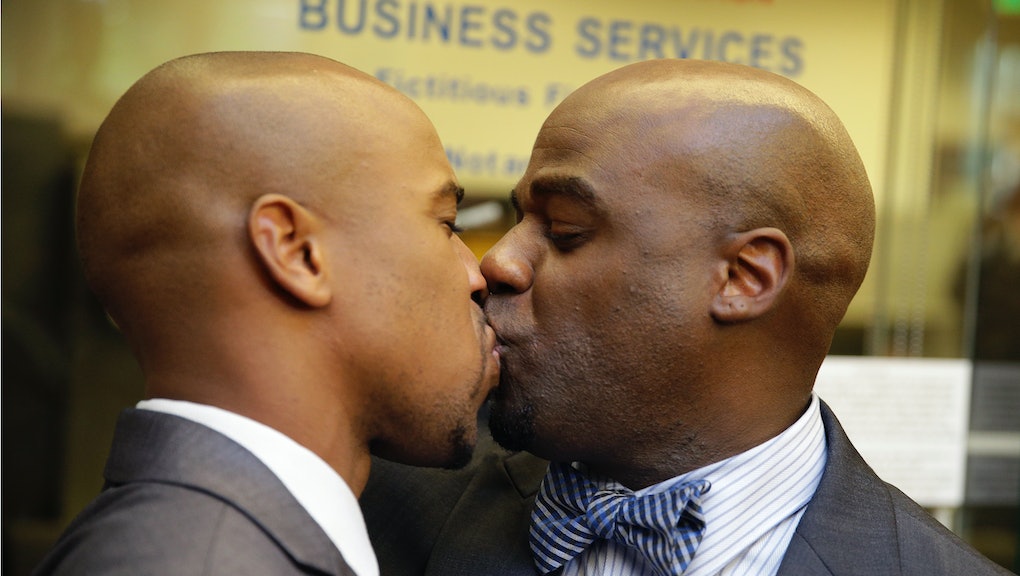 In 32 states plus the District of Columbia, same-sex marriage is now a reality. It's been a long time coming, but decades of cultural wars, biblical platitudes, increasing LGBT visibility and a slow, steady political movement have all led to what many are calling the "tipping point" for marriage equality in America. Yet even as the victories for same-sex marriage continue piling up in courts and statehouses across the country, one homophobic bigot or another makes some ridiculous argument about the dangers of equal marriage:

"It's the end of Western civilization as we know it."

"Don't be surprised by the judgment of God ... You think Ebola is bad now? Just you wait."

"These court decisions are a crime against nature."

Believe it or not, these statements, which are from the past few months alone, reveal that many people still cling to the notion that expanding that legal recognition will somehow ruin the "sanctity of marriage" across the United States. In the wake of Apple CEO Tim Cook's very public coming out, not to mention the numerous state and local elections that will affect the LGBT community this midterm season, let's take a moment to look back on some same-sex couples brazenly attempting to ruin marriage for the rest of the country:

"My parents were the first gay marriage in Fairbanks, Alaska, this Friday," Reddit user LittleCroc said in an Oct. 17 posting. "They hiked up a mountain for their ceremony and sledded back down."

In Arkansas last May, Kristin Seaton and Jennifer Rambo were the first couple in line after that state's same-sex marriage ban was ruled unconstitutional. Although the ruling is still pending an appeal, the couple got their license during a relatively brief window of opportunity. Their beaming smiles as they leave the courthouse, brandishing a copy of their marriage license, tell a story all their own:

A state senator in Nevada celebrated equal marriage coming to his home state in an amazing way: by sharing a kiss with his husband:

This couple tied the knot at a clerk's office in Indiana:

Sharon Baldwin and Mary Bishop sued and ultimately won their right to marry in Oklahoma in January. This is one of their first moments as a legally recognized couple:

This Illinois couple got married by their county clerk four months before the state's same-sex marriage law officially took effect:

This newlywed couple celebrated with more than a dozen others after the mayor of Pittsburgh married them all at once — and did so in the city's council chambers:

Then there's this couple in Oregon:

And in North Carolina:

And eastward, to Virginia:

It's hard to believe that in 2014, anyone could look at photographs of their peers, men and women who just want the right to marry the loves of their life, and claim that their joy is somehow less deserving.

But now that most Americans live in states where same-sex couples can tie the knot, none of the so-called predictions and prophesies have come to fruition. With each passing day, hundreds upon hundreds of loving couples continue to prove their bullies wrong. The tide is clearly turning, and as momentum builds across the country, the question is becoming not if marriage equality will become the law of the land, but when.