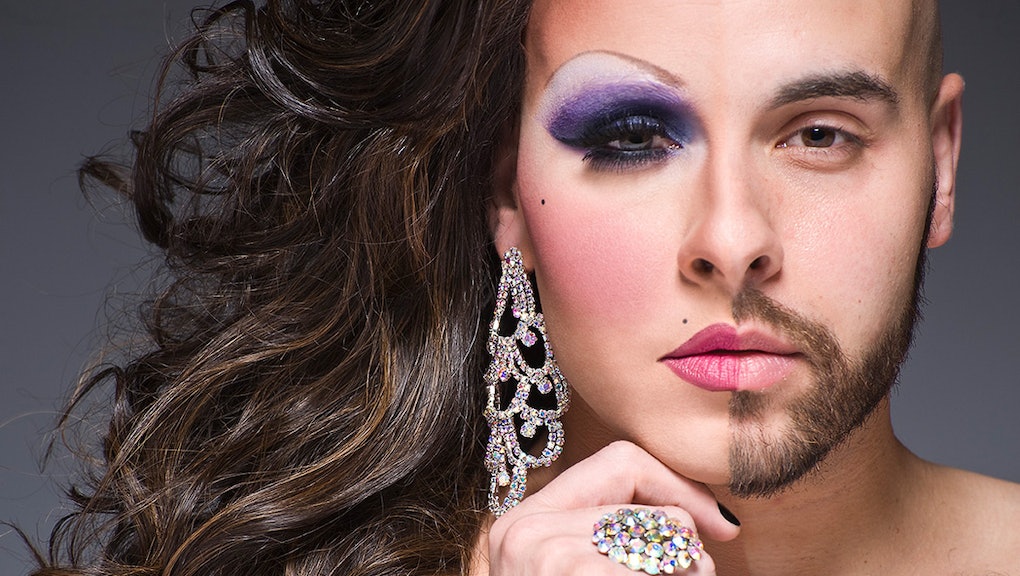 Stunning Portraits of Drag Queens Challenge How We Think About Gender

A little hair and makeup can go a long way — for a queen.

Half-Drag, Leland Bobbé's portrait series featuring some of New York City's finest drag queens, illustrates the transformative effects of makeup, not to mention the sophisticated skills of the drag queens who employ it.

Speaking with Mic, Bobbé said the inspiration for this immensely popular project, which has landed on the pages of Italian Vogue, as well as myriad websites, originated with an earlier project about neo-burlesque performers.

"I saw a full-length shot on Facebook of one of the male performers dressed as half male and half female," Bobbé said. "I liked the idea and asked him if he'd be interested in coming to my studio and shooting a tighter cropped version.... [Later] I thought it might be interesting to do the same idea ... with real drag queens. This is how the project came to be."

Bobbé was very deliberate about the framing of each shot. "The reason I shot so tight was to force the viewer to see one face as male and female without any distractions," he told Mic. The proximity allows the viewer to see all the "imperfections" of the untouched face, which "also illustrates the extreme power of hair and makeup."

"Through the power of hair and makeup, these men are able to completely transform themselves and find their female side while simultaneously showing their male side," he said in an interview with the Huffington Post.

While striking in composition and color, the close-ups also reveal the performative aspects of gender. This is something that the art of cross-dressing — and these photos show it is very much an art — enables and reveals through its explicit, at times even camp-like quality. Drag, Bobbé said, is done "to entertain the public."

Indeed, Bobbé said this project has taught him a lot about gender and gender fluidity. "There are many people who relate to gender as not necessarily just male or just female," he said. "Many people relate to gender as the way they feel inside as opposed to what they may look like on the outside."

"When I started the project, I never thought it would reach and affect as many people has it has," Bobbé said. The experience has been as illuminating and eye-opening for him as for those who see the portraits. "As far as gender performance, we all portray our gender differently," he said. "[For] some of us... it [is] more of a personal and creative statement. And they like to blur the lines."