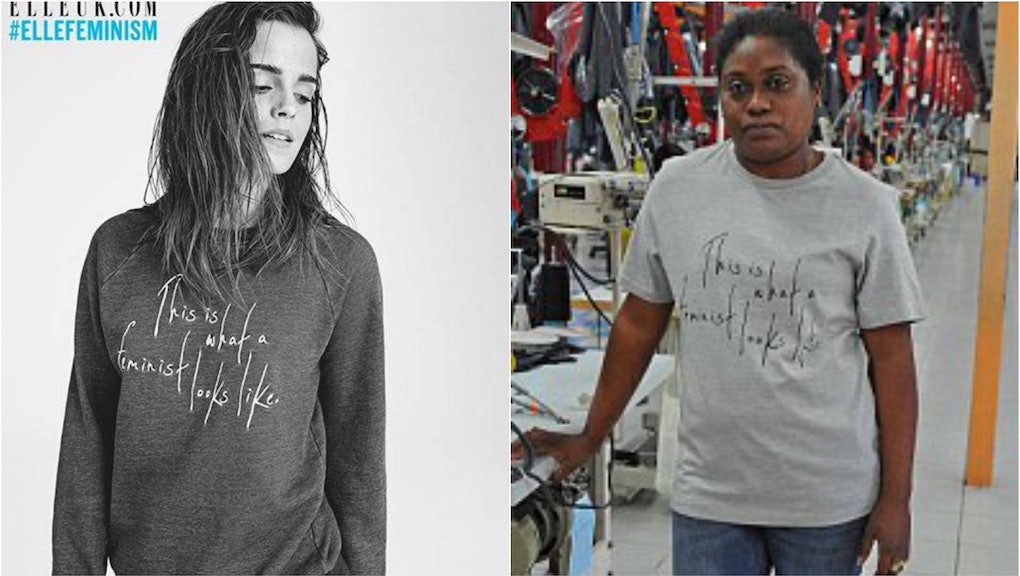 There's a Horrifying Secret Behind Those Trendy Feminist T-Shirts

"This is NOT what a feminist looks like" is perhaps what the slogan should have said.

A nonprofit that promotes labor rights for women is in hot water for, ironically, labor practices uncovered in the factory where its products featuring the slogan "This is what a feminist looks like" are made.

The problem? When financial greed trumps humane labor practices, no one wins.

The Fawcett Society faces allegations that factory workers in La Tour Koenig, north Mauritius, are working more than the legal eight hour workday and earning about $1 an hour — meaning it would take 72 hours for one worker to buy the shirt she's made. Even more disturbing is the allegation that workers, all female, are crammed 16 at a time into living quarters the size of one bedroom.

"The workers in this factory are treated very poorly," Fayzal Ally Beegun, president of the International Textile, Garment and Leather Workers Union, told the Mail on Sunday. "It would take a woman working in the factory nearly two weeks just to buy one shirt. What is feminist about that? These women have nothing in this world. They are paid a pittance and any money they do receive they send back home. They work very long hours and have no lives other than their work. They are on four-year contracts that mean they don't get to see their families in that time. What kind of existence is it when you are sharing your bedroom with 15 other women?"

The Fawcett Society responded swiftly. In a statement to the Guardian, Deputy Chief Executive Eva Neitzert expressed the charity's disappointment and promised action. "As a charity that campaigns on issues of women's economic equality, we take these allegations extremely seriously and will do our utmost to investigate them. ... We remain confident that we took every practicable and reasonable step to ensure that the range would be ethically produced and await a fuller understanding of the circumstances under which the garments were produced."

However the Fawcett Society doubled down in a statement released this morning, reporting it had found the factory in Mauritius "conforms to ethical standards": "The evidence we have seen categorically refutes the assertion that the 'This is what a feminist looks like' T-shirts produced by Whistles were made in a sweatshop."

As Tansy Hoskins notes for the Guardian, there are a lot of issue at play here, and this conversation certainly should not begin and end with the Fawcett Society's investigation. Indeed, the controversy should be a jumping-off point for feminists to examine what is a systemic and infinitely feminist issue (of the world's estimated 3.5 million garment workers, the vast majority are women).

"It's not a question of if they [The Fawcett Society] had done a couple of other checks they might have found a different factory," Sam Maher, policy officer at Labour Behind The Label, told Hoskins. "There needs to be a realization that this isn't a question of a good factory versus a bad factory, this is an entire system of exploitation."

This type of large-scale exploitation may not be front page news for online feminism, an arena that increasingly celebrates the attempts of mainstream feminists like Beyoncé as well as brands perceived to be female-friendly. But gender equality on a global scale clearly will not be achieved if exploitation and social injustice continues to play any role in the growth of the movement.

"Feminism is a really important issue," Maher said. "Ultimately it is campaigning for better feminist principles and empowering women that will actually change conditions for women in the factories. We're dealing with an entire system of exploitation that one T-shirt isn't going to change."