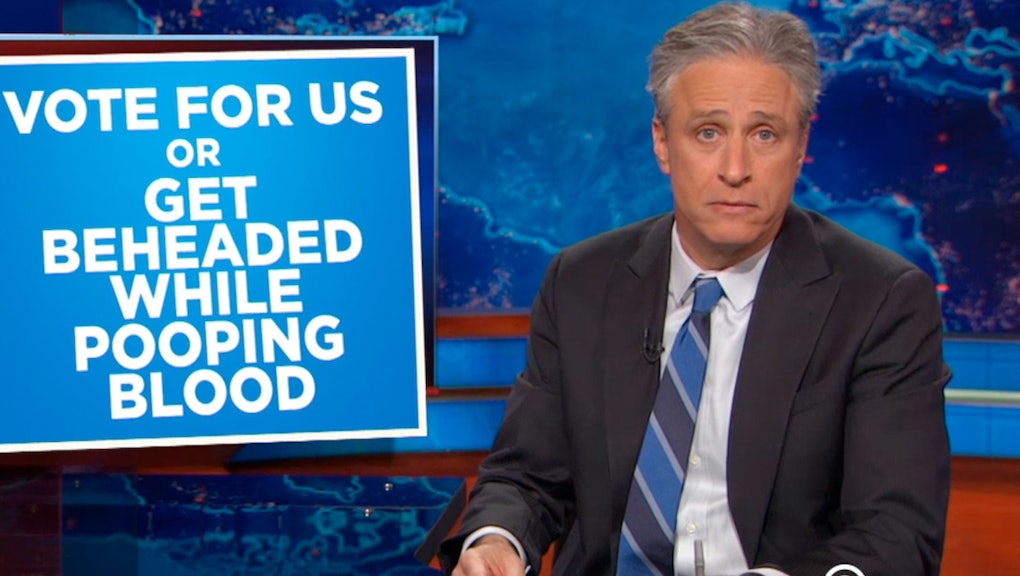 Republicans believe they're going to make gains on Tuesday thanks to their rational and purely logical style of argument. Jon Stewart begs to differ.

During Monday's episode of The Daily Show, Stewart pieced together a sizzle reel of commentators like Fox News's Bill O'Reilly extolling the intellectual merits of Republican candidates and values — "Why would anybody vote for a Democratic candidate? The answer is emotion," O'Reilly says — followed by a supercut of Republican campaign ads that go in a slightly different direction.

Terrorism and Ebola! Ebola and terrorism! They're great partners, at least if you're looking to frighten people into voting for your party. Or, as Stewart puts it, "Move over, 'Hope and change,' and welcome 'Vote for us or get beheaded while pooping blood.'"

Their other arguments, articulated by House Speaker John Boehner and Senate Minority Leader Mitch McConnell, include finally breaking that partisan gridlock in Congress everyone hates so much.

Except, of course, they'd be breaking it with policies that lots of people hate even more than gridlock, and that's if the Democrats don't start copying Republicans and filibustering everything anyway. They may promise to butt heads less, Stewart says, but "somehow, I think no matter what we do, we're gonna get buttheads."

As Stewart points out, in the past 20 years, there have been just two recorded instances of voter fraud in Texas, out of 20 million votes. And yet voter ID policies are much more likely to keep young people, minorities and women from voting.

That is, of course, a huge portion of the Democratic voter bloc. And addressing voter fraud just happens to make it harder for many of them to vote. There's your rational, pure logic right there.