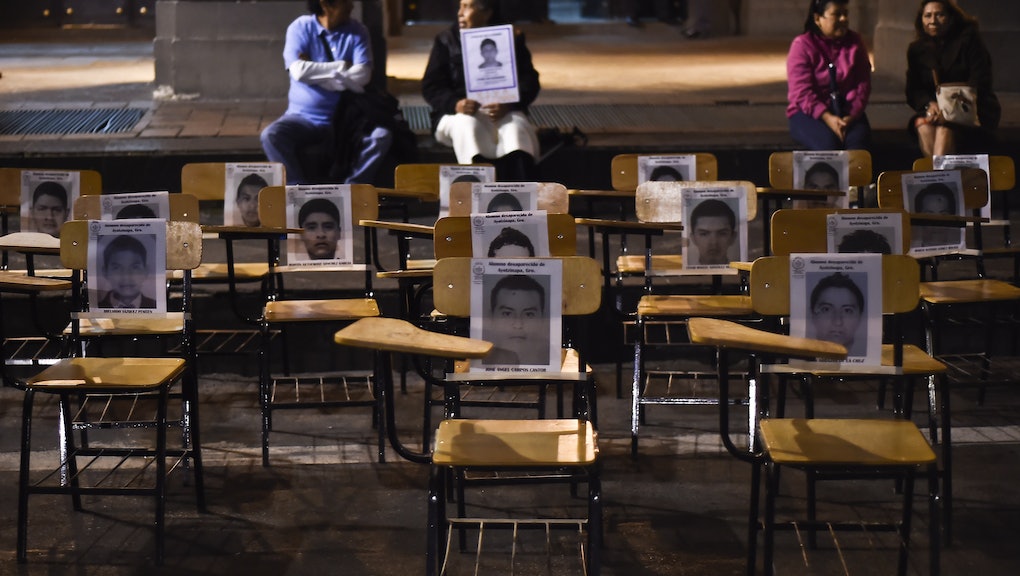 Finally, Some Justice in the Case of Mexico's 43 Missing Students

The news: After more than a month of protests and anxiety, there's finally good news in the case of Mexico's missing students.

Iguala Mayor José Luis Abarca and his wife, Maria de los Angeles Pineda, did not resist arrest when they were taken into custody at a house they rented in the capital's Iztapalapa neighborhood.

Background: The victims, men in their 20s studying at a teachers college in the rural town of Ayotzinapa, were on their way to raise funds for an upcoming protest when they clashed with local police.

Authorities say Abarca ordered the attacks because the mayor presumed the students were planning to interrupt a speech that his wife was going to make that evening. A few hours after the students' reported abduction on Sept. 26, Abarca and Pineda went missing.

The investigation also found that a drug gang implicated in the attack paid the mayor hundreds of thousands of dollars each month to secure drug routes. Payments came from the drug gang's profitable business of making opium paste to fuel the U.S. heroin market, France 24 reported.

As witnesses came forward, a search took authorities to the rolling hills of Iguala where they found mass graves but didn't identify any of the corpses as the missing students.

The disappearance sparked protests across Mexico and drew international attention. Thousands of people flooded the capital and demonstrated at the attorney general's office. They held banners demanding justice and the resignation of the president. To humanize the staggering numbers, protesters carried illustrations and portraits of each missing student.

#TodosSomosAyotzinapa (We Are All Ayotzinapa) has become a rallying point for those who can't join demonstrations in Mexico.

Why it matters: Authorities have arrested 60 suspects but didn't make progress with the investigation until now. The couple's involvement in the disappearance of 43 students is a reminder that such cases are common across the country where weak institutions are susceptible to cartel-induced crime.

In February 2013, the administration of President Enrique Peña Nieto acknowledged that more than 26,000 people had been reported disappeared or missing since December 2006.

If the Iguala investigation moves forward and perpetrators are brought to justice, it could restore the little trust that Mexicans have in the local and federal justice system. The couple, now in the custody of the attorney general's office, are giving statements that could lead to further clues.

The missing students in Guerrero state have galvanized an entire country to protest and risk retribution. Rogelio Ortega, the academic tapped to take over for the state's Gov. Ángel Aguierre Rivero, told CNN en Español last month that the state faces numerous hurdles in the wake of this unraveling collusion between the mayor and the drug gang.

"The problem today is how to successfully face these unleashed demons," Ortega said before his selection as interim governor. "How can we rebuild the social fabric?"