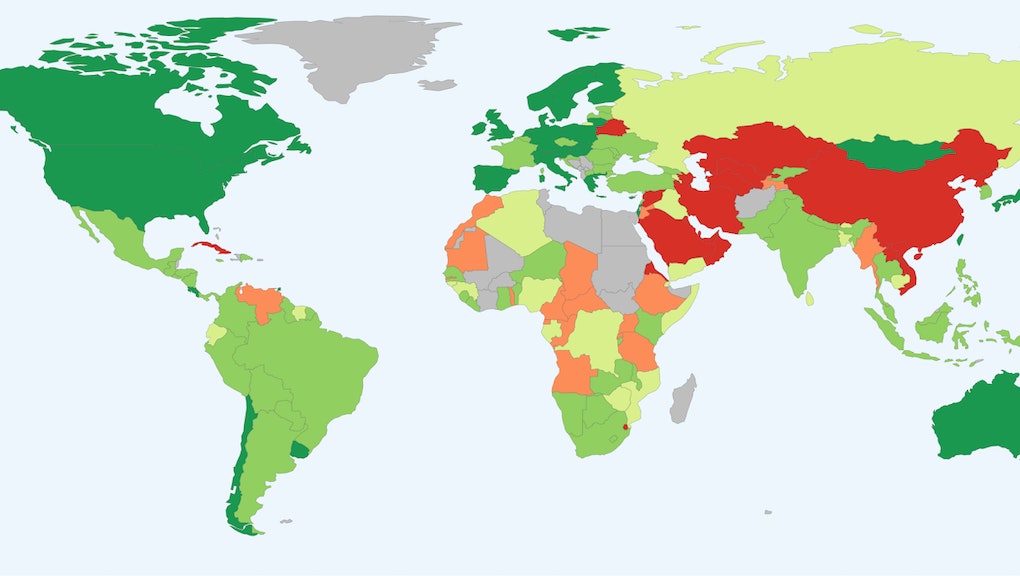 Good News: The World Is More Democratic Than Ever

Gone are the days when the world was dominated by swaths of tyrannical regimes and dictatorial rule. According to empirical evidence gathered by Max Roser, an economist at Oxford University, the world is officially more democratic than ever before, with the majority of countries under democratic control.

Just a quick glance at Roser's visualization at Our World in Data demonstrates how the changes have unfolded:

It also shows just how much democracy there really is on earth, with an interactive graphic showing major waves of change from 1900-2012:

The number of democratic states experienced a sharp rise after the breakup of the Soviet Union in 1989, with the latest data reflecting the number of countries under democratic rule in 2012:

Evidence also shows we are becoming less violent and more tolerant, and poverty around the world is declining. The conclusions seem far-fetched considering the daily news of airstrikes, natural disasters and images of loss from the conflict in Iraq, Syria or the Central African Republic, but Roser argues that kind of thinking is far too micro in what is a very macro discussion.

"It is not possible to understand how the world is changing by following the daily news," Roser wrote. "Disasters happen in an instant, but progress is a slow process that does not make the headlines."

In the past 200 years of governmental changes, democracies have grown dramatically.

"Democracy is contagious and brings about more democracy because it is very successful," Roser told Mic. "Thinking about the future, maybe the most promising development is that the young generation around world is much better educated than before."

Why is the world becoming more democratic? As the narrative and pattern of history has shown — from the French Revolution to the Arab Spring — a common grievance of the masses can topple autocratic rule. One of the catalysts for the spike in democratic regimes is growing economic inequality.

"In nondemocratic societies, the poor are excluded from political power, but pose a revolutionary threat, especially during periods of crisis," wrote political scientists Daren Acemoglu and James A. Robinson.

"The rich will try to prevent revolution by making concessions to the poor, for example, in the form of income redistribution," yet the elite can also resist and in doing so create an environment for their downfall. The latest example of the death knell for one autocratic rule unraveled in Burkina Faso last week.

A similar pattern of inequality was observed when the West African country's President Blaise Compaoré attempted to amend the constitution to extend his 27-year rule, and tens of thousands of Burkinabé protested across the country in response.

Another factor leading up to resistance is simply one's ability to purchase food. Data scientists at the New England Complex Systems Institute presented examples when high food prices led to mass uprising, Mic reported. Yaneer Bar-Yam of the NECSI "charted the rise of the Food and Agriculture Organization Food Price Index — a UN measure that maps food costs over time — and saw that whenever that figure rose above 210, riots broke out around the world."

Bar-Yam's hypothesis became reality during the 2008 economic collapse and the Tunisian protests in 2011. He also predicted the Arab Spring weeks before it reached a tipping point in Egypt.

But almost no matter what the causes are, more democracy across the world is undoubtedly a good thing.

"Taking all these and more long-run trends into account paints a very positive picture of how the world is changing," Roser told Mic. "If you look at this over the long run, then we see the change from a world where everyone but a few enlightenment thinkers thought that democracy is impossible to a world in which half the world population lives in democracies."

Talk about change we can believe in.