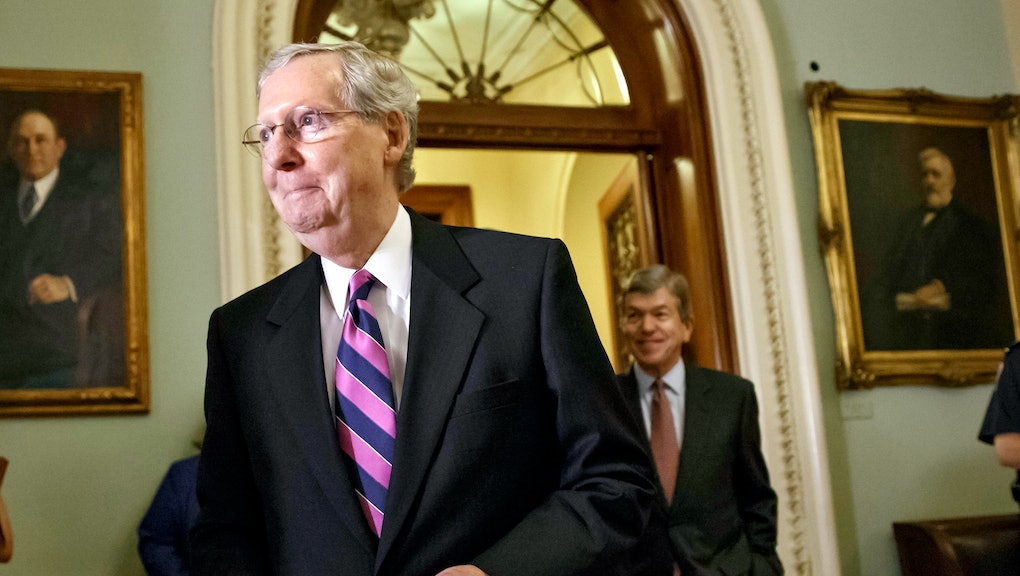 Senator Minority Leader Mitch McConnell (R-Ky.) is projected to hold on to his Senate seat and defeat Democratic challenger Alison Lundergan Grimes. The race was called by multiple news outlets minutes after polls closed in Kentucky.

His victory puts him one step closer to realizing his ultimate political goal: becoming majority leader of the United States Senate. If Republicans across the country emerge victorious as expected, McConnell is almost sure lead them as they take the levers in the upper chamber.

For Kentucky's still-senior senator, it's been a long time coming.

McConnell was first elected in 1984, winning three more terms after that with relative ease, but Democrats painted a target on his back this year. Actress Ashley Judd publicly considered a challenge. In the end, the job — and the strong the support of national Democrats — fell to the daughter of the former state party chief.

Grimes, whom the New York Times initially described as a "Democratic upstart half [McConnell's] age," put up a formidable fight. She would have become the state's first female senator had she won the race. She rallied a strong base of women voters by honing in on equal pay and childcare and blasting McConnell for recent votes against legislation that included renewals of the Violence Against Women Act.

And, according to several surveys over the last few months, her efforts in attracting female voters were successful. As recently as early October, polls were showing Grimes with a slight lead over McConnell. Criticism that he'd fallen out of touch with the state after 30 years in Washington seemed to be taking hold.

But just as quickly, the tide changed. On Oct. 9, Grimes refused to say whether she'd voted for President Obama in 2008 or 2012, opening her up to a slew of criticism and mockery about the embarrassing episode. The attack ads came hard and fast, and McConnell soon pulled ahead by 7 points.

By the end of the race, McConnell had opened up a comfortable lead and was all but certain to emerge victorious. His chance of winning in the final projections were all but certain:

McConnell has already talked about the possibility and outlined the party's plan should they gain a Senate majority. According to McConnell, his first goal as majority leader "would be to see if there are things we can agree on with the president," such as "comprehensive tax reform" and "trade agreements," NPR reported.

Although the final call on which party captures the majority in the Senate might not happen for as long as a month, most polls suggest the GOP will clinch it eventually. Considering McConnell hasn't lost a race yet in the course of a four decade-long political career, his chances of claiming the most powerful position in the Senate are looking pretty good.

Say hello to a 72-year-old Washington power player who is just now, finally, entering his prime.