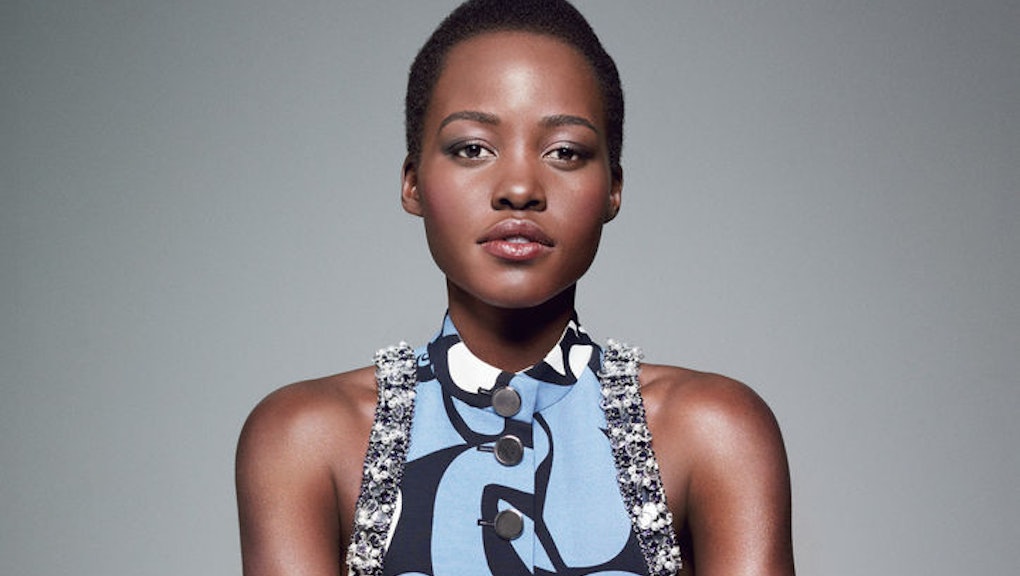 What Glamour's Woman of the Year Suggests About American Beauty Standards

Glamour has named Lupita Nyong'o its Woman of the Year, an honor that caps a remarkable yearlong run for the 31-year-old actor and model who has broken down industry barriers while proving that America's long-rigid beauty standards may be starting to crumble.

In 2013, the Huffington Post conducted a survey looking at the racial makeup of all the cover models between September 2012 and September 2013. Not surprisingly, the tally betrays a serious disparity in terms of cover girl diversity.

Enter Nyong'o. Since her Oscar-winning debut as Patsey in 12 Years a Slave, the actress' rise has been the feel-good story of 21st century Hollywood — that of a dark-complexioned black woman, an industry rarity by any measure, who emerged from nowhere and became an Internet celebrity, Oscar-winner, fashion icon and avatar for all manner of narratives around race, talent and beauty in a notoriously white industry.

In addition to Glamour, Nyong'o was named a Lancôme ambassador and People's Most Beautiful Person this year. Her newfound prominence is a focal point of her Glamour interview, which also addresses the troubling beauty standards that govern much of the excitement around Nyong'o's success.

"European standards of beauty are something that plague the entire world — the idea that darker skin is not beautiful, that light skin is the key to success and love," Nyong'o told Glamour. Kenya, where she spent much of her youth, is "no exception."

"When I was in the second grade, one of my teachers said, 'Where are you going to find a husband? How are you going to find someone darker than you?' I remember seeing a commercial where a woman goes for an interview and doesn't get the job. Then she puts a cream on her face to lighten her skin, and she gets the job! This is the message: that dark skin is unacceptable."

Unfortunately, this is also the message sent too often in Hollywood, where actress Gabourey Sidibe made the cover of Elle only to have her face lightened substantially using photoshop.

Nyong'o's journey toward overcoming this white supremacy narrative is also a major point in her now-iconic speech at the Essence Black Women in Hollywood Luncheon in February:

Affirming that a dark-skinned black woman can shape the Hollywood beauty conversation is an encouraging, if incomplete, development. The real measure of Nyong'o's impact will show in the long term — i.e. once significantly more women who look like her gain access to an industry that traditionally marginalizes and devalues them, especially women with darker skin.

Meanwhile, add this Glamour cover to Nyong'o's already remarkable string of recognitions. Hopefully it opens many doors for others as well.