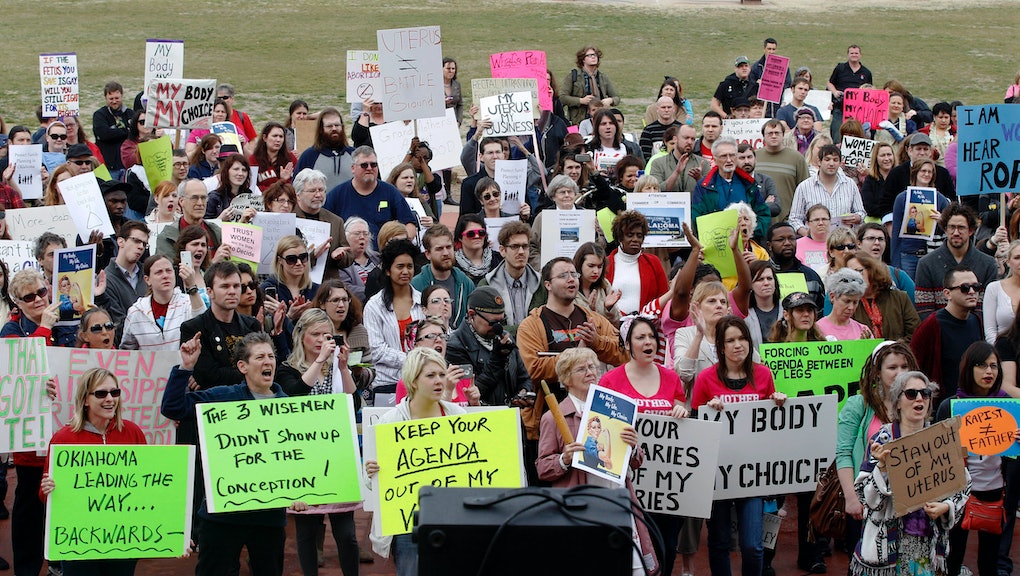 Two of Oklahoma's most restrictive and controversial abortion policies were blocked Tuesday by the state's Supreme Court in what could be a preview of a U.S. Supreme Court battle over women's right to choose.

The pair of restrictions — one of which requires abortion providers to have admitting privileges at local hospitals, while the other would ban the use of a certain abortion procedure 49 days after pregnancy — are lifted "until the constitutionality of the Act is fully and finally litigated," the court unanimously ruled. That could take a while.

The background: While supporters of the regulations say it's safer when an abortion provider has admitting privileges, since a woman can be taken to the hospital if something goes wrong, it mainly serves to shutter provides and decrease access.

Larry Burns, the provider who brought the lawsuit that kicked this whole thing off, said he applied to every hospital within 30 miles and was not accepted anywhere, essentially ending his provider status.

And doctors like Burns aren't exactly plentiful. According to the Guttmacher Institute, 96% of counties in Oklahoma — home to more than half the state's women — don't have any abortion clinics.

The restrictions were put in place despite the relative safety of abortions; fewer than 1% of abortion patients experience complications, according to the Center for Reproductive Rights.

Not just there: The Oklahoma law being rolled back bears a similarity to restrictions in many other states, some of which have had the same legal wrangling over access.

A federal judge in Louisiana, who also implemented an admitting privileges requirement, allowed providers to stay open while a lawsuit over the restriction goes through. Alabama is facing an ACLU lawsuit over its own onerous rules, which can require a minor to undergo a hearing with a judge before getting an abortion, while the state can appoint a lawyer to argue for the fetus.

In Oklahoma, the restrictions will head back down to the district court in a process that could end up with the highest court in the land having to make a pretty big abortion ruling. It's likely at least one of these states will see a law end up there, so Oklahoma has as good a chance as any.