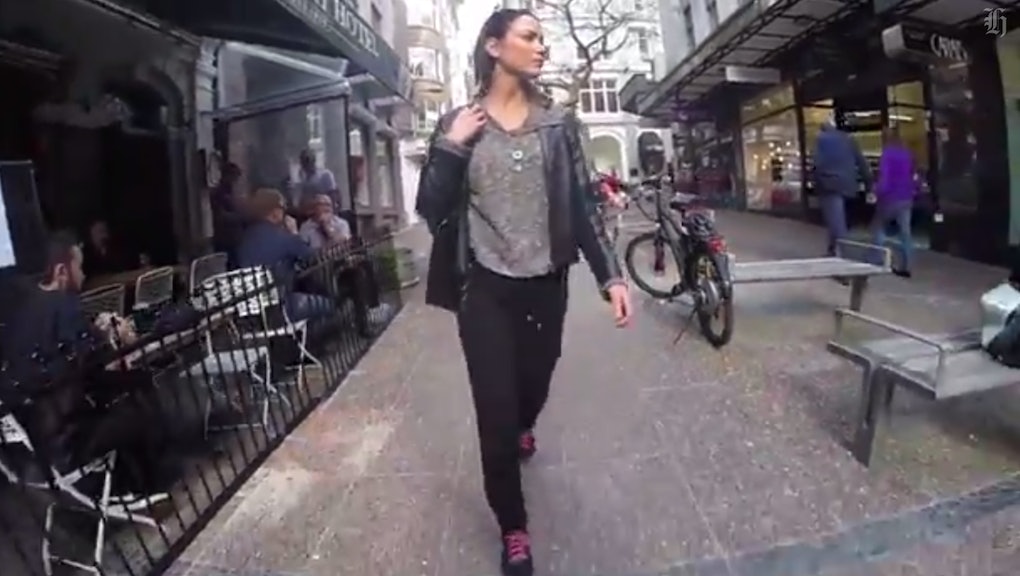 Imagine a world where a woman can enjoy a  stroll down the block without having to deal with catcalls from clueless men. Believe it or not, such an environment might very well exist — even if it's about 9,000 miles away from the streets of New York City, where a video of a woman being relentlessly street harassed over the span of 10 hours went viral last week.

After seeing that viral video by the anti-harassment organization Hollaback! staff at the New Zealand Herald wondered what would happen if a similar experiment was staged in Auckland, their country's largest city. They hired model Nicole Simpson to walk around the city, followed by a hidden camera, to see what would happen.

And the result? She wasn't catcalled — not even once.

In the video, Simpson walks pasts construction sites, shops, restaurants and even parks — places that are the epitome of public visibility. Although she turned numerous heads while walking by, only two men spoke to her. One man asked for directions and she obliged. The other had a slightly different agenda, asking Simpson if she was Italian and telling her that she looks nice, all the while apologizing for interrupting her stroll.

The difference between the New York and New Zealand videos is revealing. Although this is only the experience of one New Zealand woman, Simpson wasn't once shouted at, asked why she wasn't talking back or followed for minutes on end.

These are two different situations, two different urban areas and two different countries with particular cultural and social mores. But why is it that a woman in New Zealand's largest city can walk down a street in relative peace compared to most women in America's largest urban center?

The truth could lie between how both cultural and legal norms in New Zealand regard street harassment as opposed to the United States, where many politicians and broadcast pundits believe that catcalling is a "compliment" and doesn't create an environment that makes women feel uncomfortable and unsafe.

According to a report by law firm DLA Piper and the Thomson Reuters Foundation, the kinds of behaviors seen in the New York City catcalling video would be unquestionably punishable under New Zealand law. But in the United States, only a relatively small number of jurisdictions nationwide have similar measures sanctioning street harassment.

So perhaps there's hope for men and women in America yet — but it'll take moving the conversation beyond how women should respond to catcalling to how we can create a culture where street harassment is simply not tolerated.