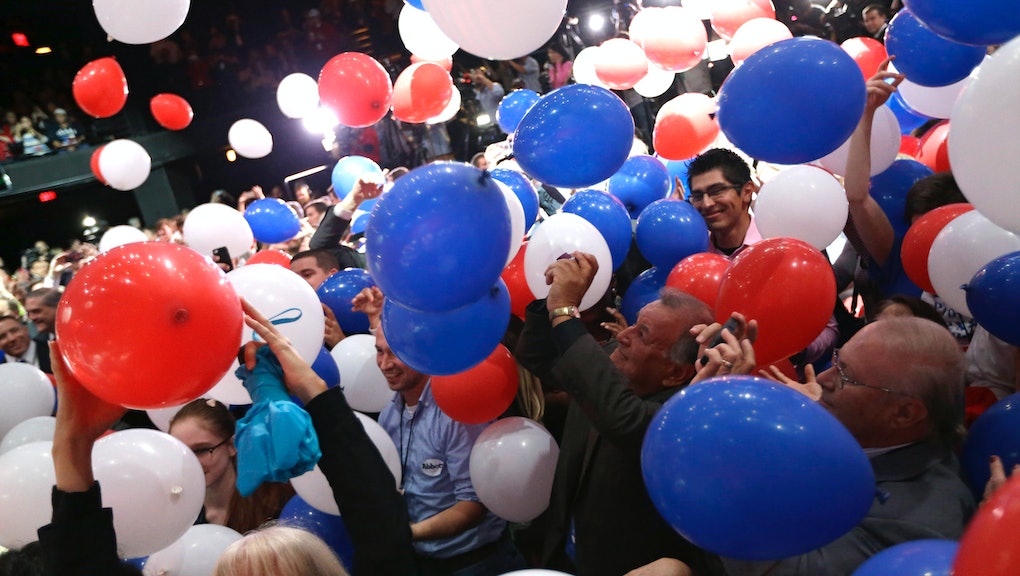 Republicans Have Taken the Senate in an Absolute Bloodbath

The elections were an absolute bloodbath for the Democrats.

Republicans won control of the U.S. Senate in a sweeping series of victories in Tuesday's midterm elections, picking up seats in key states like Iowa, North Carolina, Arkansas and Colorado.

Election night played out almost perfectly for the GOP, as evidence of a Republican wave began to build with the results of each race.

Sen. Mitch McConnell kicked things off in Kentucky, defeating challenger Alison Lundergan Grimes in a race that was called almost immediately after polls closed. McConnell, the current minority leader, is now set to become majority leader in the new GOP-controlled Senate. His victory was expected — Grimes ran a notoriously bad campaign from the start — but set the tenor for the rest of the Republican victories over the course of the night.

Cory Gardner gave the Republicans their fifth victory of the night in Colorado at 10:18 p.m. when the Associated Press called the race in his favor against sitting Democratic Sen. Mark Udall. The race in Colorado was one of the most closely watched in the country, with a fiercely fought campaign focusing on Udall's attempts to emphasize abortion rights and women's issues.

The races in Iowa and North Carolina were the final nails in the Democrats' coffin. GOP candidate Joni Ernst defeated Bruce Braley, bringing Republicans to the six seats needed to wrest control of the Senate. Outlets called the race for Ernst at 11:23 p.m. The race in North Carolina was called soon after, securing the Republicans' victory.

The Republican victory means the party will gain control of both the House of Representatives and the Senate for the first time since 2006. Republicans capitalized on favorable terrain, focusing on vulnerable Democrats who were swept into office on the Obama wave of 2008. Several of their victories were on Democrats' turf — namely Colorado and Iowa, both of which Obama won in 2008 and 2012.

If there's any glimmer of hope for the Democrats, it exists in the fact that Republicans' gains in this year's midterms will likely be short-lived. Just as Democrats were playing defense this year, so too will Republicans be forced to play defense across the Senate map in 2016. Many of the Republican seats that are up for grabs in two years were those won by tea party candidates in 2010, and will be vulnerable with a more diverse and larger electorate that votes in presidential years.

But for now, Republicans are celebrating, and for good reason — they won a sweeping victory in races across the country. Democrats are licking their wounds, and preparing for life in the minority.