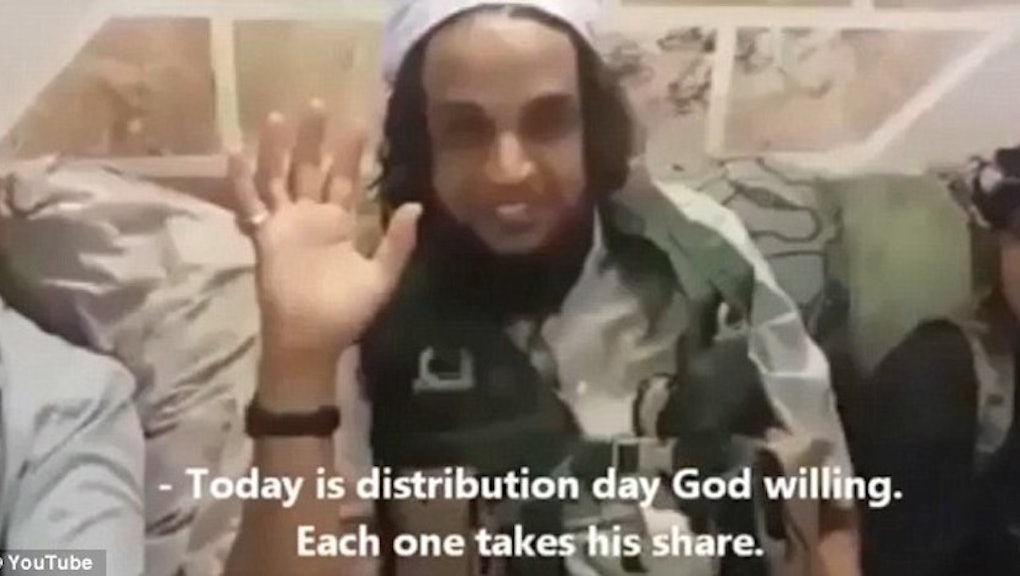 The news: Last month, the UN published a disturbing report detailing the Islamic State's systemic practice of forcing women into sexual slavery, often using them as payment to the fighters. And now, a video has emerged that seems to confirm these atrocious acts.

On Monday, journalist Jenan Moussa of Dubai's Al Aan TV network drew attention to footage purportedly showing IS fighters discussing these trades, and quoting the Quran to justify their actions. The video has since been made private, but excerpts stemming from the video are pretty horrific themselves.

"Today is the day of [female] slaves and we should have our share," Vice quoted one IS fighter as saying. "If she is 15 years old, I have to check her, check her teeth," another says.

This is systemic violence not only against women but also a religious minority. Nearly all of the women forced into sexual slavery by IS seem to be from Yazidi and Christian communities.

In particular, the Yazidi — a tiny ethno-religious group of around 500,000 people — have been targeted by IS for refusing to convert to Islam: While men in these villages have been massacred, the women and girls have been raped and used as incentive to IS fighters to further perpetuate this violence.

"Women and girls are brought with price tags for the buyers to choose and negotiate the sale. The buyers were said to be mostly youth from the local communities," the 29-page UN report, which was based on 500 witness interviews, found. "Apparently ISIL was 'selling' these Yazidi women to the youth as a means of inducing them to join their ranks."

Thousands of Yazidi people have been forced to flee their homes, and between 3,000-4,000 Yazidi women and girls remain missing.

This is far from the only crime IS is committing against women. While IS may be using women as a recruitment tool, that's not all: The UN report found that the terrorist group has also taken a retaliatory approach toward working women and has "attacked and killed female doctors, lawyers, among other professionals."

IS militants have already murdered one female political candidate and abducted another and have instructed female doctors to wear different colors to distinguish their marital status, making unmarried women bigger targets.

What's happening to Yazidi women and girls is not just violent misogyny. It's ethno-religious persecution that threatens to wipe out an entire minority group as well as the despicable objectification of turning human bodies into currency, which is then used to continue this sickening cycle. A cycle that must be stopped.