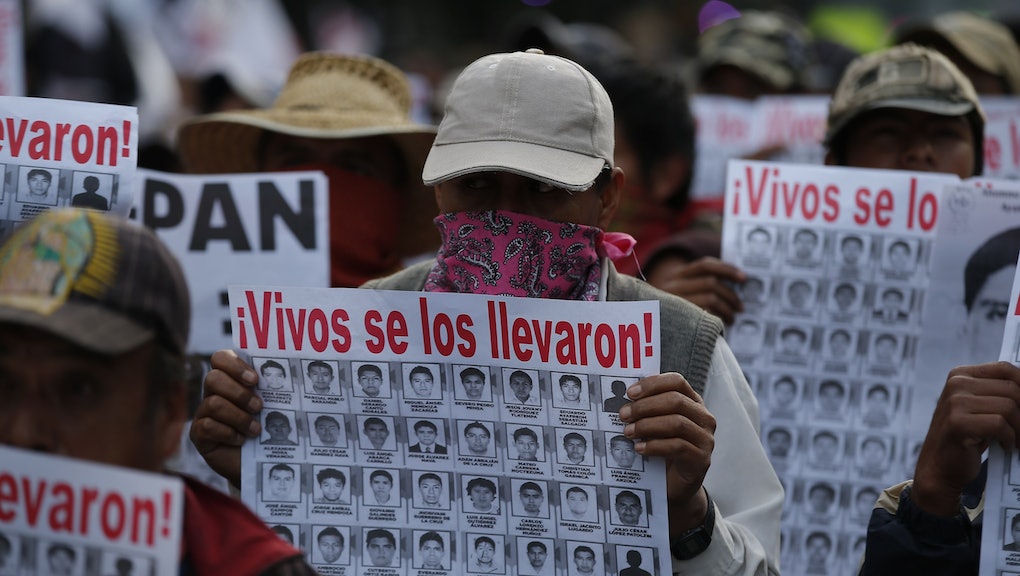 What the U.S. Should Be Fighting Instead of ISIS

The world learned of her murder on the Internet.

The woman in the photo turned out to be @Miut3 herself. "My life has come to an end today. Don't put your families at risk like I did," the tweet read. "I'm sorry. I died for nothing. They are closer on our trail than you think."

This gruesome slaying was not the latest Islamic State execution of a Westerner. The body and Twitter account belonged to María del Rosario Fuentes Rubio, a citizen journalist killed for work published on social media. Rubio actively reported on alleged government collusion with criminal and drug cartels prior to her death. She posted her reports on social media and relayed information to other journalists.

Given how she died, it's easy to assume Rubio was killed documenting the atrocities of the Islamic State (IS), which has cut a bloody swath across northern Iraq, arousing fear and indignation around the world. On June 10, the group seized Iraq's second-largest city, Mosul, overnight, then captured Tikrit on the following day. On Aug. 8, the U.S. military launched its first series of airstrikes in northern Iraq and Syria, and efforts to train a proxy army to fight IS characterize the American counterstrategy.

But beheadings, massacres and wholesale killings are not limited to IS brutality, and these militants have overshadowed a crisis taking place in a country that can be seen from U.S. backyards. Americans remain largely unaware of the thousands killed by cartels every year in Mexico, and the violence doesn't end at the border: According to Narcosphere, a website tracking drug-war violence in the U.S., as many as 5,700 Americans were killed on U.S. soil from 2006 to 2010.

The violence is systemic. The collusion between Mexican drug cartels and public officials manifests in tens of thousands of "disappeared" people. Public tolerance for the country's ongoing cycle of violence reached a tipping point with the disappearance of 43 students who clashed with local police in September.

But the world is more fixated on IS. A simple look at Google Trends over the past three months reveals that American audiences are far more focused on the abstract violence spreading across Iraq than the brutality pressing on our southern gates.

"This raises a question: Are Americans primarily concerned with [the Islamic State's] atrocities or with the fact that Muslims are committing these crimes?" writes Musa al-Gharbi, an instructor at the University of Arizona and an affiliate of the Southwest Initiative for the Study of Middle East Conflicts. "Even as the U.S. media and policymakers radically inflate [the Islamic State's] threat to the Middle East and United States, most Americans appear to be unaware of the scale of the atrocities committed by Mexican drug cartels and the threat they pose to the United States."

So why are Americans more concerned about the distant threat of IS, rather than a drug war already affecting many parts of the country? And what, then, does that say about us?

Mexican drug cartels versus IS: Objectively, Mexico's cartels kill far more people each year than the Islamic State. A United Nations report on the protection of civilians in armed conflict in Iraq documented the casualties in the country: An estimated 9,000 civilians were killed and 17,386 were wounded in Iraq in 2014, more than half since IS fighters rampaged through the northern part of country. Several thousand deaths in Syria have yet to make the tally.

By comparison, the Mexican drug cartels' crimes overshadow the atrocities committed by IS thus far. In 2013, members of drug cartels killed more than 16,000 people in Mexico alone. Another 60,000 people were killed between 2006 and 2012, "a rate of more than one killing every half-hour for the last seven years."

Cartel violence extends far beyond Mexico thanks to the drug market's porous, transnational borders. And while IS attacks the American psyche, the cartels attack American citizens and their wallets.

Mexico is a major supplier of heroin to the U.S. market and its largest supplier of methamphetamine and marijuana. According to the U.S. Department of Justice, production of these three drugs increased in the past 10 years. More than 90% of cocaine travels through Mexico and into the U.S., an increase of over 18 percentage points since 2002, when it was 72%.

U.S. officials point to conflict in Syria and Iraq as the clear and imminent threat despite the higher number of casualties fueled by a metastasized drug war. As of October, more than 5,500 people have been killed in Iraq since the IS offensive began. Over the span of six years, an average of 12,896 have died each year because of Mexican drug cartels.

But by contrast, the cartels killed 293 Americans in Mexico from 2007 to 2010. The groups have also repeatedly attacked U.S. consulates in Mexico. In October 2008, two assailants fired their weapons and threw a grenade at the consulate in Monterrey.

"While [the Islamic State's] beheadings are no doubt outrageous, the cartels tortured, dismembered and then cooked one of the Americans they captured — possibly eating him or feeding him to dogs," al-Gharbi writes. "The cartels' atrocities are not restricted to the Mexican side of the border."

So why the disparity? Part of the problem, of course, is media attention. Many Western media outlets didn't see the Islamic State coming, but that didn't stop the major cable networks from flooding TVs with updates on the advances of IS militants across northern Iraq and the Western world's response.

This is understandable, since Americans are wary of returning to Iraq after more than a decade of war in the Middle East. And it doesn't help that the Islamic State knows exactly how to play into Western anxieties in order to spread fear and terror.

The extreme difficulty of reporting news in each place is a significant strategic advantage for both the cartels in Mexico and IS in Iraq and Syria. While IS has executed a handful of journalists, the cartels have killed 57 since 2007, with most of the victims investigating the cartels or officials linked to criminal activity. The Committee to Protect Journalists (CPJ) ranks Mexico seventh in its index measuring impunity. The most dangerous country for journalists is Iraq.

But the cartels have taken a different approach to their media portrayal. After all, whoever controls the flow of information, whether it's coverage of drug violence or investigations on public officials, controls daily life, in Mexico as in any other country.

"The drug war has not only become a battle for smuggling routes, but also a war for the control of information," Carlos Lauria, the CPJ's senior program coordinator for the Americas, told Mic. "Cartels know that information is key to control, the price of drugs and routes."

"Journalists and their work are affected," Lauria said. "But it's also the ability of Mexican citizens to exercise their human rights. They are afraid and terrified. They cannot do the work because there's this wave of violence that is cowing them into silence."

It's not just a question of the complexity of news coverage of IS and Mexico, respectively; it's a question of how they're covered.

"The U.S. government cannot formulate an effective response to these much more severe threats [of cartels] because the American public is far too busy disparaging Islam while the U.S. military kills Arabs and Muslims abroad. One thing is certain: America's obsession with ISIL is fueled by Islamophobia rather than any empirical realities. "

Al-Gharbi may be right. The fear of the Islamic State exacerbates a deeper trauma, one left over from the emotional and physical devastation of 9/11 and the years of terror anxiety that followed. Raw Islamophobia may be too strong a sentiment, but the psychological fear of Islamic terror runs deep in post-9/11 America, more so than any cartel.

And psychology matters. "Fear of things that might actually hurt us, like the flu or smoking, is understandable and healthy," writes Olga Khazan on the psychology of irrational fears in the Atlantic. "It's the phobia of things — snakes, sharks the youth — that pose virtually no threat at all that's more puzzling. (The last shark attack death in the continental U.S. was in 2012. Meanwhile, 30,000 people die in car accidents every year). Even in 2013, people thought more frequently about the possibility of a terror attack in the U.S. than they did about the prospect of their own hospitalization."

International media are beginning to take notice of the decades-long crisis as the growing outcry for justice for the 43 missing students spark protests across Mexico. On social media, the slogan #TodosSomosAyotzinapa (We Are All Ayotzinapa) has gathered momentum. The students attended Ayotzinapa and went missing in the city of Iguala in late September.

Thousands of protesters rallied in Mexico City and protested in front of the attorney general's office last month. The writing on their banners, walls and city pavements demand, "They were taken alive. We want them back alive."

Who's going to solve this crisis? "The U.S. has a role and should engage Mexican authorities," Lauria said. "But ultimately, it's the task of the Mexican government to put an end to this wave of violence,"

In February, Mexican President Enrique Peña Nieto was on the cover of Time magazine. The headline was "Saving Mexico: How Enrique Peña Nieto's Sweeping Reforms Have Changed the Narrative in His Narco-Stained Nation."

But the luster may fade. Peña Nieto's ambitious reforms in education and the economy will continue to take a back seat if perpetrators like those involved in the disappearance of students from Iguala do not face justice.

Now is the time for the U.S. government to refocus its efforts on more imminent threats than the Islamic State. As the overwhelming evidence suggests, no one is immune from the violence wrought by cartels, writ large because of collusion between each layer of governance — from the police to mayors and governors — and various cartel groups.

In addition to paying for Mexico's drug war with the lives of U.S. citizens, Americans pay for the cartel-induced violence with taxpayer dollars.

In 2007, the U.S. expanded its security cooperation with Mexico by designating nearly $1.4 billion in funds for Mexico, Central America, Haiti and the Dominican Republic. The bulk of the money went to Mexico "with a mandate to 'break the power of organized crime, strengthen the U.S. southern border, improve Mexican institutional capacity and reduce the demand for drugs,'" according to data from the Council on Foreign Relations (CFR).

The partnership was renewed in 2010, an initiative and next round of funding that aimed to address the socioeconomic factors underneath the violence. Yet nearly a billion dollars in funds seems of questionable utility.

"Analysts differ on how to address Mexico's festering internal strife," writes CFR's Brianna Lee, "but a growing number agree that the U.S. war on drugs is a failure and necessitates a new approach."

U.S. and Mexican authorities may have been too late to prevent the death of Rubio. But now, both governments have a chance to rethink the war on drugs — and tackle a threat far more dangerous than the Islamic State.