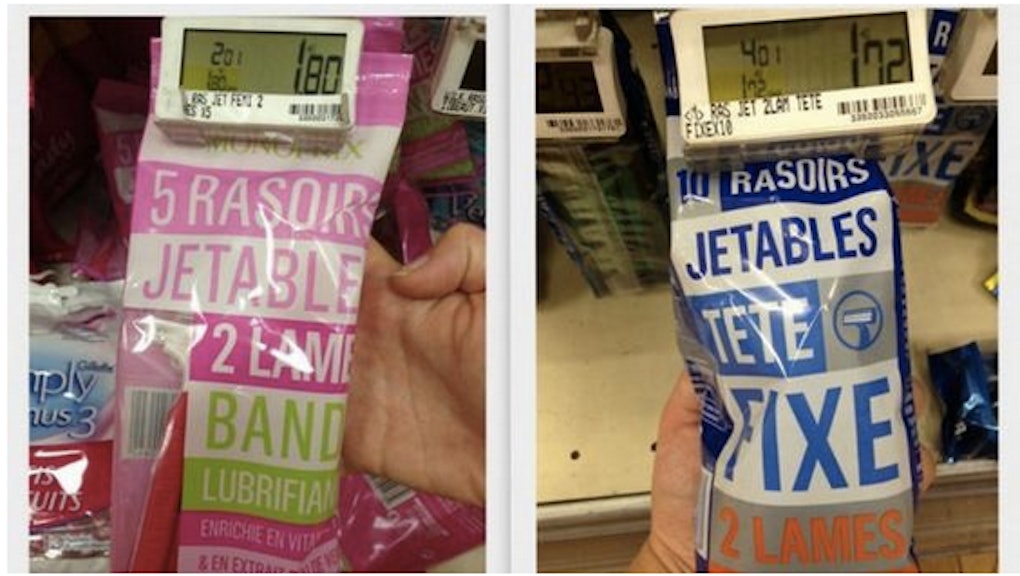 France Is Taking a Stand Against Sexism the U.S. Would Never Consider

It costs more to be a woman than a man.

It's an infuriating and relatively unnoticed fact: Not only do women earn less than men, all around the world, they are essentially being "taxed" for their purchases.

Sometimes called the "invisible," "pink" or "woman" tax, this capitalism-induced phenomenon reflects the price difference between otherwise functionally identical products marketed to women as opposed to men. Unlike in the United States, however, France has decided to do something about it.

Like women around the world, French women pay more while earning less than men: "According to the European Commission, French men earn 14.8 percent more than women," ThinkProgress reports. "The Business and Professional Women Federation, however, says the gap is closer to 28 percent."

To correct this double standard, the Georgette Sand Collective, a popular women's rights group in France, gathered over 30,000 signatures and successfully petitioned the government to investigate the causes for the cost penalty.

In addition to political action, the advocacy has been paying off on social media. The Tumblr Woman Tax has allowed people to document examples of what it calls "gender pricing." There is a 5 euro difference between a "femme" purple backpack and the same one in "masculine" black:

Personal care items, from toothbrushes and toothpaste to deodorant and razors, are everyday items known to reflect the woman tax as well:

France's secretary of state for women's rights, Pascale Boistard, even took to Twitter to protest the cost differential between men and women's products, ironically tweeting, "Is pink a luxury color?"

This gender problem is not just France's. The United States also has a pink tax, compounded by the gender wage gap in which women earn $0.78 to every dollar men earn. Huffington Post contends that, on average, women end up paying $1,300 more annually than men because of the pink tax on products. Meanwhile ThinkProgress outlines some of these cost differences, which occur regardless of ingredients. Indeed, a study from the University of Central Florida concluded that "on average, women's deodorants were priced 30 cents higher than men's, when 'the only discernible difference was scent,'" according to Forbes.

The majority of women have experienced paying more for items made "for" them, even if they don't realize the extent of the problem. In fact, the tariff is pervasive throughout a number of industries, from dry cleaning to hair cuts.

Let's not forget, there is no Equal Rights Amendment to prohibit such gendered price inflation. From "home mortgages [and] health insurance, [to] cars and car repairs," Marie Claire's Lea Goldman writes, this tax is, surprisingly, one that is legally sanctioned: "Though civil rights laws prohibit job and housing discrimination on the basis of race, gender, or sexual orientation, there's no federal law banning discrimination in the sale of goods and services."

To put it bluntly, "gender pricing is standard industry practice," Goldman states, and retailers who profit with "untold millions" from this tax aren't likely to change their pricing indexes anytime soon.

Until the gender wage gap is legally erased and products are priced equitably, women need to pay more attention and influence the issue through the one way that never fails: their wallets. As Rhiannon Lucy Cosslett advises in the Guardian, "Women also need to stop buying into this con and realize that we can purchase men's razors and deodorant too."