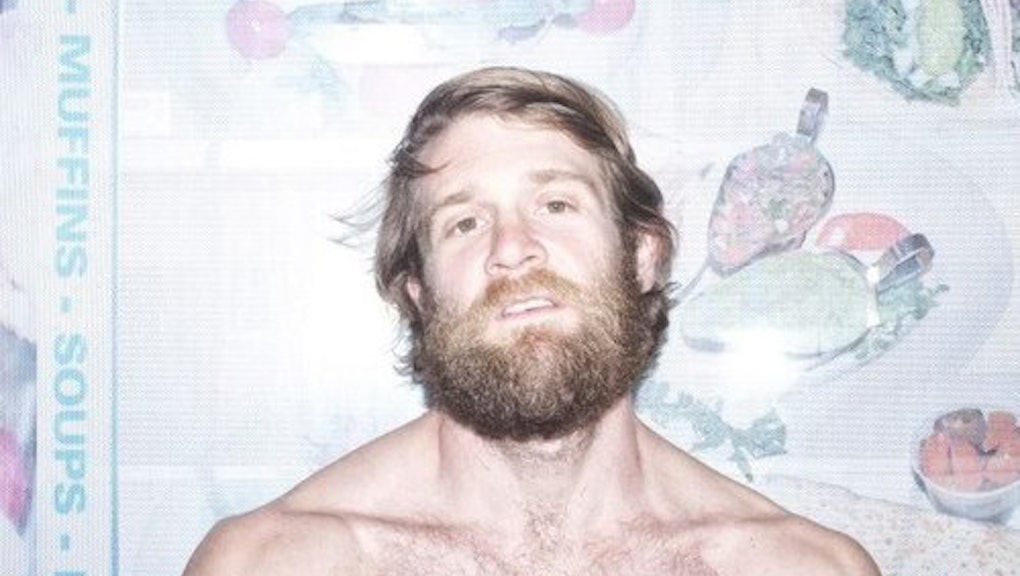 Colby Keller is a 6'2", 205-pound Communist with a passion for coffee-table art books, genetics and iced tea. He has a bachelor's degree in anthropology, a master's degree in fine arts, and a love-hate relationship with his own beard.

Colby Keller (CK): It's going really well! There's just a lot that I have to do before I can really start the project, so it's just a matter of getting that stuff started before I can get on the road. I mean, I've filmed a few videos so far. The first state was Maryland, with a friend who lives in Baltimore. I filmed another in L.A. with a friend. I've filmed in Maine, West Virginia, D.C., and I'm filming in Florida next.

SB: Not filming in New York?

CK: Usually I'll put out a call, but I didn't put out a call for New York — it was people who approached me. I mean, the point of the project is to collaborate with people, so I really want to build relationships with different artists around the country. People have responded saying that they want to be models, but I don't know if the sexual chemistry would be right to film with them.

SB: How do you winnow it down to the people that you feel you have the right chemistry with?

CK: I'm very open to whatever direction the project may go in, even if they're directions that don't correspond with my own aesthetic sensibility. I'm open to the project failing, in a lot of ways. It's not so much me winnowing it down as much as me negotiating with those people. I mean, you're a very attractive man [Ed.: *blush*] but let's say you submitted pictures and I just don't think that the chemistry is right, I'll say to you, "Hey, I would love to film you if you have a partner in mind, but I don't know if we would work together on film."

SB: How's the reaction been from the arts community? Have they been receptive?

CK: Well, it's hard to gauge that. I had a conversation with an artist yesterday who might end up working on this with me. I'm kind of in a great position, in that I think that no one takes me seriously, and that's a point of strength. My assumption is that the art world doesn't care, and I want to keep it that way.

SB: Why do you think that the art world doesn't care?

SB: What's the end result of #ColbyDoesAmerica? Do you want to do an installation, a gallery space, just throw it up online and see what the reaction is?

CK: For me, it's more about the process. I hate to have a specific thing in mind and work towards it. I feel like that's not productive for me as an artist. It's really important to leave that option open. For work to engage an audience, there has to be something subtracted from the piece that the audience can put into it.

SB: You studied anthropology as an undergrad, and you got your MFA in Baltimore. When did you decide that art was going to be a major part of your life?

CK: I actually went to an arts school in Houston, where I grew up. I had a scholarship to this school since I was in middle school, and I went to this school when I was in college. I studied basically everything, but with a strong focus on painting and sculpture, mainly because I'm horrible at it and I like a challenge. I think I like being frustrated, to some extent. You should gravitate towards the difficult thing. And now, that means facing, head-on, what I've had to do to survive as a human being, which is sex work. I need to confront that as an artist and interrogate what that is, and interrogate what art is, particularly within the market that it exists in now, which is very problematic.

SB: All you have to do is page through The $12 Million Stuffed Shark to realize that the economics of the art world are screwed up. What are you reading?

CK: I actually just got some new books. I just finished Willing Slaves of Capital. If you want to know what my project is about, you should read this book. It points out all the problems inherent to basically enlisting people into my own desire to create something —it's a difficult thing! Trying to think through all of those problems, that book hit it straight on.

SB: You've talked about how capitalism relates to labor in general, and sex work in particular. How do you think it interferes with the art space?

CK: Honestly, if there's any one thing that makes me a communist, it's my relationship with the art world. Art is something, and I hate to say this, it's very hokey, but it's a sacred thing for me. It's done a lot for me. It's taught me what being a human being is about, and what's possible as a human being, and the market has so thoroughly co-opted the language of art that it can be depressing to see it. I mean, I love going to art galleries, even though I know that what can go on behind the walls can be kind of gross.

CK: In both spaces, there can be a lack of solidarity. It creates huge egos in young kids, and then destroys them, or teaches them that they have to produce one specific thing for the rest of their life to make shit-tons of money. It has really distorted what art is about.

SB: Have you read Piketty's Capital in the Twenty-First Century yet? I'm not giving you a reading list, I promise.

SB: How does CockyBoys feel about #ColbyDoesAmerica? Are you going to be doing studio work while you work on this project?

SB: You were abstinent at one point.

CK: I was abstinent for a total of seven months, but it got to be too unbearable. I did learn that for a lot of these projects you have to make rules, and you also have to break rules. It just so happened that there was this beautiful, insanely hot guy who was interning in Baltimore, and I was like, "We're going on a date! And I am going to fuck you!" In the project where I was giving away my possessions, I had a bust of Lenin, and I ended up giving it to him as a special token. There are still good people out there! People who can actually find me attractive!

CK: I rarely find people that I am interested in having sex with. Chemistry is tricky, and honestly, I try to have hookup sex pretty frequently, but I wanna say that about ninety percent of the time, it doesn't work. I can't tell you how many times I've tried to have sex with someone and they can't even get an erection. Like, does not happen. It's hard not to take that personally. I've noticed that the more recognizable I become, the more frequently that happens.

SB: How do you meet people? Are you an app guy? OkCupid? Christian Mingle? Bar scene, gym?

CK: I've only met guys online. Apps are frustrating, but there's something really interesting in the way that people relate to each other on apps. I'm actually very shy.

CK: I think that it has. But I was, like, borderline Asperger's. Like, right now, if there were this many people [waves at crowd in café] I would just leave. I wouldn't even say goodbye to you.

SB: So you were just a big, football-player-type guy who was painfully shy? Did you do sports in high school?

CK: No sports. I hated PE, actually. It was a really traumatic experience for me. Eventually the school offered a distance learning physical education program, where you could go to a gym, and I realized that the more hours you went the more credit you would get, and I'm an overachiever — straight-A student. If I didn't get straight 100s, I would beat myself up. So the opportunity to go to the gym and get as many hours out as I could was totally my thing. In PE, there'd be times when I would throw the ball to, I don't know, the third baseman when I'm supposed to throw it to the pitcher, and everyone would yell at me.

CK: I briefly had a bully in middle school. Thinking back on it now, he very well may have had a crush on me? I hung out with the nerdy loser kids, the immigrant kids, the Mormons, and this bully would specifically target me. Thankfully, the school pot dealer, this huge guy who'd been held back, like, four years in middle school, would patrol the school, and he beat the shit out of him if he ever touched any of us. It was this incredibly weird mafia protection. We weren't friends with the pot dealer, but I think he sided with the underdogs.

SB: When you're not working, what do you do for fun?

CK: Everything is work! Hardcore Calvinist upbringing. I have a very leisurely life to some, but spending two hours at the gym? That's office hours. Reading? That's work. Watching film? That's work. There's very little that I don't consider to be work. I want to conceive of leisure as a positive good. If I need to call it "work" to justify it, then that's the way that I'm gonna proceed. This is what capitalism does: You can only justify your identity through your profession, which is a very oppressive idea. When I lived in D.C., the first thing people ask is, "So what do you do?" And if it's not an answer they like, you're trash to them. I used to work for a lobbyist.

SB: Which is crazy to me! You just don't seem like the kind of person who would be happy in Washington.

CK: I mean, I'm fascinated by politics. My boss was profoundly contradictory and this fascinating character: high up in the first Bush Administration, a member of the Fellowship and a closeted homosexual who was into some very kinky sexy. You realize in lobbying that it's this horrible scam, and that democracy does not work. It does not work. The only people that benefit from it are the super-rich. You have to sell yourself to the devil to get a tiny bit of something, and it's awful. And it creates a lot of self-hatred.

CK: I have. Honestly, I'll probably continue to vote in presidential elections – although I'm not going to vote for Hillary, I can tell you that. I wish there were a good Communist on the ballot. Probably like Green Party or something like that.

SB: Obviously, there's going to be tension between a communist worldview and the fact that you're a sex worker. You're turning your body into a literal commodity. How do you circle that square?

CK: Well, we're all in the same system. I have to feed myself. I have to find a way to sleep at night. And there's no escaping the system. I do consider myself to be a communist —finding spaces where communism exists or where you can create it with other people. It's not going to be perfect, and I think that this project is going to face a lot of those complications. But I have to. You either face it or you ignore it, and that's not helpful.

This interview has been edited and condensed.