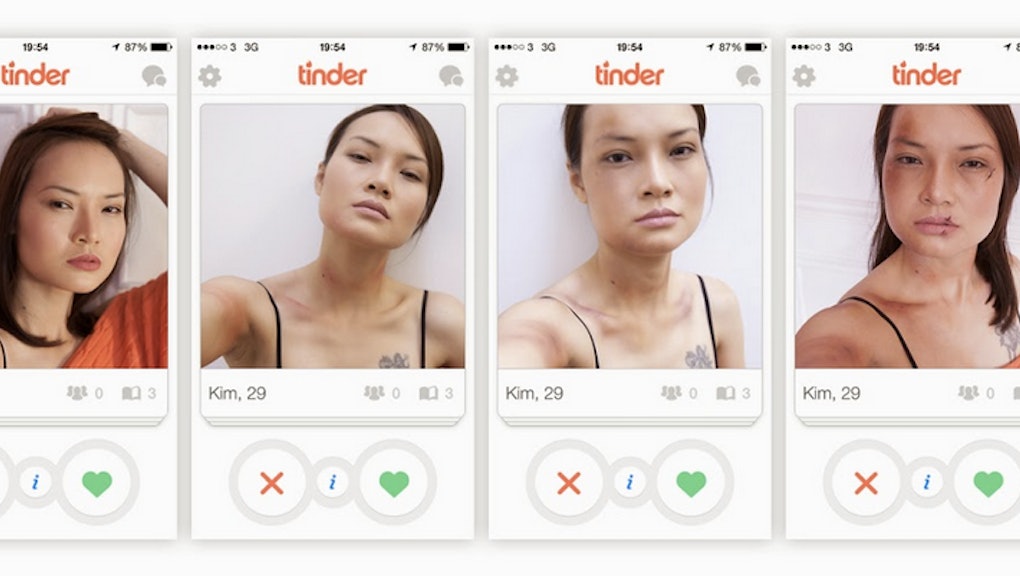 Dudes posing with tigers, adventurers scaling Machu Pichu, women doing their best "sorority squats" — all things you expect to find on Tinder. What you don't expect to see: sex trafficking.

But a powerful campaign is putting the troubling but important facts about sex trafficking in front of Tinder users, right beneath their swiping fingers. To raise awareness, the Immigrant Council of Ireland and Irish advertising agency Eighty Twenty created a slate of female "profiles" that appear normal at first glance, but with each swipe reveal the progressive damage sex trafficking has on each of its victims.

Using a "native advertising" model, a user will see one woman's photo, seemingly a regular Tinder profile. But one swipe will reveal a second photo of the same woman, then a third and so on, until the user is presented with a fact about sex trafficking and a link allowing them to contact their politicians and demand laws that will end human trafficking.

Jarring? Definitely, especially since so many Tinder users swipe rather mindlessly, and with a very different kind of sex on their minds. But the stark contrast with the typical Tinder experience is exactly the point,  the campaign's creators say.

"These profiles have so far been very well received by users of Tinder, with a large number of comments from users who are shocked upon hearing about the realities of sex trafficking in a modern society," Eighty Twenty wrote Wednesday in a blog post.

"It is our policy to constantly explore all forms of media to help us reach new people to raise awareness," Jerry O'Connor of the Immigrant Council told Mic, "and this particular project is very much in line with that approach." Embedding the powerful messages in an app accomplishes a unique kind of reach. As of April, Tinder had about 275,000 Irish users and was growing every day; anecdotally, the hookup app seems to be "everywhere" in Dublin.

The Immigrant Council is optimistic.

"While results are preliminary," O'Connor told Mic, "our first hope is that it will make a new audience aware of the crime of human trafficking, which is now similar in size to drug smuggling and illegal arms trade."