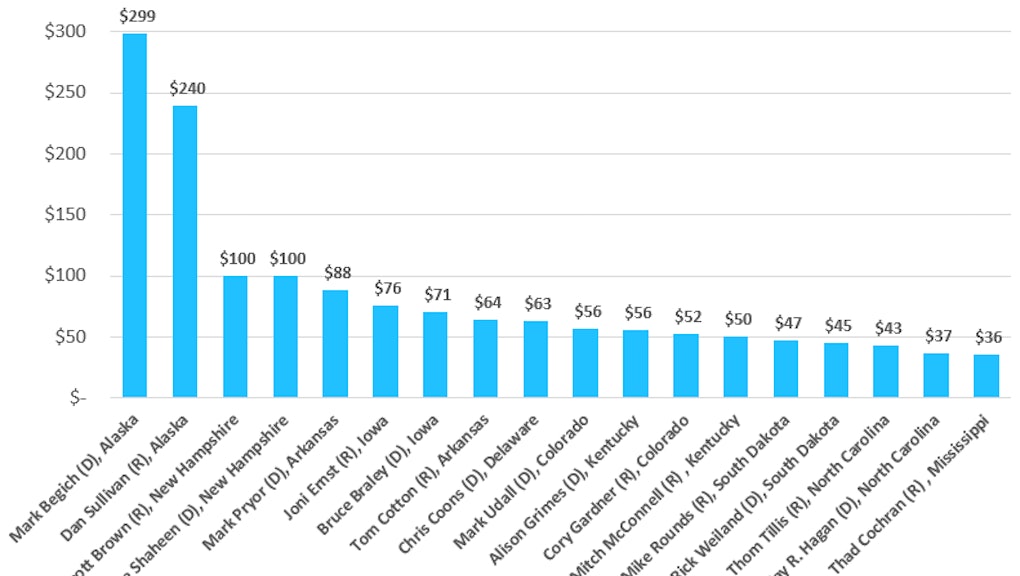 Which Candidate Spent the Most Money per Vote in the Midterms?

Do you want to feel really and truly loved by the politicians vying for your support?

If yes, try moving to Alaska.

Democratic Sen. Mark Begich spent an average of $299 per vote, the cost of a new iPhone 6 Plus (with contract). The guy who beat him in that race, Republican Senator-elect Dan Sullivan, got a little more bang for his buck, paying an average of $240 for each of his 110,203 votes.

Calculating expenditure figures from the Center for Responsive Politics, which take into account spending by the campaigns and outside groups, in primaries and in the general election, against the final vote counts reported by Politico, Mic determined how much each of the major 2014 Senate candidates spent to get the attention and support of the average voter.

The figures show that the one candidate who really have most used just a few more bucks was Republican Scott Brown in New Hampshire. He and Democratic Sen. Jeanne Shaheen got similar mileage from their spending ($100 per vote), but Shaheen spent $25,010,860 to Brown's $23,492,200. Brown also had to spend some money during his primary campaign, so this also goes to show the power of the incumbency in the final days of a tight race.

In the cycle's most expensive race — the most costly for a single Senate seat in American history — North Carolina Republican Senator-elect Thom Tillis spent less efficiently ($43 per to her $37) than Democratic Sen. Kay Hagan, but made up for it by outspending her on the whole by more than $10 million.

Democrat David Alameel's doomed challenge of Texas Republican Sen. John Cornyn cost a little more than $5 million total, but came out to just $3.56 per voter. Cornyn beat Alameel by more than 27%, so the Democrat might have been better off buying them each lunch.

The big takeaway: The value of your vote in Senate races has everything to do with where you live. Competitive race? More expensive. Smaller population? More expensive. Higher cost of ad space in the paper, online and on the airwaves? Much more expensive.

As for whether or not this makes for a better, fairer and more participatory democracy, the answer is a pretty resounding "no." But with all that money out there, it's hard to see how anything changes anytime soon.