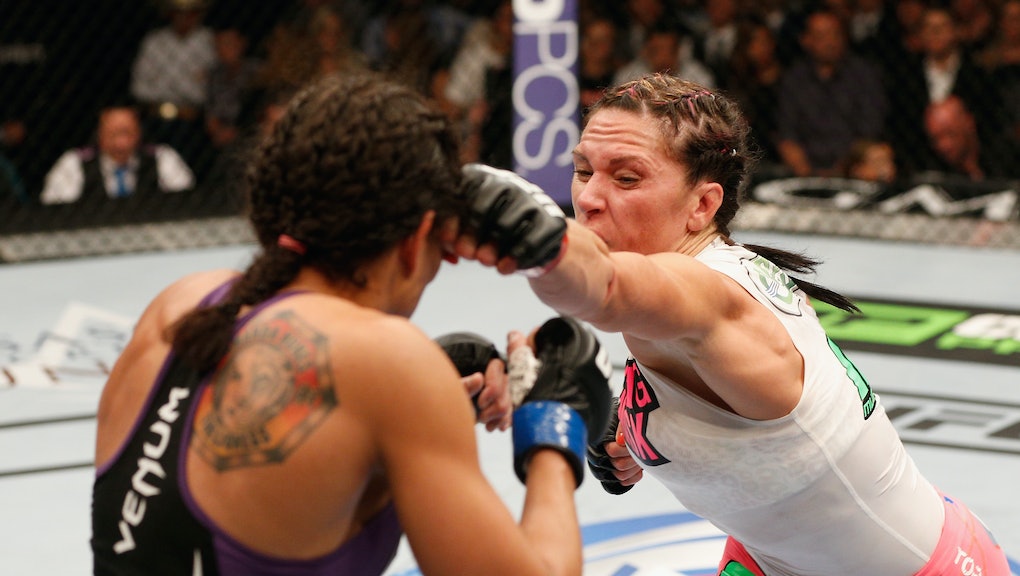 When people think about martial artists, they might think of fights like Bruce Lee versus Chuck Norris or Jean-Claude Van Damme versus Bolo Yeung. Movies perpetuate the idea that martial artists are men in ridiculous physical shape, deploying dynamic self-defense tactics to protect themselves from bad guys.

But there are numerous martial art disciplines throughout the world; martial arts, after all, generally refers to any structured form of combat. And because there are so many, martial artists come in different shapes, sizes, ages and genders. But one thing unites all these fighters: unrelenting, disciplined and determined strength.

When people hear the words tai chi, they might think about the 50-somethings gracefully moving in the park. Well, tai chi, believe it or not, is actually a Chinese martial art. According to the National Institute of Health, tai chi was "originally developed both as a martial art and as a form of meditative movement."

So watch out, those 50-somethings may be graceful, but they can be dangerous.

Nor does it know one body shape.

Remember that idea of martial artists being in ridiculous physical shape? Well, these sumo wrestlers are on the opposite end of the spectrum. The average height and weight of a sumo wrestler is over 6 feet and nearly 330 pounds, but some sumo wrestlers weigh much more. One sumo wrestler actually weighed more than 800 pounds at one point.

This Japanese martial art is meant for the big boys.

These pictures of German and Spanish karate champs were taken from the 2014 Karate World Championships in Germany. There has been an increase in popularity in karate among women since 1980, the first year women participated in the event. There was only one classification for women at that time; in 2014, there were eight.

Even when it's been traditionally done by men.

Mixed martial arts is still a very male-dominated sport, but there is a growing popularity for women's mixed martial arts. As Bleacher Report's James MacDonald said, "Embracing female athletes is an important cultural step, and one that [MMA] should be proud to be a part of."

With powerful women like Ronda Rousey competing at such a high level, the sport's popularity will only increase each year.

There's no one right uniform to wear.

Gatka is a Sikh martial art popularized in India, originally developed in the 15th century for means of self-defense, according to the Gatka Federation of India.

Although the individuals above are performing gatka for more ritualistic purposes, there is also a competitive, sporting aspect to this particular martial art that is increasingly popular in the West.

The discipline itself is a style of fighting between two participants, both carrying wooden sticks. The purpose is to make an attacking move on your opponent and to also defend yourself in the process from counterattacks. When watching a competitive gatka match, you might notice it has many similarities to traditional fencing.

Brains are as important as brawn.

So why are those boxers hanging out right next to a chessboard? Good question. Because it's chess boxing, of course. This is the sport that adds the martial arts aspect of boxing and the intellectual dimension of chess, and media outlets are starting to notice. The game is most popular in Europe, but it's played in 13 different countries including the United States, Germany and India.

The rules of chess boxing consists of 11 alternating rounds boxing and speed chess, with each round lasting three minutes long.

A fighter can be as graceful as a dancer.

It may look like the people pictured above are performing some type of break dancing or acrobatics routine, but they are actually performing capoeira. It's is a Brazilian martial art that has elements of fighting as well as elements of dance.

As the Kansas City Star notes, capoeira has a history dating all the way back to the 16th century, when "slaves disguised the martial arts form as a dance to ensure their masters did not catch on that they were attempting to protect themselves."

And this particular martial art is still going strong in Brazil and around the world.

What stood out was that these Middle Eastern women competed while wearing a hijab. In the same Olympics, a female Saudi judo participant was nearly prohibited from wearing the hijab while competing, a decision averted with a compromise.

In a time when the sport lacks a large Muslim presence and voice, these women are paving the way for future participants.