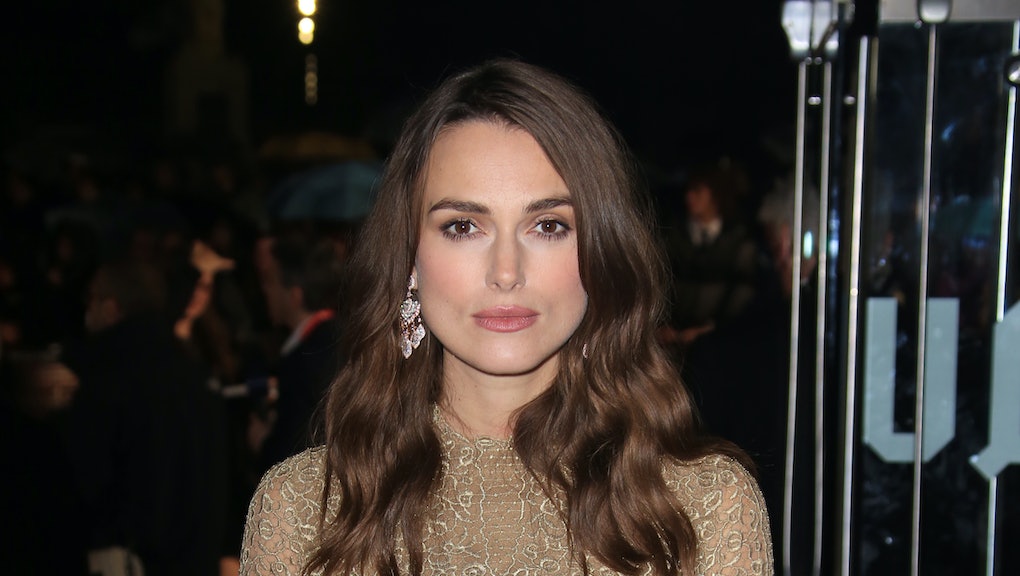 Keira Knightley Wants You to Look at This Topless Photo

If you're going to have Keira Knightley pose topless for your magazine, there's one rule you'd better follow.

"I'm fine doing the topless shot so long as you don't make them any bigger or retouch," she told British newspaper the Times of London. "Because it does feel important to say it really doesn't matter what shape you are."

The Imitation Game star made the comments in reference to her recent shoot for Interview magazine, which does indeed include a topless shot. Her frustration highlights a fundamental truth about beauty in the fashion and entertainment industries: No matter how famous or conventionally beautiful the actress, no one is safe from our ridiculous body image standards.

"I've had my body manipulated so many different times for so many different reasons, whether it's paparazzi photographers or for film posters," she elaborated to The Times. One of the more brazen examples of this absurd standard may be the poster for the 2004 movie King Arthur, in which Knightley was blatantly digitally edited to make her chest appear bigger:

Clearly that and other similar examples (including this airbrushed Chanel ad) have stuck with her. "I think women's bodies are a battleground and photography is partly to blame," she said. "You need tremendous skill to be able get a woman's shape and make it look like it does in life, which is always beautiful. But our society is so photographic now, it becomes more difficult to see all of those different varieties of shape."

If it seems absurd that a famous actress would need the help of Photoshop to sell her own movie, that's because it is. "Even Keira Knightley isn't good enough for us," that image manipulation implies. What kind of a message is that for movie studios and ad companies to be sending to young women?

And that's not even touching on the double-standard that exists between Hollywood's leading men and women. When was the last time Seth Rogen had to worry about his calves being too small?

These entrenched ideals are systemic and have existed for far longer than the 29-year-old Keira Knightley has been in show business. But it's encouraging that Knightley, as well as myriad other leading women, are becoming more and more open about their frustration. Marketers have started catching on over the past few years as well, with companies like Dove and American Eagle unveiling ad campaigns centered on women as they appear without manipulation.

It may seem strange that a company can earn plaudits just for not airbrushing the humanity out of their already-beautiful models, but that's the state of the industry. And it's also what makes the growing chorus voices like Knightley's that much more vital.