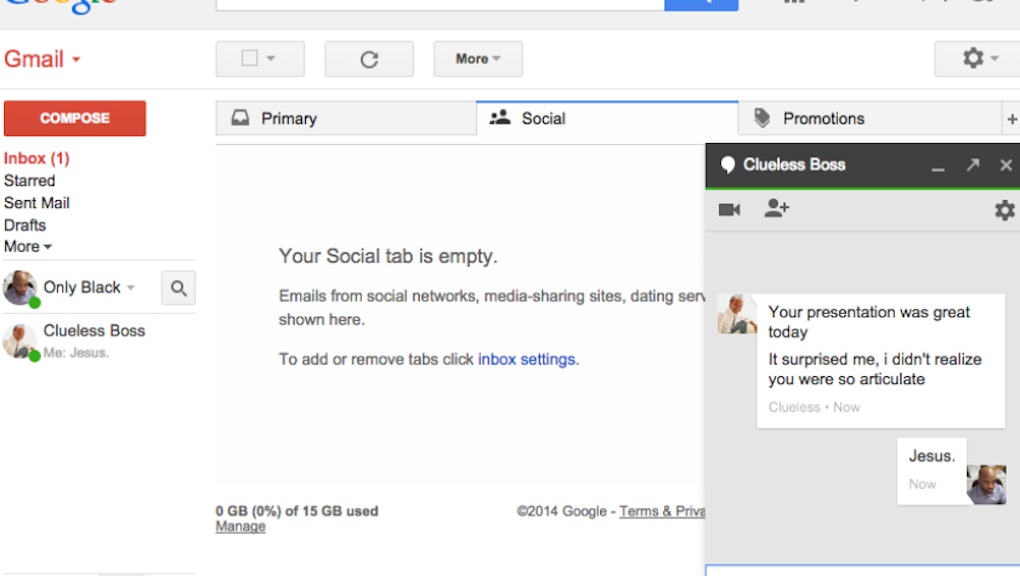 Ah, to be black and employed: A luxury afforded to so few historically, and no less so in these post-recession United States. Since 1974, the black jobless rate has hovered around twice the average, with no sign of wavering.

It's a cold, cold world. The results of these patterns include a persistent wealth gap and general inability to forge anything resembling long-term financial stability. Yet even aside from these, the challenges of being black in the workplace — especially black and alone in the workplace — can be relentless on their own, and more than a little exasperating.

Once you've successfully navigated hiring discrimination (still a thing) and the inevitable affirmative action snickering, interacting with clueless bosses and oblivious co-workers can be a fresh hell of its own. With email, messaging and social media at their disposal, your officemates have all the tools necessary to make your tenure at said company a daily series of hard facepalms.

And yet, you soldier on. Here are 11 Gchat conversations you've definitely experienced as the only black employee at your job:

In which your blackness makes you the go-to litmus test for all that is or is not politically correct in the world. Not always the worst idea.

In which all black people kind of look the same.

In which you're expected to keep tabs on every black artist's latest track.

In which a white co-worker sees a piece of media that makes them realize racism is still a thing.

In which speaking eloquently is assumed to be incompatible with being black.

In which failing to keep a toothy smile plastered on your face all day means you're angry.

7. The "You're Being Sensitive"

In which them being racist is your personal problem.

8. The "You Sounded Different on the Phone"

In which "sounding black" is a thing.

In which we all know what "shady" really means.

In which reinforcements arrive.

They really don't pay you enough.