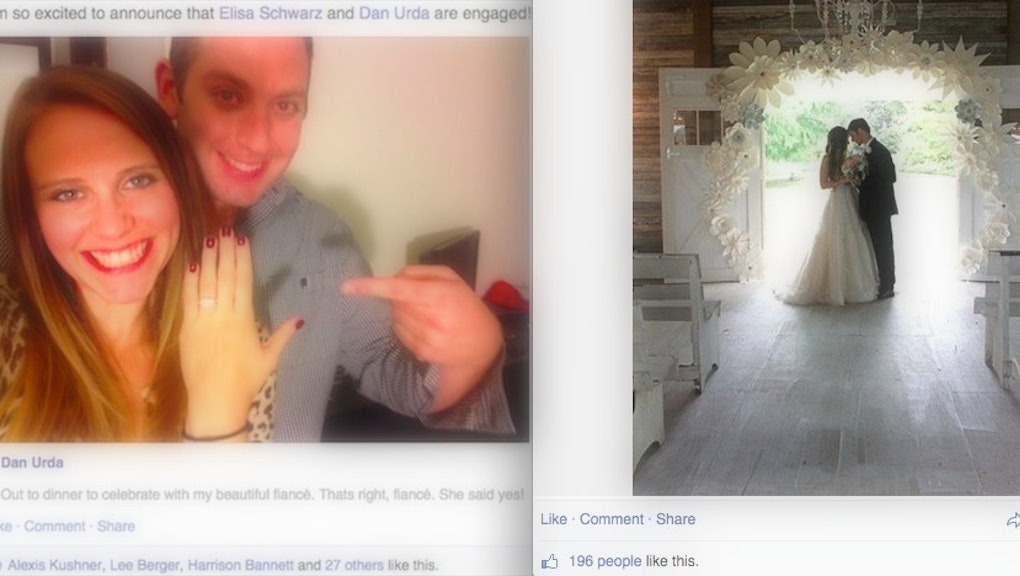 And as our lives go, so goes Facebook. For us, the traditional "milestone" benchmarks of maturity like engagements and weddings are Internet affairs, from the dramatic proposal photos (was someone hiding in the bushes?) to wedding albums with enough photos to mimic a livestream. And it's driving a lot of us crazy.

Why, exactly, do these photos trigger irrational rage spirals? It's not just that the marital bliss on display makes singletons jealous (although it does — more on that later). Or that the excessive cheesiness of the photos makes us cringe.

There's another compelling reason the Facebook milestone photos get under our skin: their apparent inauthenticity.

We're not simply grinches. We can enjoy these photos when they allow us to share in the happy couple's authentically joyous moment. "It provides an opportunity to celebrate," Carol A. Bernstein, associate professor of psychiatry at New York University, told Mic. "The capacity to share happy experiences with the people who matter to us, I think that's good."

But when the moments feel staged for viewers, or when the sheer volume of photos comes off as boastful, that's when we lose it.

"I feel like this is a new trend where everyone is taking these super posed, cliché photos and then posting them to Facebook, and I do not get it at all," said Ariella, 25, who lives in New York City. "Like, would I ever frame an 'artsy' photo of myself and said fiancé staring longingly into each other's eyes? No! Or how about a picture of us from behind holding hands walking through train tracks? No!"

That obvious lack of authenticity also crops up with proposal photos.

"I think proposal is a little odd because it's supposed to be a really intimate moment," said Helene, 24, also a New Yorker, "and it weirds me out that there are people hiding with cameras during your most intimate moment."

"It weirds me out that there are people hiding with cameras during your most intimate moment."

The issue, embodied by the perfectly sun-dappled photos, is that the oversharing reeks of unabashed self-presentation, and it betrays an uncomfortably obvious desire to post explicitly for others. We don't mind seeing your happy faces walking down the aisle — but you clearly want us to behold the picture-perfect mason jars and bridesmaid bouquets.

Our resentment of the photos isn't just Millennial cynicism — it's science.

Psychologist Gwendolyn Seidman, who studies romantic relationships on Facebook, told Mic that based on research, "People's reactions to overly mushy updates about their romantic partners is negative." A 2014 study noted that people find lovey-dovey couples on social media unlikable — that their Facebook updates are viewed as inappropriately personal, or that they are trying too hard to show off.

"Facebook is psychological theater," Robert Simmermon, an Atlanta-based psychologist dealing with mass media issues, told Mic. "In a way, it's similar to reality TV, that it's not really reality and we know it. The pictures can be reality, certainly, but they're very carefully edited and chosen before they're put up." In every facet of life, we choose to present ourselves in certain ways. But on Facebook, "the world's most disingenuous social network," we have increased control over our curated identities, actively deciding to post certain photos over others.

And the more obvious those posting decisions are, the more repellent they can be. "People tend to be able to detect narcissistic content on Facebook, suggesting that blatant self-enhancement doesn't go over very well," Seidman told Mic. The effort is too obvious, the concern for everyone else's approval too flagrant.

Are we just being bitter about others' happy milestones? In some cases, yes. "We compare ourselves to the photos," Simmermon said to Mic. "We can get caught up in that and idealizing that some people's lives are better than ours ... [and] we'll project onto the picture of how our lives are going."

That annoyance is often linked to insecurities. As Helene told Mic, "I am bitter and jealous ... and [milestone photos] make me feel like I am doing everything late." The pressure the photos put on us to fast-track our own relationships (or find relationships in the first place) can be overwhelming.

But, as Seidman pointed out, "not everyone will compare themselves to others to the same extent." And for those who do compare, it doesn't necessarily make them feel terrible: A 2009 study of Facebook use found that when used to actively connect with others, Facebook can make us happier. A 2010 study similarly found that active interaction with others (versus passive perusing) on Facebook increased positive feelings of bonding and connection.

Not everyone who finds Facebook milestone photos annoying is bitter, resentful or even single — there are plenty of married people who are all too happy to rant about other couples. It's that the oversharing of life's purest, happiest moments for everyone else's sake just feels wrong.

"Too much of anything is not fun for others," said Aviva, 25 from New York. Oversharing is showing off, and showing off feels about as authentic as those photos of you and your fiancé frolicking on abandoned train tracks.

Just give us one great photo — you can send the rest to your mom in an email.