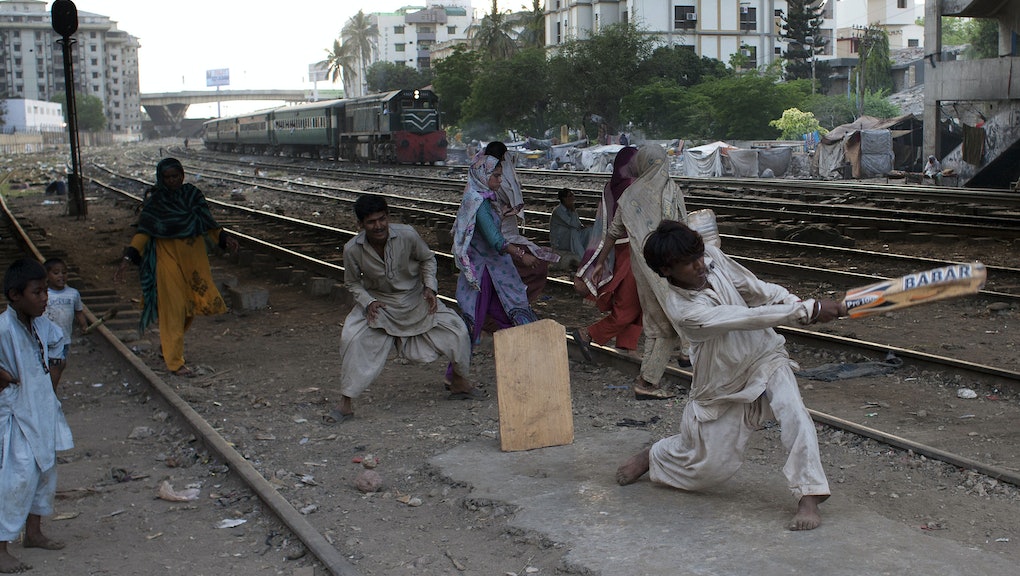 In a world full of war, strife and uncertainty, sports have an uncanny ability to bring people together. They also provide joy to people experiencing extreme poverty or tragedy, especially kids. The late Nelson Mandela described sports' positive impact best at the Laureus World Sports Awards in 2000:

For children who face challenges tougher than the ones many adults will ever face, sports can be a welcome respite, creating hope where there might only be despair.

These pictures are a reminder of the hope a simple game can inspire.

1. In a favela, a Brazilian boy finds joy in soccer.

In 2008, the Brazilian government implemented "pacifying" police units to reduce crime in its poverty-stricken favelas. But the overwhelming presence of patrols made living there feel like being under "armed occupation." Along with that, Amnesty International reported police abuse increased in Brazil "around protests in advance of the 2014 World Cup and during military operations in [favelas]."

When riots broke out ahead of the World Cup, the anger was aimed at the government, not the game itself. The game continues to have a place in the heart of its citizens, including that of Carlos Lucas, above, seen kicking a soccer ball around a favela in Brasília just weeks before the World Cup started.

2. Pakistani boys aspire for cricket greatness even without a field.

Cricket is the most popular sport in South Asia, particularly in India and Pakistan, which won the Cricket World Cup in 2011 and 1992, respectively.

Although Pakistan has experienced success in the cricket world, there is rampant poverty throughout the country. According to the Pakistan's Daily Times, about 60% of its citizens live below the poverty line, earning less than $2 per day.

But that hasn't stopped these Pakistani boys, who live in a slum in Karachi, from playing cricket. These kids don't let a lack of resources and equipment, like a proper wicket, keep them from playing the sport they love.

3. Filipino boys live out their hoop dreams amid rubble from a typhoon.

It has been a year since Typhoon Haiyan hit and caused major damage in the Philippines. According to the Toronto Star, the typhoon killed more than 6,300 people and damaged over 1 million homes.

After the disaster, images like the one above began circulating. This image stands out, showing the destruction the typhoon caused, a cargo plane getting ready to land and Filipino kids finding temporary comfort in a game of hoops.

In the midst of destruction and despair, this makeshift court provided joy.

This young player from Boca Chica, Dominican Republic, has his glove on and is ready for his turn on the dirt field. Baseball has been present in the Dominican Republic since the late 1800s, evolving into an important sport for the country.

Dominicans are by far the most prevalent foreign nationality in America's major league baseball teams, with about 10% of the league's players born in the Dominican Republic. Many current superstars, including Albert Pujols, Robinson Cano and David Ortiz, were born in the country. Some of these players must overcome extreme poverty to reach their dreams.

The Dominican Republic's poverty level, which was about 41% in 2012 according to the World Bank, continues to pose a major problem. But kids from impoverished backgrounds throughout the country play on dirt fields, hoping to acquire the skills to make it to the majors while finding joy in playing in the moment, even if they don't make it to the big leagues.

5. A Chinese boy defies the devastation of an earthquake with a game of table tennis.

Even though China's interest in table tennis is waning, it is still home to some of the best players in the world. China swept the gold medals for men's and women's table tennis in the 2012 Olympics in London, and the sport continues to be very popular in the country.

In 2008, a 7.9 earthquake hit the Sichuan province of China. According to the BBC, more than 87,000 people were killed or missing and almost 5 million were left homeless.

As refugees from the earthquake line up for food in the background of the picture above, two survivors play table tennis. This is just another example of a child finding some levity, at least momentarily, in a very uncertain situation.

6. A Syrian girl turns a refugee camp into her soccer arena.

Since March 2011, the Syrian civil war has killed about 200,000 people. Syria has long been plagued by violence under the dictatorial leadership of Bashar Assad, and is now dealing with the presence of the Islamic State. In light of the humanitarian crisis, neighboring Jordan has taken in about 600,000 Syrian refugees.

The girl in the picture above is a refugee from earlier in 2014 at the Zaatari camp close to the Jordanian city of Mafraq. The refugee camp has its own soccer league, according to Getty Images.

The children of Syria have experienced a lot chaos during the war. But they're entitled to enjoy a game of soccer like anyone else.

7. A Senegalese boy uses rugby to work toward greater opportunity.

Many people in Senegal, like other countries listed, live in rough economic conditions. According to the World Bank, about 47% of the Senegalese live at "national poverty lines."

The House of Rugby center introduces the sport to poor Senegalese kids near Dakar, according to Agence France-Presse, and it offers resources not normally available to these kids.

And, as demonstrated in the picture above from 2011, the sport provides opportunities and puts a smile on their faces.

As Mandela said, "Sport has the power to change the world. It has the power to inspire," and this is true even for kids facing the most difficult of circumstances. While war, natural disaster and inequality darken reality worldwide, sports offer a ray of light.