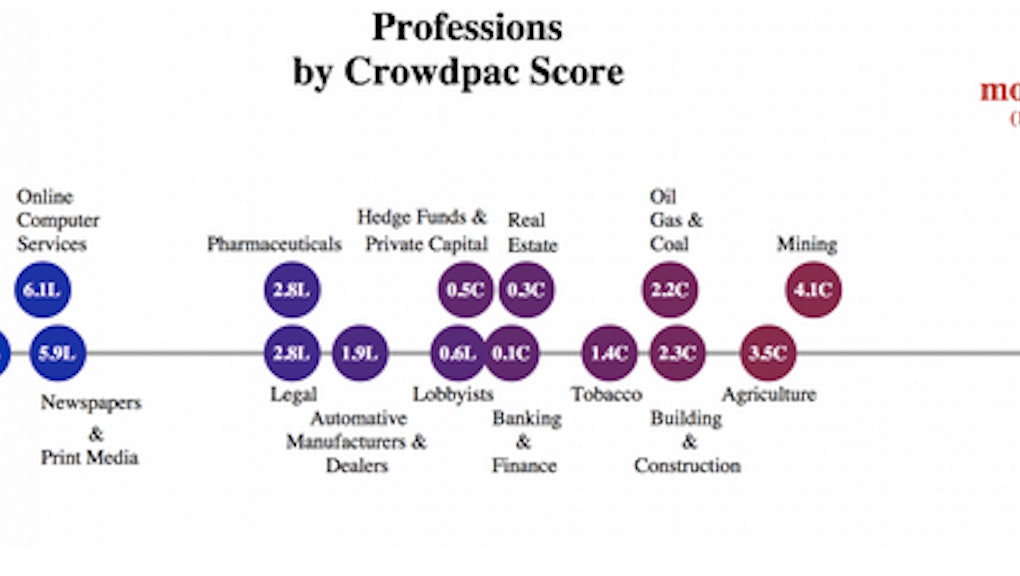 How Politically Biased Is Each Industry? Check These Charts

The news: The midterm elections this week demonstrated how sharply partisan politics are divided across age, gender and race groups. But what about different industries?

This week, political analysis firm Crowdpac released a report determining the political bias of different professions, based on campaign contribution data from individual donors dating back to the '80s. The resulting analysis lets us see where various industries fall on the political spectrum:

"In compiling all this data, and building these tools, we have the opportunity to shine some light on the political system and reveal some interesting insights and trends," Crowdpac CEO and co-founder Steve Hilton told Business Insider. "For example, our real data conforms with the claims that have been circulated about the extremely liberal profile of the entertainment and media sectors."

Let's dive in for a closer look.

It looks like there is some basis for conservatives' frequent complaints regarding the "liberal media" — the vast majority of political contributions made by people in the media went to liberal candidates.

The same goes for the entertainment industry; it looks like some celebrities really do "Turn Out For What."

Silicon Valley is predictably a liberal stronghold: Among tech firms, Twitter is the most liberal, with 100% of its employees' donations going to liberal candidates.

There are a sizable number of conservative donors in the pharmaceutical industry, but most people are pretty liberal.

Those in the legal profession are more evenly divided, although they still skew to the left.

Agriculture is a solidly conservative field.

The same conservative leaning can be seen with people in the construction industry.

While coal states have been traditionally Democratic, West Virginia's rightward turn is another indication of liberals turning away from the industry.

Other energy industries aren't popular with liberals either.

People in real estate are rather divided about politics, though donors were more likely to be conservative.

But things look more evenly distributed among those in hedge funds and private capital.

As to be expected, lobbyists are spread fairly evenly in their donations, though there are few middle-of-the-road donors.

The automobile industry is rather polarized, though there are a lot of donors to liberal candidates.