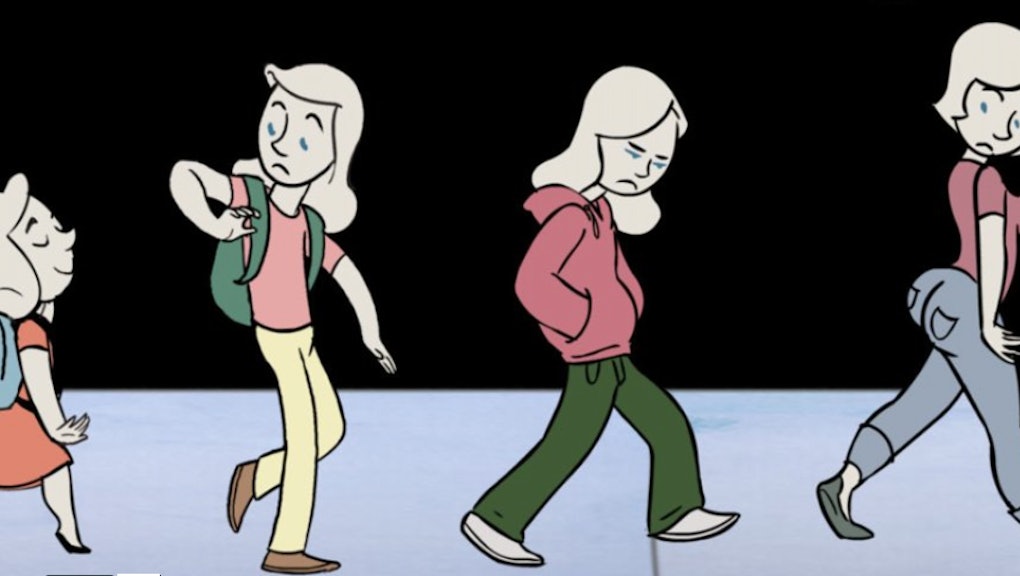 Catcalling is just one experience a woman has while walking through life.

The thought-provoking, critically acclaimed animated short "Sidewalk" narrates a woman's life through walking. In just over a month, the video has garnered over 3 million views online. The four-minute clip was created by Celia Bullwinkel and includes with a soundtrack that may make you think of Peanuts.

From being a young girl and seeing billboards advertising femininity, to feeling her breasts bounce while going through puberty, the video shows that catcalling is one single aspect of a what it means to walk through life as a woman.

The character shows that being harassed may lead to a woman's own internal reconciling of how her body changes through life, from puberty through maturation — breasts pop, peak, droop and wither even as standards of beauty stay generally the same. As evident by the cartoon character's facial features and body expressions, the moment a woman comes to accept a new change in her body is the moment it changes again.

Or, if she accepts it, she's made to feel uncomfortable by it because of others' reactions to her body.

At the end of the day, life as a woman is about acceptance.

"I find that body acceptance is important. Learning to love how your body is always changing, it's an organic thing," Bullwinkel told ThinkProgress. "It's allowed to grow and expand and shrink and do amazing things like produce lives. And I really think that people who try to fight that, whose bodies are not in the realm of their control, I think [struggle]. I hope this film will help them realize that this is what your body is meant to do, and it's OK. Everyone ages. We all do it, and why not do it together?"

Bullwinkel said the video does not present an aspirational or universal take on the life as a woman. Every woman's experience is different, and it's important to interrogate why, for example, the older version of the animated woman appears to seek out public approval whereas her younger self shirked it.

"When you grow up in a culture like this, you come to expect validation in negative ways. It becomes acceptable," she said. "And so I wanted to tell this like a parable. It's a story about a woman who kind of buys into it. I know it's not aspirational, as a lot of people who viewed the film wanted it to be.

"But I wanted it to be honest, I wanted to reach the people who, maybe they're not conscious of it, but they kind of do rely on [catcalling] as a way of telling you that you're OK. That yes, you are valuable."

The woman in the video, Bullwinkel said, is the happiest when she feels good about herself and is taking care of herself. And, to some viewers' chagrin, this happiness doesn't come with motherhood, a reflection of the animator's own admitted biases and preferences.

"She's happiest when she establishes herself in the career," she said. "[As] soon as she feels good about herself and things are going great career-wise, she meets someone and gets pregnant. And she can't live for herself anymore — she has to live for someone else. I don't show that she still has a job, but more or less — and I know this isn't true, but it's based on my own phobias."

While not always the most cheery, the video manages to end on an optimistic note when the main character realizes she can use her own experiences to help other young girls.

"Sidewalk" only portrays one specific type of woman — a white, able-bodied woman who appears to have a financially stable life. In the wake of the viral street harassment video by Hollaback! — while thought-provoking was rightly criticized for inadvertently perpetuating racial stereotypes — it's important to acknowledge that no woman's experience should be viewed as universal.

At the same time, Bullwinkel's cartoon effectively shows that women have to learn to deal with a variety different kinds of macro and micro aggressions — not simply catcalling — throughout their life, just because of their gender.