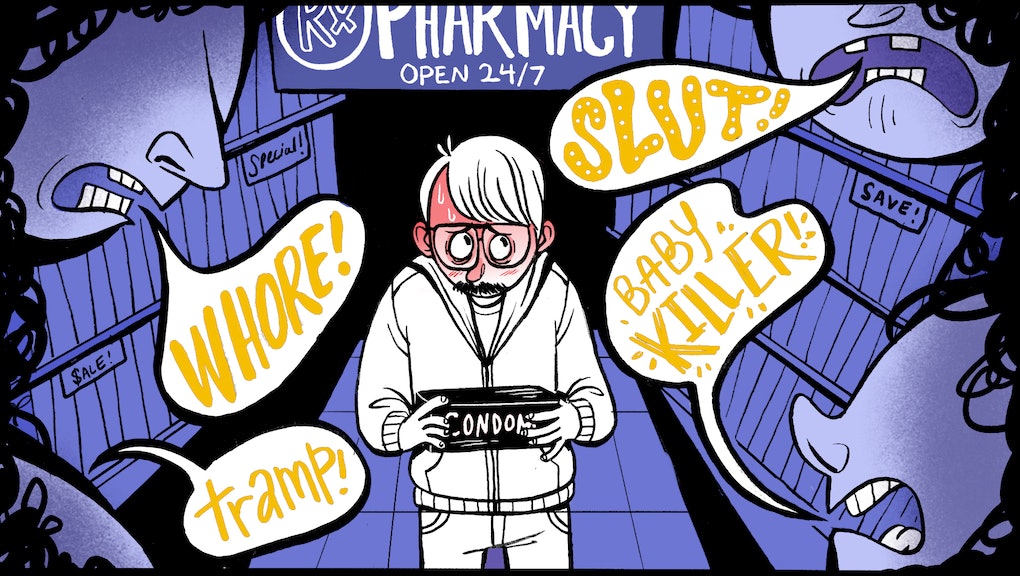 If Men Faced What Women Do for Buying Birth Control, Here's What It Would Look Like

These are just some of the insults lobbed at women on a semi-regular basis, simply for taking control of their reproductive health. But what if the tables were reversed? Following a midterm election cycle that passed what might be the most restrictive anti-abortion measure in the country, it's worth thinking about what would happen if men were tasked with family planning.

Would men be forced to endure the same kinds of stigmas and shame as women? In a cartoon created exclusively for Mic, artist Mady G flips the script, imagining an alternate reality where men walk a reproductive rights gauntlet, complete with slut-shaming rhetoric, body policing and moral hyperbole:

The role-reversal is illuminating, especially because male birth control is no longer a science fiction fantasy. In fact, it could be a reality by 2017, if human trials for Vasalgel go well. This reversible, non-hormonal birth control is a polymer hydrogel injected into the vas deferens to block sperm. If its developers at the Parsemus Foundation have their way, it won't break the bank, either.

If such a potential breakthrough sounds unfamiliar, it's probably because while there have been several attempts to get male birth control on the market, none have come to fruition yet.

Stalling out: Why the lag in research and development of male birth control? It likely boils down to two great American principles: money and power. If male birth control, like Vasalgel, is indeed inexpensive with long-lasting results, the pharmaceutical industry wouldn't make a profit and therefore might not be interested in its advancement.

What's more, the 11 biggest pharmaceutical companies are all run by very powerful, very wealthy men. One has to wonder what could motivate them to disrupt the power structure that places the responsibility for birth control (as well as the cultural stigmas and political scrutiny that come with it) squarely on women's shoulders.

The reality is, men do not have to deal with these stigmas. Birth control has been couched from the beginning as a "woman's" issue, despite common sense dictating that men have a stake in family planning too. This branding may demotivate men to demand their own form of contraception. Besides, given the demonization of birth control, men may want to steer clear of it altogether.

Avoidance isn't a solution: It's unlikely men will ever have to experience the social, medical, legal and political hurdles women face simply to control some cells in their bodies. But they shouldn't have to. Birth control should not be controversial.

The fact of the matter is, birth control is good for society. It has multiple socioeconomic benefits, like increased social autonomy for both men and women, improved health outcomes and greater educational and employment opportunities. It also undeniably helps reduce the rate of abortions.

A shared responsibility for birth control would go a long ways towards not only reducing unintended pregnancies, but getting Americans in line with the concept of birth control as a human right. Male contraception would be a strong step in the right direction. Now we just need to make sure it actually happens.