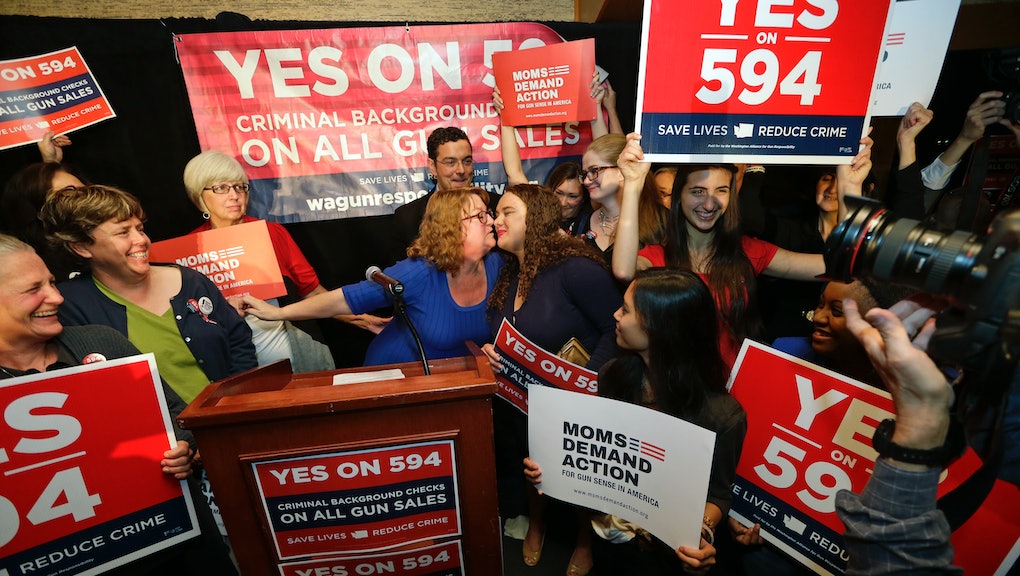 The Other Historic Loser on Election Day? The NRA

Gun control advocates scored a double-victory in Washington state on Election Day, passing a ballot initiative to expand background checks while soundly defeating a measure that would have wiped all state gun laws off the books.

The results have the National Rifle Association reeling. They were outflanked by opponents who invested more in direct appeals to voters, the NRA's time-tested method of spending millions to buy off and intimidate legislators failing them on this unfamiliar battlefield.

The first, Initiative 594, was approved by 60% of voters. The new law requires criminal background checks on all gun purchases. This closes what has long been described a "loophole" in federal law that allows individuals to buy firearms from other private citizens at gun shows and elsewhere without being checked.

Not going quietly: In a turn from previous gun control fights, the NRA was met significant with opposition — and more importantly, spending — this year, as wealthy supporters threw down more than $10 million for the cause. Former New York City Mayor Michael Bloomberg's "Everytown for Gun Safety" spent $4 million to help organize and turn out voters, and the Bill and Melinda Gates Foundation donated another $1 million.

In response to I-594's appearance on the ballot, opponents of gun control — the state's Second Amendment Foundation — put up an opposing measure, Initiative 591, which proposed to wipe all background check laws off the books "unless a federal standard is established." It was defeated with 55% voting "No."

Seattle's Mayor Ed Murray, a vocal supporter of I-594, applauded the results.

"States with universal background checks have fewer women killed in domestic violence situations, fewer law enforcement officers shot and fewer firearm suicides," he said of Tuesday's votes. "As the first state to pass this by popular vote, Washington has sent a message of hope to other states that progress is possible."

What's next? The results in Washington have gun control activists talking about a new way forward. MSNBC reports that on two occasions since 2013, state legislators failed to pass background-check bills similar to the one approved by voters Tuesday.

"The NRA might be able to intimidate Washington, D.C., and state legislators, but they don't intimidate American voters – and we expect to prove this again in Nevada where signatures are currently being gathered to put background checks on the ballot there, too," John Feinblatt, president of Everytown for Gun Safety, said in a statement late Tuesday.

Success in Nevada would be a game-changer. The state is home to some of the nation's most relaxed regulations, according to the Brady Campaign to Prevent Gun Violence, which graded it a 5 on a 1-to-100 scale for the strength of its laws in 2011.

Many gun control supporters took the federal government's failure to act after the Sandy Hook school shootings in Newtown, Connecticut, as proof that the NRA was invincible and new gun laws were impossible. But this week's results in Washington — and new laws enacted in 8 other states since the massacre — show that there is a way forward. The all-powerful gun lobby finally has something to fear.