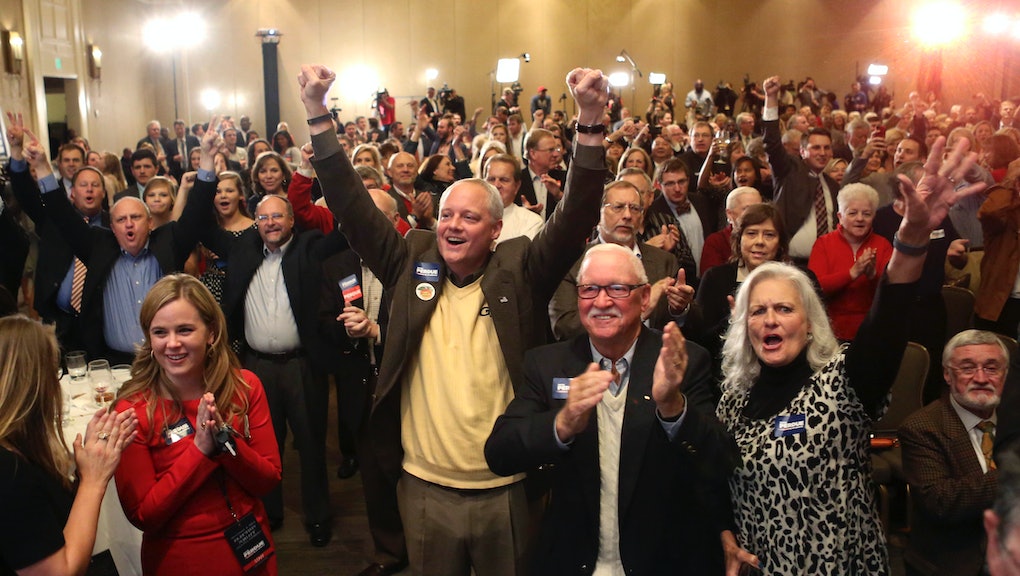 12 Important Takeaways to Remember From the 2014 Midterms

Bloodbath. Landslide. Slaughter. Blowout. Clown show. Red Wedding. Whatever you want to call it, Tuesday was a tough night for Democrats, as Republicans rode a wave of voter discontent to increase their lead in the House of Representatives and retake the Senate. Here are 12 takeaways from Tuesday's circus to learn from as we start the inevitable march toward 2016:

1. Democrats had a worse day than expected.

Nobody expected Democrats to have a great day, but as the vote tallies are being finalized, the extent of the damage is staggering to behold. The GOP picked up seven seats in the Senate (for now) and earned the largest House majority since World War II. Any way you cut it, Democrats are justified in having a case of the gloomies.

2. The electorate favored Republicans, but that's not an excuse.

Partially to blame for Democrat losses was a historically low turnout, especially among young people. Millennials, who accounted for 19% of the electorate in 2012 and broke for Democrats by over 10%, were only 13% of voters who showed up this year.

Coupling that with voter suppression issues in multiple states, many Democrats have turned to blaming the Republicans and the makeup of the electorate for their losses. But the electorate is what it is, and failures in turnout are hardly the fault of the GOP. Old white people came out and it showed. Democracy is a participation sport – blaming the folks you failed to convince off the bench is laughable.

On the other side, we learned that Democrats didn't just have a tough time at the national level – they were also pretty awful at running for governor. With Republicans picking off true blue governorships in places like Maryland and Massachusetts, the GOP increased its total number of governors to 31 out of 50.

Speaking of beating back the tea party, the GOP establishment has finally figured out how to kill challenges from the right: Drown them in dollars. After losing multiple cycles thanks to flawed candidates from the fringes, the GOP took the hint and decided to smother challengers in the crib rather than try and ride them through the general election.

The walking caricature of the GOP establishment, Sen. Mitch McConnell (R-Ky.), won a resounding victory and is expected to become majority leader of the Senate in January when his party takes power. With his new reign, he has the potential to really raise the visibility of the Republican Party nationally. Whether anything productive comes of that raised visibility remains to be seen.

The staggering $3.7 billion both parties sank into the midterms tells us that big money isn't going anywhere. With the GOP spending $1.92 billion, mainly to fight off tea party challengers in the primaries, the soft money arms race is only going one direction – up.

7. Marijuana and minimum wage were bright spots for progressives.

These poor outcomes for the Democrats happened despite widespread voter approval of traditionally core progressive issues like minimum wage hikes, firearm background checks and marijuana legalization. We can expect this trend to continue, despite conservative gains on the Hill.

8. We'll get plenty of face time from the new Republican senators.

Not all GOP senators winning election are old hands or look like turtles, though. Newly elected Iowa Sen. Joni Ernst is the new jewel of the "Mama Bear" crowd. With a promise to make Democrats in Washington "squeal" like she did the hogs she slaughtered growing up, Ernst is set to join Sen. Ted Cruz in making a splash as the new shining face of Washington outsiders inside Washington.

9. There were several historic firsts for the Republicans.

The GOP also sent their first African-America senator to Washington since the 1870s, before the 17th Amendment electing senators by popular vote even existed. South Carolina Senator-elect Tim Scott represents the first step in the slow fight to diversify the otherwise monochromatic face of the Republican Senate. Utah's Mia Love delivered another true first for the GOP, becoming the first female black Republican to be elected to Congress.

That said, the unhappiness with both parties may be a little overstated. Very few House incumbents actually lost their re-election bids, suggesting that Americans are generally OK with the job their representatives are doing. That, or we've gerrymandered electoral districts so much that they're hardly competitive.

11. ...and the Republicans aren't going anywhere.

On that note, it's unlikely we'll see a Democrat majority in the House until the next redistricting in 2020. With 2010 redistricting mostly set in stone, Republicans were able to secure very favorable lines that delivered a 2012 House majority despite losing the popular vote by 1.2%. Don't expect anything to change until the next census, if then.

Finally, in case you were worried, the race for 2016 is in full swing. Republicans quickly started trying to tie Obama's failures to Hillary Clinton in an effort to weigh down the former secretary of state before she formally announces her eventual run. If you thought 2012 was a zoo, just wait until Hillary gets put on the presidential pedestal. Between Clinton baggage and the perpetual circular firing squad that is the Republican Party, 2016 promises to be more fun than ever before.